The "Hollywood Nazis" of the National Socialist Movement have imploded in a debacle featuring hate-radio jocks, anti-racist provocateurs, superhuman egos, allegations of underage sex, and Satan.

It couldn't have been scripted any better in Tinsel Town. After surging ahead of the sieg-heiling pack in membership and notoriety, the "Hollywood Nazis" of the National Socialist Movement have imploded in a debacle featuring hate-radio jocks, anti-racist provocateurs, superhuman egos, allegations of underage sex, and Satan.

The party's problems began last June, when Citizens Against Hate discovered that NSM's Tulsa post office box was shared by The Joy of Satan Ministry, in which the wife of NSM chairman emeritus Clifford Herrington is High Priestess. Knowing that NSM ally and hate-radio host Hal Turner was a Catholic-raised convert to the white supremacist theology of Christian Identity, the anti-racist group decided to plant a metaphorical banana peel under NSM's unsuspecting jackboot.

In early July, Citizens Against Hate member "Tony Willow" called in to Turner's show (that night featuring NSM Minister of Information Michael Blevins) and informed him of the Satanic connection. The hate-jock took the bait. On July 3, Turner posted a message on his website declaring that unless NSM severed all connections to Satanism, the group would no longer have access to free or discounted air time on the Turner Radio Network. Within NSM ranks, meanwhile, a bitter debate was sparked over the propriety of Herrington's Joy of Satan connections.

Appearing on cue to keep things rolling was none other than Bill White, the irascible and pompous 29-year-old NSM media handler and veteran of extremist causes and groups across the left-right spectrum. As Citizens Against Hate had hoped, White responded to Turner with a snap and a snarl, both defending Mrs. Herrington's membership in the Joy of Satan -- "Her religious views are very similar to the Radical Traditionalism and Aryan Paganism shared by most of the NSM's leadership," he wrote -- and questioning Turner's motives for threatening the NSM.

The real reason for Turner's attack, White strongly implied, was money. "Turner," White wrote, "has been needing additional cash to maintain his radio network for several months, and has been negotiating for additional fees from the NSM for several weeks."

In response to White's rebuttal, a furious Turner promptly cancelled NSM's program. "This man," wrote Turner of White, "[has] wrecked the NSM radio show on the biggest pro-white media outlet in the world. How much more damage is Bill going to be allowed to do before somebody puts a stop to it?" 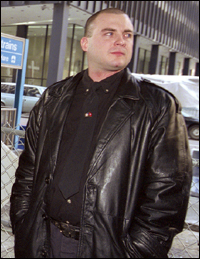 NSM Chairman Jeff Schoep took the question seriously. Schoep soon suspended White in an attempt to muzzle him and put an end to his prolific Internet rants, which increasingly took aim at both Turner and Christian Identity, the Aryan-Jesus cult claimed by many NSM members.

Though self-defeating from a movement perspective, White's impolitic attacks on Christian Identity shouldn't have surprised anyone familiar with his career. The outbursts were just a loud return to form for the ex-anarchist and inveterate iconoclast. Just as White had rebelled against local police and his teachers as a teenager, he lashed out against Shoep's suspension order and increased his attacks. Schoep then expelled White. "Instead of choosing to correct his behavior," explained Shoep of the quick escalation from suspension to expulsion, "Bill chose to rebel against the NSM rules of conduct. Instead of adjusting to discipline and taking the moral high ground, Bill has demanded apologies."

With White still squealing in the background, Schoep moved ahead with damage-control operations by nudging chairman emeritus Herrington from his position under the cover of "attending to personal matters." But it was too late to stop NSM Minister of Radio and Information Michael Blevins, aka Vonbluvens, from following White out of the party, citing disgust with Herrington's Joy of Satan ties. "Satanism," declared Blevins in his resignation letter, "affects the whole prime directive guiding the [NSM] -- SURVIVAL OF THE WHITE RACE."

Following his expulsion, White wasted no time before drafting a hilariously self-important declaration of independence, which opened with a racist twist on Thomas Jefferson's famous prose: "When in the course of human events, it becomes necessary for a group of Aryans to dissolve the political bands which have connected them with one another, and to assume among white people that separate station to which their race entitles them..." Et cetera. And then: "We hold these truths to be self-evident: that Adolf Hitler was the living instrument of God on Earth, that he was endowed by the Creator with the qualities of our ancient Heroes, and that the movement which he founded is the only means by which white people can possess life, liberty, and the pursuit of happiness."

Nine hundred words later, White concluded by solemnly announcing the formation of "the American National Socialist Workers Party" and naming himself commander. He claimed the allegiance of more than 130 current and former NSM leaders and members.

Though White almost surely exaggerated this figure, NSM was now a Noticeably Smaller Movement, one trailed in extremist circles by a strong whiff of Satanism and related charges of sexual impropriety associated with Joy of Satan initiation rites and curiously strong teen recruitment efforts. 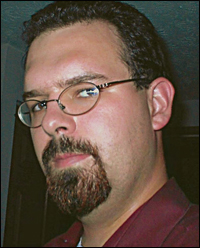 As he seeks to rebuild his weakened organization, Shoep no doubt rues the day he accepted Bill White into the NSM fold. In his letter explaining White's expulsion, he admitted that "literally countless individuals and groups ... warned us he would stab us in the back ... the first time something didn't go his way." White's track record was so bad that even at the apex of NSM glory, after it sparked nationally covered race riots in Toledo, Ohio, last October, the anti-fascist One People's Project held a poll asking how long it would take Bill White to destroy the group from within. More than a third of respondents said less than a year.

It shouldn't have taken outside consultants or polls to show that Bill White was organizational poison. The slumlord from Roanoke, Va., has a lengthy record of disruptive behavior and very little history of taking orders or staying "on message" for long, especially as required in a top-down neofascist organization like the NSM -- which is why White probably isn't too bothered by his apparently bleak future in the world of the organized radical right.

To adopt the language and tone of White's Declaration of the American National Socialist Workers' Party: Prudence dictates that the fact of White's unpopularity and irrelevance be now submitted to a candid world.