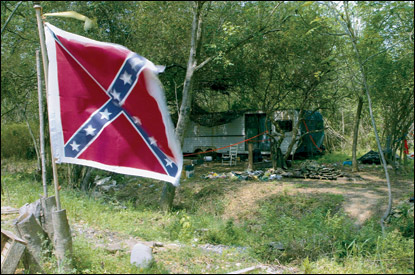 COLLINSVILLE, Ala. — Residents of this small town in the piney woods of DeKalb County knew Jeff Osborne as a wooly-bearded Vietnam veteran who dressed in a dirty Confederate army replica uniform and carried an old Army-issue 9 mm pistol in a shoulder holster. He scraped out a living selling surplus military gear from a used camper shell he purchased for $400 and occupied in a squatters' camp. Though he occasionally muttered about the looming collapse of the American economy, terrorist attacks and Mexicans taking over the country, for the most part Osborne seemed like a harmless local eccentric.

Then, in the pre-dawn hours of April 26, federal and state law enforcement officers raided his camper shell along with several other residences in the Collinsville area. They rooted out 130 homemade hand grenades, an improvised grenade launcher, a Sten Mark submachine gun, a silencer, 2,500 rounds of ammunition and nearly 100 spindly marijuana plants. Five men were arrested on illegal weapons and explosives charges, including the man known to his neighbors as Jeff Osborne. Federal agents said his real name was Raymond Dillard.

Dillard, 46, was a fugitive from justice. He failed to report to his probation officer after doing jail time for burglary in Mobile, Ala., in the mid-1990s. He is also a petty liar. Although Dillard did serve in the U.S. Marine Reserve for two years in the early 1980s, he's too young to have fought in Vietnam, as he told several of his neighbors.

But the Bureau of Alcohol, Tobacco, Firearms and Explosives (ATF) didn't come to Collinsville to bust Dillard for skipping out on his probation or spinning fairy tales about his military service. According to the feds, Dillard was the founder and self-appointed commander of the Alabama Free Militia, a heavily armed band of paranoid extremists with a taste for doomsday fantasies, homemade explosives and illegal firearms.

"We got the core group, the core leadership and most or all of their significant ordnance," announced Jim Cavanaugh, the ATF's southeastern United States regional director. "They had enough to outfit a small army."

Making the Case
At a May 1 bail hearing, ATF agent Adam Nesmith seemed to testify that the government had evidence of the five militia members plotting a machine-gun attack on Mexican immigrants in the nearby town of Remlap. Nesmith described a reconnaissance mission the militia allegedly conducted in Remlap and told the judge, "There was a plan to attack a group of Mexicans in the Remlap area with their machine guns." The judge denied bail, and the alleged backwoods militia machine-gun plot made news across the country. One typical headline the day after the bail hearing read, "Alabamians planned to machine gun Mexicans."

But there is no mention of any specific plan to kill Mexicans in the search warrant affidavits or any other court document related to the Alabama Free Militia defendants, and the ATF says Nesmith's testimony was misconstrued. Cavanaugh told the Intelligence Report that Nesmith did not mean to suggest that the defendants plotted to machine-gun Mexicans. What Nesmith meant to convey, Cavanaugh said, is that the militia members were planning to steal machine guns from Mexicans in Remlap — not to shoot the Mexicans with machine guns. "The purpose of the [reconnaissance] trip described by the agent in the testimony was to go to those Latinos and take their machine guns, which the militia believed them to possess," Cavanaugh said.

All five defendants have court-appointed attorneys. They portray their clients as bumbling survivalist wannabes who are being tried in the media as dangerous extremists and railroaded by overzealous prosecutors. "These were a bunch of country boys who liked to blow things up," one of the lawyers said.

The attorneys point out that the widely reported machine-gun plot did not actually exist and insist that the government has not presented any evidence that the militia members ever actually detonated a single grenade, harmed anyone or even specifically planned to do harm.

"You ever hear the phrase, 'Making a federal case out of it?" said court-appointed attorney Scott Boudreaux, whose Birmingham, Ala., law firm is representing three of the defendants. "This is it."

Race War
According to investigators, Dillard began recruiting and designating ranks for the members of his militia sometime last year. He made himself a "major" and initially took up the name Alabama Naval Militia, a curious choice considering that Collinsville is 330 miles northeast of Mobile Bay, the nearest salt water. The militia was headquartered in Dillard's camper shell, which he painted to blend with the surrounding trees and shielded from overhead view under a canopy of camouflage netting. Fellow squatter and militia member James McElroy, a 20-year-old Iraq War veteran, lived in a makeshift tent nearby. Dillard assigned McElroy the rank of "private." 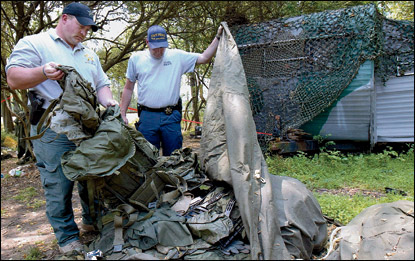 The owner of the land where Dillard and McElroy squatted, Joanne Gunnin, said that in late 2006 Dillard showed up at her house unannounced and bearing medical manuals and a military uniform. Gunnin, 72, told The Huntsville Times that Dillard pressured her to become the nurse of a hazily described covert paramilitary outfit.

"I tried to get him to tell me the name of his organization," Gunnin said. "He said, 'We're just a group that will be here after the government falls apart.'" Gunnin turned down the offer.

A couple of months later, Gunnin gave a group of Guatemalan immigrants permission to play soccer on her property in a vacant field across from the squatter's camp. According to several of Gunnin's neighbors, McElroy became enraged when he saw the Guatemalans tending the field and yanked one of them away from a lawn mower. The man fled, according to Wayne Dunn, who lives nearby. Dunn's 16-year-old nephew called the police after witnessing McElroy's outburst. Dunn told The Huntsville Times that Dillard gave his nephew a warning shortly after that: "He needed to make up his mind whose side he wanted be on, the Mexicans' or Americans'," Dunn said. "The main thing [Dillard] always told me was there was going to a war between the Mexicans and whites."

Aryan Nations Connection?
One of Dillard's regular military surplus customers was 30-year-old William Bryant "Red" Watson, a member of a tiny northern Alabama-based remnant of Aryan Nations, a violent neo-Nazi group formerly based in Idaho. In February, Watson was arrested for possessing bomb-making equipment and distributing crystal methamphetamine. Law enforcement authorities said his purchases from Dillard, however, were innocuous.

Even so, Watson was under surveillance and his repeated visits to Dillard's camper did not go unnoticed by law enforcement agents who were hearing rumors of a newly active militia group in the area.

Dillard also hawked his wares at Collinsville Trade Day, a sprawling flea market that attracts as many as 30,000 visitors every Saturday. Merchants in corrugated tin stalls that rent for six dollars a week sell livestock, produce, artwork, pesticides and, on at least some occasions, illegal firearms. (Last year, federal agents charged 11 men with selling unregistered guns at Trade Day. In 2001, four Trade Day dealers were arrested for selling guns to minors.)

Early this year, Dillard met a man at Trade Day he recruited to join the militia. This man, who Dillard made a sergeant, turned out to be a paid federal informant. In court, ATF agent Nesmith testified that the informant called Nesmith's office last March 20 to report seeing a pile of grenades at Cunningham's house during a militia meeting. ATF agents directed the sergeant to start wearing a wire and continued paying him to attend militia meetings.

During the May 1 detention hearing, Nesmith detailed the role the informant played in a shopping trip for grenade-making materials with Cunningham and Dillard last April 20, the same day as the alleged "recon mission" to Remlap. Under cross-examination by court-appointed defense attorney Harold Dodd, who represented McElroy, agent Nesmith said that the informant drove that day because the other militia members did not own a car and that the informant himself paid for black powder at a pawn shop, put the powder in the trunk of his car, dropped off Cunningham and Dillard, and delivered the evidence to Nesmith's office.

"The only person who has done a lot in this is the informant," Boudreaux complained. "And there's no telling what they promised him."

The informant told the ATF that Dillard repeatedly ordered militia members to open fire on federal agents if ever confronted by them. But no shots were fired during the April raids. In fact, Dillard cooperated, even pointing out booby trap tripwires to bomb squad agents. "It did surprise me that it went peacefully," DeKalb County investigator Jones told the Report.

"Hughes was engaging in activities that were extremely dangerous for our citizens," said DeKalb County Sheriff Jimmy Harris. "I am glad that a guilty plea has been entered and that he will no longer have an opportunity to put our people at risk."

The other four alleged militia members, including Dillard, pleaded guilty the following day to criminal conspiracy as well as illegally making and possessing destructive devices. They face prison sentences ranging from 10 to 50 years. (Dillard also pleaded guilty to being a felon in possession of a firearm.)

At their plea hearing, the men all denied being members of a militia. They said they stockpiled weapons out of fear of terrorists, economic collapse and martial law. "We were scared that some things might deteriorate into some bad things over here, that there could be some more foreign terrorist attacks, and we were just getting ready to defend ourselves," said Dillard.

McElroy told the presiding federal judge that he just "got together with some boys to make some grenades."

"We were just building them to protect ours and our own," McElroy said.

"You were afraid of terrorists coming to DeKalb County?" the judge asked.

"To the United States, your honor," McElroy replied.

On June 28, federal agents arrested a sixth man in connection with the Alabama Free Militia case. William James Hudson, 56, was charged with illegally possessing a machine gun that was recovered when federal agents searched his Birmingham home. According to the ATF, Hudson was a self-appointed "colonel" in the militia.

"The arrest of Hudson was the result of our ongoing investigation into the Alabama Free Militia, a case involving a great deal of illegal explosive devices and other weapons," stated Cavanaugh.