The vicious talk at the white supremacist "Rally Against Black Gang Terrorism" in Kalamazoo, Mich., last Aug. 4 didn't come as much of a surprise to anyone. After all, the speakers included some of the most hard-line racists in America. 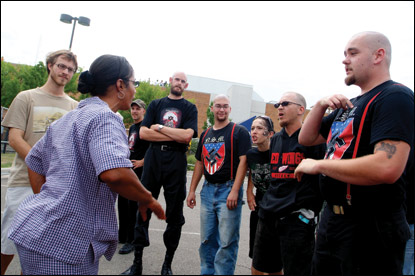 The vicious talk at the white supremacist "Rally Against Black Gang Terrorism" in Kalamazoo, Mich., last Aug. 4 didn't come as much of a surprise to anyone. After all, the speakers included some of the most hard-line racists in America, men who characterized black people from a podium behind a line of riot police as "savage black criminals," "gang hoodlums" and "n------."

And then came James Wickstrom.

Wickstrom is no racial softie. He is a leading exponent of the theology of Christian Identity, which says that black men and women are soulless "mud people," animals created outside the Garden of Eden along with the "beasts of the field." He has spoken of topping fence-posts with the heads of his enemies and worse.

But in Kalamazoo, Wickstrom was positively solicitous. "I know that not all blacks belong to black terrorist gangs," he told the crowd. "I know there are blacks in this community who are very honorable and very truthful, and I guarantee you that I know they are sick and tired of the violence that is happening."

Wickstrom sounded almost like a social worker at times, referring to how "wonderful" it was that black women were working to reduce violence, and adding, in remarks that must have amazed his comrades, "Blacks and whites should work together."

Then he got to the real point.

"It is time," he told the crowd, "for black America and white America to understand that it is the Jew who has pitted us against each other. It is the communist Jew who has disintegrated our society, our educational base, outsourc[ed] our jobs, destroyed our farms, deindustrializ[ed] our nation, so there are no jobs left in America… . You have got to learn who your real enemy is."

It was Jews, Wickstrom added, who brought Africans to America in chains, throwing "two thirds over to the sharks" on the way. And then, he said, there is the brown peril: "Did you know that the 30 million illegal Mexican criminal immigrants have stolen 62% of the jobs of black people? Are you aware of that?"

Wickstrom was not the first white supremacist to reach out to blacks. George Lincoln Rockwell, the late founder of the American Nazi Party, was one of several who unsuccessfully sought allegiances with separatist black nationalists. (Some black nationalist groups, like the Nation of Islam, are strongly anti-Semitic.) But Wickstrom may have been the first to suggest that blacks and whites work together.

Soon enough, though, it was back to business as usual.

Closing out the speeches, rally organizer Hal Turner bellowed about "black criminal hoodlums." "It is very rare in America today," he said, "that a white man will stand in public and talk about lynching blacks, but I did that here today and if you think I'm kidding … I want you to bear in mind that the reason the city put up these fences and called in all these cops was not to protect us from you.

"It was to protect you from us."

And with that, the rally was over. On the police-provided buses back to their cars, the rally participants did not engage in further sweet talk about alliances with African Americans. On the contrary, one organizer gave a pep talk advocating being systematically rude to black people in order to heighten racial tensions.