White nationalists already have their own websites for social networking and video sharing. Now they've built Metapedia, a knockoff of the online, reader-edited encyclopedia Wikipedia that they call "an alternative encyclopedia dedicated to the pro-European cultural struggle." 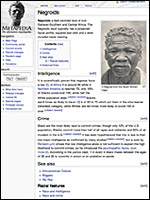 The words may be familiar, but their definitions aren't. Metapedia's entry on "negroids" is little more than an extended exercise in racist slander.

White nationalists already have their own websites for social networking and video sharing. Now they've built Metapedia, a knockoff of the online, reader-edited encyclopedia Wikipedia that they call "an alternative encyclopedia dedicated to the pro-European cultural struggle."

On Metapedia, the subjects sound familiar but their definitions don't. A Native American is "a White Anglo-Saxon Protestant born in the United States of America." David Duke is described as having built the Klan "into an organization to promote the social and cultural interests of white Native Americans."

The entry on "Holocaust Investigation" remains blank. Would-be editors are warned to "make sure that you won't be prosecuted for what you write in your country, before editing this page." (Many European countries outlaw denial of the World War II Holocaust.) Registered in Sweden, the site has more than 1,300 English-language entries and versions in nine European languages. (Wikipedia, by comparison, has more than 2 million English-language entries and smaller counterparts in more than 40 other languages.)

It's apparent that some of the entries could use a little professional editing. Under "Negroids," for instance, the reader finds, "Black race are [sic] the most likely to commit crimes. It has been hypnotized [sic] that this is due to their low mean intelligence as confirmed by many studies." Presumably, the writer meant that this is what has been hypothesized, not hypnotized. It's not known what the mean intelligence of the Aryan geniuses who make such mistakes is.

And so it goes. The one-line entry on homosexuals says they "are protected by special laws in many ZOG countries" —a hyperlink explains that ZOG stands for "Zionist Occupied Government." There are entries on European history, ancient European languages, Scandinavian folklore and Odinism, along with dozens on hate rock bands, concerts and record labels. There's even a little dig at racist skinheads, who apparently have "little in common with the White Nationalists."

The creators of Metapedia says they merely offering "a more balanced and fair image of the pro-European struggle for the general public as well as for academics, who until now have been dependent on strongly biased and hostile 'researchers' like Searchlight, Anti-Defamation League, Southern Poverty Law Center, Simon Wiesenthal Centre, and such."