The old Echo Theater on the courthouse square in Laurens, S.C., is now dubbed the World Famous Redneck Shoppe. It's crammed with racist memorabilia, from cheap Confederate flag flip-flops and bikinis, to T-shirts that announce, "Ain't Racist, Just Never Met a N----- I Liked." The shop's operator, John Howard, boasts that he's been a "member of the Ku Klux Klan for 40-some years."

On Sept. 16, the Redneck Shoppe was packed with avowed racists from across the nation and even Europe -- a "unity" gathering sponsored by Aryan Nations.

As the boisterous convention drew to a close, a black child, maybe 8 years old, rode past the Echo.

Howard, pointing a stubby finger at the kid, loudly sneered: "There's a n----- there I'd like to hang."

Snorts and hoots and hollerin' greeted Howard's invitation to a child lynching. One fellow in tattered overalls slapped his thigh and began an exaggerated pantomime of pulling a rope.

On Friday evening, "Senior Pastor" Jonathan Williams, the leader of Aryan Nations, married an Alabama couple. The bride, Carrie, wore appropriately Aryan tattoos and a beige gown. The groom, Joseph Frieda, sported the powder-blue uniform shirt of Aryan Nations. The ceremony was the conventional "I do" ritual -- conventional if you ignored Williams' bodyguard standing stage right dressed in ebony Klan robes and a towering black hood. 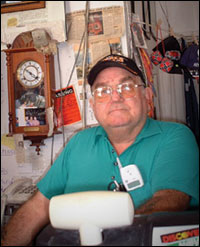 John Howard, owner of the Redneck Shoppe and a Klan member for more than 40 years, reacted typically when he saw a black child on a bike last September. 'There's a n----- I'd like to hang,' he said. (John F. Sugg)

Preparing for War
The true believers in an all-white America arrived Saturday morning. They came from Florida, Washington, Wisconsin, Idaho, Arkansas and most of the states in the Deep South. At least two crossed the Atlantic to attend.

The leadoff speaker was the hulking "Pastor" Paul Brimie, the head of Aryan Nations' prison outreach program. The towering giant, described adoringly by colleagues as a "pit bull of Yahweh," had swapped his muscle- and tattoo-displaying tank top for clerical garb. "Everyone here knows who we hate, who we're against and who is against us," he proclaimed. "We must PREPARE FOR WAR!"

Run out of Idaho after losing $6.3 million in a lawsuit in 2000, Aryan Nations fractured, moved and has been attempting to reassemble itself. Currently, there are two major factions, one based in South Carolina, the other in Alabama.

The smaller remnant, run by the thickly bearded August Kreis III, is based in Lexington, S.C., a suburb of Columbia.

Lincoln, Ala., is home to the larger faction -- the one sponsoring the world congress. That group's leader, Williams, lives in Conyers.

Why two sets of Aryan Nations? A large part of the answer is simple lust for power: Two different sets of racists, each claiming to be heir to the well-known Aryan Nations legacy. And then there is ideology. Both contingents hate Jews. But Kreis' brigade has decided to embrace Arabs -- even promoting Al-Qaeda as doing the Lord's work as long as Muslims are killing Jews. Williams was incensed at such heresy. "I sympathize with Arabs, yes, sympathize because their lands have been stolen by Jews," he said. "But we have nothing for them [Arabs]. The simple fact is that they aren't white."

Williams' contingent has an estimated 200-300 members on its rolls. "We've grown 35% this year," boomed Williams to a cheering audience at the congress. The Aryan Nations Congress attracted about 170 men and women, more than double last year's attendance, according to organizers. 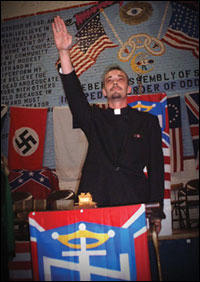 Sieg Heiling 101
During the congress, staccato blasts of whites-fighting-for-whites oratory were interspersed with that staple of all conventions, milling around vendors' tables. Big sellers included "The Apple Story" booklet, which claims Jews are descendants of Lucifer; and CDs, such as the Definite Hate rock band's "Welcome to the South" album, whose cover features an empty noose dangling from a leafless tree.

Many parents brought their children to play amid the swirling white, red, green and black Klan robes, and swastika-emblazoned banners. During a break, two moms, one holding a babe, the other corralling a toddler in camouflage jammies, could be overheard chatting about things that worry all mothers. "At that age," said one, "you've always got to keep an eye on them."

But normalcy ended there. One of the moms, in a turquoise blouse, is married to a Georgia Klansman and had a large KKK cross-and-drop-of-blood medallion around her neck. The other woman, wearing tight jeans and heavy blood-red lipstick, sported a T-shirt emblazoned with "88" -- code for "Heil Hitler."

A dozen or so groups -- ranging from the venerable Klan's multitude of splinters, to upstart outfits such as Arkansas-based White Revolution, to Nazis of various stripes -- sent delegates to what Aryan Nations leaders described as a "unity conference" of white supremacy.

There was even a German Nazi in attendance, Peter Josef Boche, who runs a racist church in Berlin. At one point, Boche was surrounded by a group of women and girls. The stubble-faced German, accompanied by his properly blonde daughter, was leading a practice session in how to rakishly throw up the right arm in a stiff-armed "Heil Hitler!" salute.

'Blood in the Streets'
Josh Fowler, nattily robed in green, swaggered onto the Echo's stage flanked by two bodyguards, one bearing a round shield adorned with the Klan cross. The youthful grand dragon of one of South Carolina's Klan outfits brought the audience to its feet in cheers by announcing that what he "really hates is white women with little mongrel babies."

Fowler was followed to the podium by Virgil Griffin, a legendary Carolina Klan relic who participated in a 1979 Greensboro, N.C., confrontation that ended with the slaying of five left-wing union organizers. No one was ever convicted for the crime, yet an Aryan Nations officer named Ryan Brennan told the assemblage that Griffin "is my hero. Five commies went to hell that day."

With fists slugging the air, Griffin urged the crowd to "get every weapon you can get. We're gonna hit back." His most vitriolic comments were reserved for Hispanics. "They breed like rats, worse than n------, and send their money back to Mexico," Griffin roared. "Only thing I got for them is a bullet right between the eyes. Ship their dead butts back to Mexico."

Rick Spring is the dapper Aryan, one of the few remaining confidants of the late Aryan Nations founder, Richard Butler. Clad in black jacket and pants, the only signal of what Spring is about is his elegantly embroidered red, gold and powder-blue Aryan Nations armband.

He has a knack for explaining things. For example, about those swastikas on fluttering flags and tattooed on his colleagues' arms and heads, Spring opined, "They're just good luck signs. Some people say they're Nazi symbols, but that's not what I see."

And on violence? "Aryan Nations is the whipping boy," he said. "The only time we're violent is when violence is brought to us."

The scariest of the Aryan Nations speakers was Ryan Brennan, who lives in South Carolina. He capped his speech with a dance across the stage, a la Mick Jagger, and a bellowed challenge: "You want to see blood in the streets? I DO!"