Several members of the extended Phelps family, which makes up most of the notorious anti-gay hate group Westboro Baptist Church, are ensconced within the Kansas State Department of Corrections (DOC), a prison advocacy group reported in December. 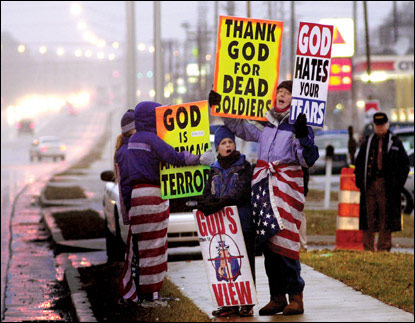 Margie Phelps, who recently celebrated the deaths of American soldiers in Iraq with her nephew, is the Kansas Department of Corrections' director of re-entry planning. State Sen. Jean Schodorf said it was "an embarrassment" that several members of the rabidly anti-gay Phelps clan were in key positions in the DOC.

Several members of the extended Phelps family, which makes up most of the notorious anti-gay hate group Westboro Baptist Church, are ensconced within the Kansas State Department of Corrections (DOC), a prison advocacy group reported in December.

According to Seattle-based Prison Legal News, members of the Phelps clan who adhere to patriarch Fred Phelps' viciously anti-gay worldview while in the employ of the state of Kansas include offspring Margie Phelps, the DOC's director of re-entry planning; Fred Phelps Jr., a staff attorney with the DOC; and Timothy Phelps, a spokesman for the Shawnee County DOC. (Margie Phelps was even awarded "Kansas Correctional Association Employee of the Quarter" in late 2005 — this despite her arrest at a 2004 protest at a dedication ceremony for the Brown v. Board of Education Historical Site in Topeka, Kansas.)

Although many officials quoted in the report, written by Alex Friedmann, say they are undisturbed by the presence of such radicals in government employ, Republican state Sen. Jean Schodorf described their presence on the state payroll as "an embarrassment." She complained that members of the Phelps clan "flaunt that they work for the state and can't be terminated" due to laws protecting civil service workers.

In February, Prison Legal News, which monitors human rights abuses within America's prison system, filed an ethics complaint with Kansas legal officials against Shirley Phelps-Roper, an attorney with her family's law firm. The complaint alleged that Phelps violated legal ethical canons because of the extreme vitriol she directed toward LGBT people on a radio show. The state Office of the Disciplinary Administrator declined to pursue it, citing the First Amendment.

Fred Phelps' Topeka-based hate group has around 80 members who routinely travel the country preaching "the Bible's hatred," advocating the death penalty for gay men and lesbians, and picketing the funerals of people who die from AIDS. Recently, the group has concentrated on the funerals of soldiers felled in Iraq, "thanking God" for the deaths it attributes to America's "f---enabling" ways. These pickets have led to state and federal legislation aimed at restraining the 77-year-old Fred Phelps Sr., who has 14 children, most of whom remain loyal to their father.