New Saxon, the latest white supremacist social networking site, is back up after the arrest of its founder. It hasn't been easy

Online, though, Ready is better known to the nearly 2,000 registered users of New Saxon, a newly popular white-supremacist social networking website, as "Viking Son." His self-created New Saxon profile displays photographs of Ready wearing a kilt, donning a bulletproof vest, and scouring the desert for "illegals" through a pair of binoculars. Ready lists his "turn-ons" as "a woman who loves our Race, Kultur, Heritage, History and Future," identifies the racist fantasy novel The Turner Diaries as his favorite book, and describes himself as a big fan of neo-Nazi teen pop duo Prussian Blue.

Ready's "Viking Son" profile is typical fare on New Saxon. The racist MySpace knock-off has rapidly gained popularity in white supremacist circles since its inception last year, even as the fledgling online community has weathered power struggles and accusations of embezzlement and treachery. 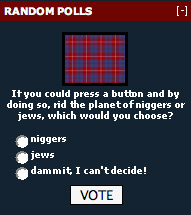 In 2005, Dylan Wheeler, the webmaster for the Portland, Ore.-based racist skinhead group Volksfront, created Folkcom.com, short for Folk Community. Folkcom quickly gained around 2,000 members, but was shut down in late 2005 amidst allegations that administrators monitored private messages between members.

Folkcom's fleeting success made clear the demand for a white supremacist social networking website, and in May 2006 New Saxon was registered as a website by 42-year-old Todd Findley, a longtime Florida-based white supremacist and alleged con artist.

"NewSaxon.com realizes the need of white folk to have a place on the net to call our own so we set up an online community," the site informed potential members. Findley offered "the ability to stay connected with family, old friends and meet new people through our online discussion forums, real-time chat rooms, groups, and classifieds section."

Slickly packaged with many of the same user-friendly features as MySpace — and none of the content restrictions — New Saxon attracts neo-Nazis and other white supremacists from the United States, Australia, Canada, and several European countries.

One registered user, "Deviltrigger," identifies himself as a 21-year-old white male and writes, "I fight for my race and don't stand down to some f---iin [sic] jungle bunnies and jews." Another user, "SilverStateSkins" lists his "turn-offs" as "N------, S----, G----, K----, Interracial Relationships, Fakes, Backstabbers, SHARPs" (that last refers to the anti-racist Skinheads Against Racial Prejudice). A profile posted by "SiegOderTod" features a photo of a housecat wearing a tiny red swastika armband and raising one paw in a sieg heil salute. 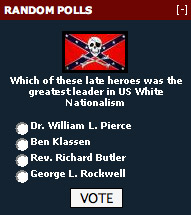 This April, Findley was arrested in Florida and charged with three counts of grand theft and one count of scheming to defraud. The charges stemmed from Findley's solicitation of funds for what he called the European American Heritage Foundation, which purported to offer white nationalists the opportunity to construct an "all-white" residential community in Florida, starting with $2,500 down payments. At least 11 families signed contracts with Findley, who was indicted for bilking these investors out of $27,500.

Shortly after he was arrested, Findley, apparently desperate for cash, put New Saxon up for sale. The National Socialist Movement, a neo-Nazi organization, quickly snatched it up for the reported bargain-basement price of $5,000.

NSM leaders then placed New Saxon under the care of NSM webmaster Eric Adams. The former imperial wizard of the Southern White Knights of the Ku Klux Klan, Adams also oversaw other NSM-controlled sites such as nukeisrael.com.

Adams' tenure running New Saxon proved to be short-lived. On May 30, he blocked access to the site and posted this cryptic message: "Unless the HQ contacts me, He knows who he is, and if he wishes to continue he will contact me to regain access to New Saxon."

According to allegations subsequently posted online by NSM leaders, Adams hijacked New Saxon after the NSM leaders discovered he was allegedly embezzling funds from credit card and PayPal accounts used by NSM members and supporters, including customers of NSM88 Records, the neo-Nazi group's hate-rock music company.

"Unfortunately we can not blame this problem on the jews, I wish it were so, our natural enemies are usually the culprits, but not this time," wrote NSM Commander Jeff Schoep. "The truth of the matter is, an ex-NSM member, who was part of our webteam, was caught in some very dishonorable dealings."

Somehow, NSM wrested control of New Saxon back from Adams and by mid-June the site was functioning normally again, with new features such as a "White Power Trivia Quiz." (One of its 10 questions reads, "Hitler's famous book was?" The multiple-choice answers are: Of Mice and Men, Mein Kampf, Grapes of Wrath and Die Jew Die.)

New Saxon also contains an extensive photo gallery of white supremacist tattoos, sieg-heiling children and skinheads posing in front of swastika flags. There's a music section where Johnny Rebel's "N----- Hating Me" is the most requested song, and weekly user polls posing questions such as: "Someone says 'Adolf Hitler was a jew.' You do what?" The options include: "Show them a Doc Marten dental plan" (a reference to the brand of boots skinheads often use to kick enemies' faces) and, "Say 'F--- Off' and flip the finger."

The New Saxon online community is subdivided into social groups devoted to various interests. For example, members of the "Noble Maidens & Mummy" group discuss parenting tips and arts and crafts to instill in their children "a moral code that will bring forth the new dawn for white pride."

With a founder indicted on grand theft charges and his successor ousted for alleged embezzlement, New Saxon's claim to the moral high ground seems as dubious as its long-term prospects. For now, though, it's the new hot spot in the virtual village of online hate.