The crime was horrific by any measure. On the night of Jan. 6, Knoxville, Tenn., couple Christopher Newsom, 23, and Channon Christian, 21, drove to a friend's house to watch a movie after a dinner date. When they reached the friend's apartment complex, they were carjacked at gunpoint by three men and a woman who forced them to drive to an abandoned house where the assailants raped and murdered the young couple.

The next day, police discovered Newsom's body shot and burned along city train tracks. Three days after that, officers discovered the body of Christian in an unoccupied house. She had been strangled and crammed into a garbage can.

Knoxville-area television stations and newspapers have covered the story heavily since the bodies were found. On the national media level, The Associated Press and MSNBC reported on the murders shortly after they occurred. But starting in April, a loud and growing throng of white supremacists began protesting what they call a conspiratorial media blackout, owing, they claim, to the fact that Newsom and Christian were white and their alleged killers black. 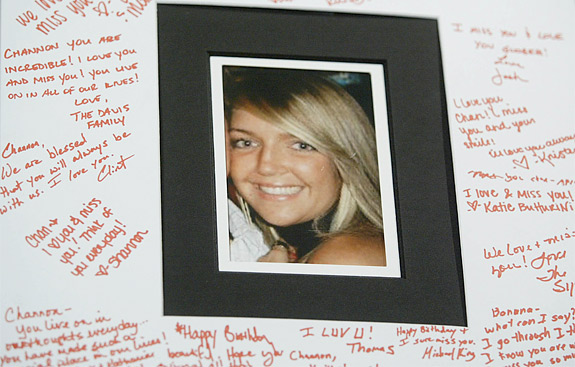 Murder victim Channon Christian was the focus of a rally by white supremacists in Knoxville, Tenn.

"We as White Nationalists cannot allow the Jewish media bosses to simply slip this story down the media hole," read one April 27 post on the racist online forum Stormfront. "Individuals of the White Race are being sacrificed on the altar of Political Correctness," added "Pastor Eli James" on another racist website.

Attempting to capitalize on the propaganda value of a gruesome crime, white supremacists have flooded the Internet and radio waves with false details concerning the purported sexual mutilation of the victims and held a rally in Knoxville to protest "black crime." Their lies — that the murders were a race-based attack and that the victims were horribly mutilated —are gaining traction. Without acknowledging the source, some mainstream conservative commentators in recent months have been parroting the key white supremacist talking point, characterizing the Christian-Newsom murders as a black-on-white "hate crime."

This is hardly the first time that white supremacists have attempted to twist a horrible crime story into proof that the "politically correct" media intentionally downplays or suppresses news of black-on-white hate crimes. In 2000, two black brothers in Wichita, Kan., attacked and sexually abused five white men and women, killing four of them. American Renaissance, a white supremacist journal, published a lurid account of the crime — "The Wichita Massacre" — that concluded that the lack of national press coverage reflected "a refusal to think about race," despite authorities' insistence that race played no part in the attack. It wasn't long before David Horowitz's FrontPage online magazine, ostensibly a mainstream conservative publication, republished the American Renaissance screed. Other cases, including the murder this June of a pregnant white woman in Ohio, allegedly by her black police officer boyfriend, were similarly played up by the racist right. 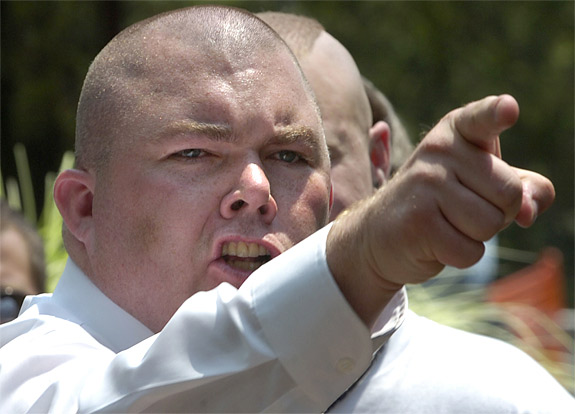 White supremacists like Randy Gray rallied in Knoxville, Tenn., over the murder of Channon Christian.

Neo-Nazis Against 'Genocide'
Led by neo-Nazi webmaster Alex Linder, a group of about 30 neo-Nazis gathered in Knoxville May 26 for a "Rally Against Genocide" organized in the names of Christian and Newsom. At least one of the demonstrators wore a swastika T-shirt. They held signs reading "Diversity = White Death" and "Murdered By M---, Covered Up By Jews." A group of counter-protesters, the Coup Cluts Clowns, showed up in white makeup and wedding dresses to shout down the racists. Police arrested Linder, head of the Vanguard News Network, for breaching protest boundaries and tussling with police officers. He was charged with disorderly conduct, resisting arrest, vandalism and assault on a police officer.

The parents of the victims wanted nothing to do with the rally and expressed anger at the out-of-town protesters for using the case to stoke racial tensions. "I think any kind of crime like that's a hate crime," said Gary Christian, Channon's father. But he added: "Was it racial? No, I don't think so."

Knoxville authorities have repeatedly stated that the murders were not racially motivated. "We have no evidence to support the notion that this was a race-based crime. We see this as a cold-blooded murder," Sterling Owen, Knoxville police chief, told reporters.

"There is absolutely no proof of a hate crime," added John Gill, special counsel to Knox County District Attorney Randy Nichols. "It was a terrible crime, a horrendous crime, but race was not a motive. We know from our investigation that the people charged in this case were friends with white people, socialized with white people, dated white people. So not only is there no evidence of any racial animus, there's evidence to the contrary."

Hal Turner, a racist Internet talk radio host who has relentlessly hyped the case on his weekly show and also attended the rally, seemed to blame the victims' parents, at least partly, for the murders. "If these families had educated their children to be more race conscious, maybe they'd still be alive," he told reporters at the rally.

"The goal of this rally is twofold," said Turner. "We want to tell the liberal media we are tired of them spiking stories about black-on-white crime. Our second goal is to tell the black community they have to restrain their black hoodlums." 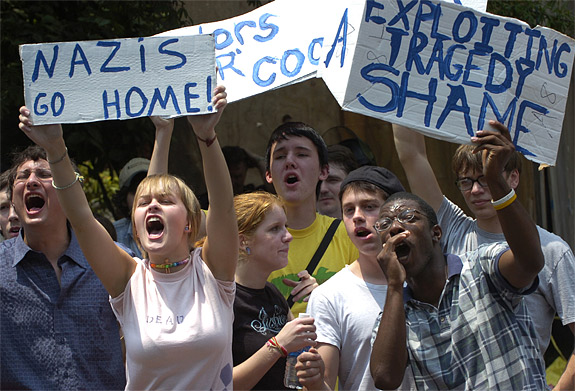 Demonstrators protested the neo-Nazi's exploitation of the case.

Polluting the Mainstream
Roughly three months before the Rally Against Genocide, white supremacists began circulating rumors online and on radio shows like Turner's that Christian and Newsom were sexually mutilated — specifically, that Channon's breasts were cut off and that Newsom was castrated.

Those details are false, according to Knoxville law enforcement authorities. "The police and district attorney's office have assured me that there was no parts missing from either body," added Hugh Newsom, Christopher's father. "They have distorted that." (Newsom does, however, believe that race may have played a role. "Would they have done that to a black couple? I don't think so," he said.)

The tall tales of sexual mutilation first entered the mainstream in early May, when country music star Charlie Daniels posted an open letter on his website calling for increased media coverage of the murders and claiming that Newsom was castrated and Channon's "breasts were cut off while she was still alive." The Charlie Daniels letter was quickly republished on Stormfront and the website of the Council of the Conservative Citizens hate group, as well as several right-wing blogs.

Later in May, just a few days before the Knoxville rally, conservative commentator, syndicated columnist and blogger Michelle Malkin was the guest host of "The O'Reilly Factor" on Fox News. Her topic? The Christian-Newsom murders, which Malkin suggested were a hate crime. "An attractive white couple murdered by five black thugs doesn't match any known political narratives," Malkin said. Furthermore, Malkin said, "There are unconfirmed reports that they [Christian and Newsom] were sexually mutilated." Malkin also aired the claim that Christian's body "was found in five separate garbage bags" — another utterly false detail. (In 2002, Malkin had also taken up the "Wichita Massacre" case and publicized it.)

Even white nationalist Nicholas Stix, who just days earlier had published a lengthy account of the murders in American Renaissance, criticized Malkin for spreading falsehoods, writing online that he didn't include the claims of dismemberment in his article "because I could not find a reliable report of it. … Call me intolerant, call me crazy, but I do not find posts at neo-Nazi message boards to be credible news sources."

'On What Planet?'
In early June, The Miami Herald published a nationally syndicated column by Leonard Pitts in which Pitts, an African American, criticized white supremacists and right-wing commentators for dragging the murders into the national spotlight. "Black crime against whites is underreported? On what planet? Study after study and expert after expert tell a completely different story," Pitts wrote.

Neo-Nazi webmaster Bill White, leader of the American National Socialist Workers Party, responded by calling Pitts a "n-----" and publishing the columnist's home address and phone number on White's personal website, Overthrow.com. Pitts received death threats. When the Herald's managing editor asked White to take down the data on Pitts, White replied by E-mail: "We have no intention of removing Mr. Pitts' personal information. Frankly, if some loony took the info and killed him, I wouldn't shed a tear. That also goes for your whole newsroom."

All four of the alleged killers in the Knoxville murders were swiftly arrested and are scheduled to stand trial in May 2008. Prosecutors have indicated they will seek the death penalty. The fact that justice is being served will likely do nothing to prevent white supremacists from continuing to further their cause by exploiting the tragedy, much to the dismay of the victims' families.

As Gary Christian said to those who are twisting his daughter's death to fit their own ends: "It ain't about you."