Anti-gay activists who picketed a funeral have lost a huge judgment for inflicting emotional distress. It's unclear if the verdict will hold since Phelps' offensive speech is aimed at private, not public, persons.

In October, a federal jury in Baltimore awarded $11 million to the father of Lance Cpl. Matthew Snyder, a Marine killed in Iraq, against the notorious Fred Phelps and his Kansas-based Westboro Baptist Church for their offensive protest at Snyder's funeral. Phelps and his church, which consists mainly of his family, are infamous for picketing at the funerals of American soldiers killed in Iraq and Afghanistan with signs saying "God Hates F---," "Thank God for 9/11," and "Thank God for Dead Soldiers." Church members claim to believe that God is punishing America for its tolerance of homosexuality and permissive morals.

The Snyder protest took place across from the Catholic church where the funeral was being held, and signs included the words "Semper Fi F---" and two stick figures that appeared to be engaged in sodomy. The church also posted derogatory statements about Snyder and his father on its website, www.godhatesf---.com. The jury found Phelps, the other six picketers, and the church liable for violating the Snyder family's privacy and for intentionally inflicting emotional distress. (A Legal Brief in Intelligence Report No. 122 discussed the constitutionality of laws banning picketing outside of funerals.) 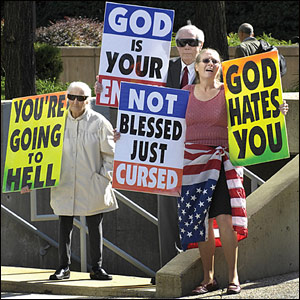 The Phelps verdict has set off a constitutional debate over how far the First Amendment should extend to protect the most extreme forms of expression from civil lawsuits for damages. One of the laws under which the verdict was entered, the tort of "intentional infliction of emotional distress," allows a plaintiff to recover money from a defendant who intentionally engages in outrageous speech or conduct that causes severe emotional distress to the plaintiff. Most government restrictions on speech have to be "content neutral" in order to be constitutional — that is, the restrictions can't be based on the actual content of the speech. But in a civil lawsuit based on the tort of "intentional infliction of emotional distress," it is precisely the content of the speech or conduct that is the basis for the lawsuit.

The problem posed by those who disagree with the verdict in Snyder v. Phelps is what they call the "slippery slope" that could lead to a weakening of the First Amendment. Critics say that if the tort of intentional infliction of emotional distress applied to all outrageous speech about public matters (such as homosexuality and the alleged moral decay of America) that is aimed at private people (such as the Snyder family), then much speech about public concerns could be effectively stripped of its constitutional protection. A state university, for example, could ban the student posting or publication of cartoons mocking Mohammed on the grounds that they are so "outrageous" that they inflict "severe emotional distress" on Muslim students.

In the pivotal case of Hustler v. Falwell, the Supreme Court held that the tort of intentional infliction of emotional distress could not be used to sue over speech on matters of public concern about public figures. In that case, the well-known Christian fundamentalist minister Jerry Falwell sued the notorious porn magazine, Hustler, over its publication of a parody which, among other things, portrayed Falwell as having engaged in a drunken, incestuous rendezvous with his mother in an outhouse. In striking down a verdict in favor of Falwell that was based on the same tort at issue in the Phelps case, the Supreme Court noted that "[o]utrageousness in the area of political and social discourse has an inherent subjectiveness about it which would allow a jury to impose liability on the basis of the jurors' tastes or views, or perhaps on the basis of their dislike of a particular expression," which is inconsistent with the First Amendment.

The big difference between Falwell v. Hustler and the Phelps case is that Jerry Falwell was a "public figure," while the Snyder family is not. In libel cases, speech aimed at private figures (like the Snyders) receive less First Amendment protection than speech aimed at public figures (like Jerry Falwell). This is because private individuals cannot easily rebut defamatory statements and because they have not voluntarily put themselves in the public eye, and thus do not willingly assume the risk of defamation. Intentional infliction of emotional distress is not the same as libel, however, and it's not clear whether the Supreme Court would give Phelps and his protesters the same First Amendment protection as it gave Hustler magazine, given that Phelps' offensive speech is aimed at private, not public, persons.

As could be expected, Phelps and his co-defendants have promised to appeal the jury's verdict to U.S. Court of Appeals for the Fourth Circuit.