The December murder of a 14-year-old African-American girl, the latest apparent victim of Latino gang members' campaign to "ethnically cleanse" many neighborhoods in Los Angeles, has set off a political earthquake. 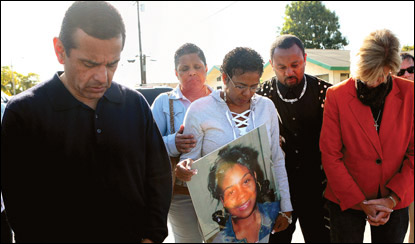 The December murder of a 14-year-old African-American girl, the latest apparent victim of Latino gang members' campaign to "ethnically cleanse" many neighborhoods in Los Angeles, has set off a political earthquake, prompting top city officials to acknowledge for the first time a frightening rise in racial killings by Southern California street gangs.

Cheryl Green, playing on her skateboard with a group of friends just south of 206th Street, was shot dead on Dec. 15 by two men who approached the group and began firing without uttering a word. Three others were wounded. Two members of the Latino 204th Street gang were later arrested in the killing.

The slaying prompted Mayor Antonio Villaraigosa and Police Chief William Bratton to hold a press conference on Jan. 18 to launch a major campaign against 10 street gangs, six of them Latino. "The 204th Street and Eastside Torrance gangs have contributed to the rise in racially motivated murders and other crimes," the mayor's office said in a press release. "204th Street has a long and violent history. This is especially true regarding crimes committed against African Americans."

Green's murder came just days after the Winter 2006 issue of the Intelligence Report went to press. That issue's cover story, "L.A. Blackout," detailed how the powerful Mexican Mafia, a prison-based gang, had given the "green light" to the many Latino gangs it controls in Southern California to terrorize and murder black people as part of a campaign to drive blacks from Latino neighborhoods.

Cheryl Green's murder was not the only such development.

On Dec. 28, a white man was stabbed 80 times, his throat slashed and his body dumped in the street. Police said Christopher Ash was killed by gang members because he witnessed Green's murder. Five men, including one of the two eventually arrested in Green's murder, were arrested and charged with capital murder.

While the vast majority of violence is intra-racial for both black and Latino gangs, interracial gang violence is on the rise. The Los Angeles Times reported an 11% increase in such crimes in L.A. County from 2002-2006, with Latino-on-black attacks rising from 247 to 269 and black-on-Latino attacks going from 213 to 240. A rise in similar violence was also reported in the nearby San Fernando Valley.

Najee Ali, a black community activist, said that Green's murder had nearly set off a racial gang war — a war he and Green's mother helped avert when they calmed enraged black gang members. He also disagreed with the contention by some Latino activists that "ethnic cleansing" was an unfair description of the crimes.

"Remember, even in Bosnia and even in Nazi Germany, it all started with just a handful of people being killed because of ethnicity. Then it mushroomed," Ali told the Intelligence Report. "If there is an orchestrated plan to push blacks out of neighborhoods, then we have to call it what it is."