In the latest disaster to hit the American radical right, Kevin Alfred Strom, the founder of National Vanguard and a major neo-Nazi leader for nearly 20 years, has been arrested and charged with child pornography and witness tampering.

In the latest disaster to hit the American radical right, Kevin Alfred Strom, the founder of National Vanguard and a major neo-Nazi leader for nearly 20 years, has been arrested and charged with child pornography and witness tampering.

Federal agents arrested Strom near his home in Stanardsville, Va., on Jan. 4, after he was indicted for allegedly having pornographic images of children on his computer between Oct. 17, 2005, and last Aug. 4. He was also charged with witness tampering because he allegedly "physically assaulted and mentally intimidated" an unnamed witness against him. A judge ordered him held without bond.

If convicted, Strom, 50, would face up to 30 years in prison. Strom was for almost two decades a deputy to William Pierce, who founded the neo-Nazi National Alliance and wrote The Turner Diaries, a book that served as the blueprint for the 1995 Oklahoma City bombing. He started a radio show for Pierce and became known as the group's second "intellectual," after Pierce, as well as editor of its book division and magazine. When Pierce died unexpectedly in 2002, Strom, passed over to succeed his mentor, remained with the Alliance for a time, but finally broke away to form National Vanguard after a 2005 internal dispute.

Then, last July 18, Strom announced he was taking a leave of absence from National Vanguard, citing "health and family matters." In a statement, he said he had "made mistakes, sometime serious ones," but gave no further hint of trouble. 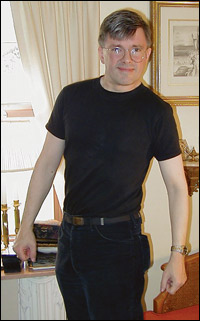 Strom's arrest set off a firestorm on the radical right, which has seen a number of its key activists arrested recently for embarrassing crimes, some of them sexual in nature. "If Kevin's genuinely guilty," one extremist wrote on the racist Stormfront web forum shortly after the arrest, "then the credibility of his work — indeed the credibility of all intelligent White nationalist work — will be severely crippled, and we shall be reduced to apologetics for years to come."

'Feminine Beauty'
Kevin Strom's interest in young girls was well known. While living at the National Alliance's West Virginia compound in the mid-1990s and, later, living with his then-wife Kirsten Kaiser in Minnesota, he hosted a website with a major section devoted to "feminine beauty." As a practical matter, that meant Strom posted scores of photos of attractive, very young white girls, often in bikinis. He was particularly given to a teenage Brooke Shields, who he ran several shots of astride a horse.

"The beauty of the women and girls of our race has inspired our greatest poets, artists, and writers throughout our history," Strom wrote on his site at the time. "[I]f anything is sacred, our girls and women are, and they must be protected from the degradation and degeneracy that is inherent in multiculturalism."

Kaiser, now 44, remembers her ex-husband's postings well. "The website had some National Socialist stuff, but it also had all these pictures of girls who were about 12," she told the Intelligence Report immediately after learning of the arrest of Strom, whom she divorced in 1999 after having three children by him. "He used to talk about [the 18th century composer Antonio] Vivaldi, too, saying the reason he was able to write such wonderful music was that he worked at an all-girls school [an orphanage in Venice]. Kevin also used to say that the only sport he was interested in was nymphet baseball, whatever that means. And he had these paintings all over the house of water nymphs. He really liked that stuff."

Kaiser, who rejected Strom's neo-Nazi ideology and wrote the 2003 book Bondage of Self about her experiences with him, said she was interviewed by the FBI last November. She was asked, she said, for the names of young girls who lived on the Alliance's West Virginia compound — daughters of several of Pierce's wives and others who Kaiser said Strom was fond of regularly photographing. She also told agents Strom often asked her to wear pigtails to make her look younger.

Kaiser said she was contacted the same month by Elisha Strom, the outspoken neo-Nazi activist who Kevin married after losing custody of his children to Kaiser and returning from Minnesota to live on the Alliance compound in 2000.

For her part, Elisha Strom spoke out on Vanguard News Network, a neo-Nazi web forum, saying she had not turned Strom in to authorities, had not divorced him, and had, in fact, "tried to get him help." Then she posted a remarkable document.

The paper, an apparently notarized "contract" between Elisha and Kevin that is dated Sept. 8, 2006, and signed by both, says that "pursuant to concerns relating to pedophilia," Strom promises to see a "qualified counselor" twice a month. Strom also allegedly agrees that until he "has been declared free of pedophilia," Elisha has the right to inform any future wife of Strom's of his sexual proclivities.

One other woman spoke up, too. April Gaede, a long-time National Alliance activist who quit that group to help Strom form National Vanguard, told the VNN web forum that Strom had called her in March 2006, four months before he took his mysterious leave of absence. Strom "told me that [Elisha] had found some porn on his computer and that it was of adult females but that she freaked out and called him a pervert," Gaede wrote. "Then he told me that she had threatened to 'get even' with him and that he was afraid that she would plant something on his computer."

Unmentioned by Gaede was the role Strom has played recently as promoter at concert after concert of Prussian Blue — the folk-singing, neo-Nazi duet comprised of Gaede's two daughters, pretty blonde twins who recently turned 15.

Political Fallout
Kevin Strom was never an especially popular figure on the radical right — his allegedly feminine voice and mannerisms had earned him the nickname of "Weenie" among his detractors — but he was important nonetheless. In a world dominated by thuggish skinheads and violent rhetoric, Strom was able to project the image of a well-read intellectual, a thoughtful man concerned for the plight of his race.

Strom's group, National Vanguard, posted a statement after his arrest lauding their recent leader as "a fearless, outspoken activist and speaker against Jewish supremacist power" and insisting the charges were "totally without foundation." But the National Alliance sought to distance itself even further from Strom, broadcasting the fact that it had expelled him in April 2005 for "gross dereliction of duty."

It's unclear how National Vanguard, which started out strong but has lost both members and prestige in recent months, will fare in the aftermath of Strom's arrest. But one 2003 E-mail, discussing even then Strom's apparent taste for young girls, suggests the despair that such episodes engender.

"Why can't we have so much as one single leader who is just simply NORMAL? Why must there always be these weird little kibbles and bits, these little oddities, these little bits of quirky behavior lurking in the background of everything we do?" the E-mail from "Peter Dromgoole" to Bill White's website asks plaintively. "Why do we even bother? Is this really, truly, THE BEST WE CAN DO?"