KENNESAW, Ga. —With his long, scruffy beard, chunky silver rings and bandanna headband, the owner and proprietor of Wildman's Civil War Surplus and Herb Shop looks from a distance like a typical aging hippie. 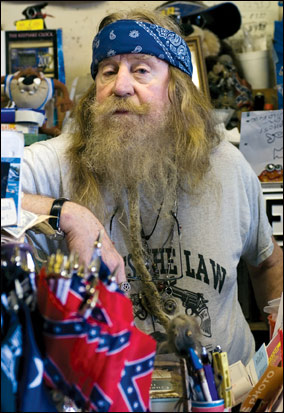 Dent "Wildman" Myers' store may be filthy and crammed with racist memorabilia, but the town of Kennesaw, Ga., seems to have embraced him wholeheartedly.

KENNESAW, Ga. —With his long, scruffy beard, chunky silver rings and bandanna headband, the owner and proprietor of Wildman's Civil War Surplus and Herb Shop looks from a distance like a typical aging hippie.

But if the twin .45s strapped to Dent Myers' belt aren't indication enough that he's no New Age apothecary, a stroll through Wildman's store offers other clues.

To get to the packets of more than 200 herbal remedies the 76-year-old says he prepares himself, you have to walk by a dingy display case full of KKK daggers and Civil War bullets and past the rack of white-power novels and Johnny Rebel CDs, featuring classics such as "N----- Hatin' Me," "N----- N-----, Who Likes a N-----," "Move them N------ North" and "Some N------ Never Die, They Just Smell That Way." Crossing into a chained-off museum area of the store, posted "No Dogs, No Negroes, No Mexicans" (although the sign has been amended to read "Dogs OK"), you walk down a narrow dusty corridor lined with Confederate soldier uniforms, Satan-shaped candles and T-shirts from the racist band Skrewdriver until you reach a mannequin dressed in moldering Klan robes and holding a noose.

The Klansman stands right in front of the herb rack.

With Yosemite Sam's swagger and Foghorn Leghorn's smooth Southern drawl, "Wildman" Myers describes his inventory as "a potpourri of the history of anything from white-power books to War Between the States memorabilia, a treasure trove piled floor to ceiling with dust and intermittent relics." He's not kidding about the dust. A layer of filth coats his entire inventory, floorboards are uneven, and he asks visitors to kindly refrain from leaning on a support post in the back room, lest the roof cave in.

Myers' dubious treasures include a small box of "niglet repellant" — cotton balls, he explains. "It's supposed to be a joke," Myers says. "Somebody told me they won't pick cotton because they've gone upper-class now." There are stacks of Confederate battlefield maps, a Ralph Lauren perfume bottle, a scrap of steel wool, what looks like a desiccated ear, and piles of newspaper clippings featuring Myers, who has become a kind of unofficial spokesman for the town, a cantankerous former Confederate stronghold. Since 1982, when Kennesaw passed an ordinance requiring all citizens to own a gun and ammunition (exceptions were later added) in a hot-blooded response to Morton Grove, Ill.'s passage of a handgun ban, Myers has posed with his guns for countless outsiders and journalists.

And the town seems to have wholeheartedly embraced him, despite the racist and Confederate flags that have plastered his two-story storefront since he opened for business in 1971. In 1993, the Kennesaw Historical Society awarded him its first Historic Preservation Award, a fact noted on the society's website (although there's nothing there about his racism). In 2002, Myers appeared as Clara's uncle in a performance of "The Nutcracker, Kennesaw Style." In Kennesaw, Ga., Dent Myers is a celebrity.

"I've had visitors from every country in the world," boasts Myers, who claims to have shared a psychic with Doris Day and says he is the reincarnation of Confederate Gen. Thomas "Stonewall" Jackson. "I had King Hassan [of Morocco] here about three or four years ago… . Johnny Cash shot a movie here. Kenny Rogers shot a movie here."

Myers also has a photo of himself with Randy Weaver — the white supremacist whose wife and son were shot in a 1992 confrontation with federal agents. It's tacked up on his wall just to the right of a large collage of snapshots of unfortunate African Americans who have wandered into his store over the years and found themselves ambushed by Myers' camera.

Myers won't admit to membership in the Klan, or any organized group — "I'm not much of a joiner," he explains slyly — but he's clearly not bothered by the idea.

"I've been called a racist, redneck, honky bigot — that's my full name," Myers told the Intelligence Report. "I just let it slop off me like a proverbial duck, 'cept my feathers don't get ruffled."