To most people who know him, Robert A. Pastor is a distinguished professor of international relations at American University, a long-time foreign policy adviser to Democratic presidents and candidates, the author or editor of 16 books, and the director of the Center for North American Studies. But to a rapidly growing number of people on the extreme right, this lifelong scholar is a "globalization pimp," one of the "traitors" trying to "effectively destroy the United States of America," a man, in the angry summation of far-right attack dog Jerome Corsi, who is the "father of the North American Union." What has Pastor done to deserve the opprobrium? He wrote a 2001 book on building a North American community, co-chaired a 2005 tri-national task force that produced a similar document, and had some of his ideas incorporated into the "Security and Prosperity Partnership" (SPP) announced by the U.S., Canada and Mexico on March 23, 2005. Although he has never come close to proposing that the three countries merge, that is the accusation now being touted by the radical right — and touted so effectively that the houses of representatives of at least 18 states have passed resolutions denouncing the SPP and what they characterize as a planned "North American Union." 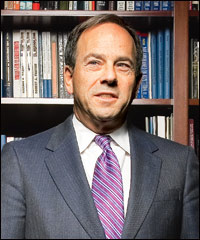 In fact, Pastor has never advocated more than a "community" of the three countries — essentially, a closer relationship among the three governments — and the SPP has produced little of substance. The Intelligence Report interviewed Pastor about his ideas and their misinterpretation.

INTELLIGENCE REPORT You seem to have been singled out as the evil genius behind the so-called North American Union. What has that been like?
ROBERT PASTOR I'm complimented that I'm considered the architect of a new relationship with our two neighbors. I wish it were not my enemies who were giving me all the credit! I get an average of 20 E-mails a week, with sometimes an avalanche after an article is written about me or after [CNN anchor] Lou Dobbs or [MSNBC commentator] Pat Buchanan or [Fox News Channel host] Bill O'Reilly go after me. The E-mails are sometimes quite vicious, accusing me of treason and worse. Sometimes, they approach being death threats. One I'm looking at right now says, "All we see is more and more damned illegal Mexicans being welcomed with open arms… . Robert Pastor … isn't a politician, but he sure has his hands in destroying America."

INTELLIGENCE REPORT How has the far-right press treated you?
PASTOR Well, most of the attacks are premised on a series of charges about what I have allegedly proposed, virtually all of which happen to be false. The people who feel most intensely and have been writing me tend to be people who disregard any information that runs contrary to their view that I am an evil architect whose intent is to erase our borders and create a North American Union. When I deny that this is my proposal, that doesn't stop them from proceeding as if I had said nothing at all.

INTELLIGENCE REPORT What are you, in fact, proposing?
PASTOR Lou Dobbs, Patrick Buchanan, Jerry Corsi [Jerome Corsi, co-author of one book attacking 2004 presidential candidate John Kerry and also of a recent nativist tome with Minuteman leader Jim Gilchrist] and many of their readers have accused me first of promoting a North American Union. That's bull. I've never promoted a North American Union.

What I have written extensively about is how to create a North American community of the U.S., Canada, and Mexico. The difference between a union and a community is the difference between the United States and a free association of sovereign states. The United States is a union. If there were a North American Union, there would be one capital and one national government in the U.S., Canada and Mexico. I have never proposed that, nor do I know anyone else who has.

What I think is both desirable and necessary is a different relationship between the three countries of North America, not only because of the rapid growth of trade and investment among our countries and the need to find ways to share the benefits of that growth among all the people of the three countries, but also to enhance our security against terrorism and other threats.

Historically, our two neighbors have wanted a more distant relationship from the U.S. because of the sheer power of the United States. Now they understand that their economies are very dependent on ours and a closer relationship would benefit them. The great irony is that Americans now seem more fearful of Canada and Mexico, despite the fact that their economies, population, and military power are a small fraction of that of the U.S. Despite this asymmetry in power and wealth, there are many in the United States that apparently feel that Canada and Mexico will take us over. And they see a North American community as a path towards that.

INTELLIGENCE REPORT The nativists also charge you with promoting a North American currency to be called the "Amero." Is that so?
PASTOR I borrowed that idea from a Canadian economist called H. G. Grubel. But I just put his idea on the table for discussion, along with other options. The problem is that the right-wing attacks have made people so fearful they don't even want to open a discussion.

As economies become more integrated, the cost of changing money and of anticipating sharp changes in the exchange rate become a burden on the economies. That is why Europe moved to a single currency. A few economists have begun to raise the question as to what can be learned from Europe's rocky road to a single currency that might be helpful in thinking about the economic future of North America. These are complicated issues that will take time to study. The problem is that these vicious, know-nothing attacks have stifled research and debate.

There are other charges that I'm trying to dissolve the United States, erase our borders, discard the Constitution. All these are ridiculous and false. And also that I'm the principal author of President Bush's "Security and Prosperity Partnership," which emerged from a trilateral conference among the three heads of government of North America in Waco, Texas. Regarding this last charge, I was co-chair of a tri-national study group organized by the Council on Foreign Relations, which prepared a report on building a North American community. That report followed in some ways what I had previously written in a book of a similar name. But it also was different because the report was a consensus document of 31 very strong-willed and intelligent leaders from all three countries who had their own ideas. Our group issued a preliminary statement just before Waco, and we are either given credit or blame for encouraging the three leaders of Canada, Mexico, and the United States to do a Security and Prosperity Partnership. I'm glad we encouraged the three leaders to propose a new initiative, but frankly I think their new initiative is quite timid. Ironically, it provoked fear because the governments tried to downplay their own initiative, and not ask the Congress for anything.

INTELLIGENCE REPORT What are the three governments doing with respect to the SPP?
PASTOR They're not doing much at all. They have set up dozens of working groups to look at a wide range of issues related to regulations and border security, and they are looking at "rules of origin" provisions one at a time. What they're trying to do is well-intentioned, but they seem to measure progress by counting the number of meetings that bureaucrats attend.

I wish there were more to it. The major thrust of the right-wing criticism is that there is more to it, that it's bad, and that it is secret. Unfortunately, that criticism has inhibited the governments from taking their own initiative seriously.

INTELLIGENCE REPORT What's the most that could come out of this process?
PASTOR To do anything serious would require all three countries to come to an agreement, which would require a [congressional] debate. But all three governments are now "minority" governments, and are reluctant to begin such a debate. Therefore, the most one can expect from the SPP is incremental and timid — in other words, some regulatory cooperation.

INTELLIGENCE REPORT But to read some of the conspiracy theorists, the NAU would ultimately result in some kind of international court that could do things like jail Christians in the United States who preach against homosexuality. Is there anything to this?
PASTOR That's totally ridiculous. The only way that could happen is if the U.S. Congress accepted it, but that won't happen.

INTELLIGENCE REPORT Does it surprise you that the conspiracy theories about the NAU and SPP make their way into mainstream news venues?
PASTOR That is partly due to cable TV and the development of niche journalism where people like Lou Dobbs can make a program based on fears of immigration. Their programs aim to promote their views, not to have a discussion. Bill O'Reilly will prevent the audience from hearing you if you're not saying what he wants them to hear. Their programs are for people like them to yell at their targets of opportunity. As an academic, I'm of two minds about going on these shows. On the one hand, I want to explain my ideas and have a good discussion. On the other hand, Bill O'Reilly and Lou Dobbs do not let you do that.

INTELLIGENCE REPORT What do you think is behind all this fear-mongering?
PASTOR I think there are two different phenomena that have begun to interact and create an "imperfect storm," if you will. On the one hand, there has always been xenophobia in America — a fear of the world, a fear of American engagements in the world, a desire to isolate the United States as a way to protect America's precious bodily fluids. That's always been there, but there are different moments in time when those views become stronger, when there's fear in America. That's the second element, which makes this more compelling — the fear that started with Sept. 11 [2001] and that has been mobilized further by immigration and especially by undocumented immigration. This has given people the feeling that they're losing control, that somehow their politicians are giving away the store. So, in brief, a combination of historical xenophobia and contemporary fears stemming from 9/11 and illegal migration are keeping our leaders from beginning an extraordinarily important discussion on the future of North America.

The tragedy is that this is the time to begin to grapple with hard issues that could generate significant growth in North America and that could make us more prosperous and secure and a model for the world. Instead, we are compelled to respond to ludicrous charges of a North American Union.