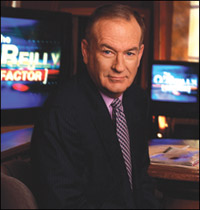 A "national underground network" of pink pistol-packing lesbians is terrorizing America. "All across the country," they are raping young girls, attacking heterosexual males at random, and forcibly indoctrinating children as young as 10 into the lesbian lifestyle, according to a shocking June 21 segment on the popular Fox News Channel program, "The O'Reilly Factor."

Wheeler, a Washington, D.C., Metropolitan Police Department officer-turned-paid Fox News commentator, launched right in: "Well, you know, there is this national underground network, if you will, Bill, of women that's lesbians and also some men groups that's actually recruiting kids as young as 10 years old in a lot of the schools in the communities all across the country," he reported. "And they actually carry a number of weapons. And they commit a number of crimes."

Wheeler asserted that "we've actually counted, just in the Washington, D.C., area alone, that's Washington D.C., Maryland, and Virginia, well over 150 of these crews. … And they — like I said, they recruit these kids to be members of these gangs."

O'Reilly asked, "Now, when they recruit the kids, are they indoctrinating them into homosexuality?"

"Yes," Wheeler answered. "As a matter of fact, some of the kids have actually reported that they were forced into, you know, performing sex acts and doing sex acts with some of these people."

Flabbergasted by the sheer depravity of it all, O'Reilly nevertheless forged ahead. "I never thought of this," said the host of the "no-spin zone." "It makes sense that, if you had lawless gay people, they would do this kind of thing. You associate homosexuality more with a social movement, not a criminal movement. But you're saying this is all over the country, detective?"

"It's all over the country," Wheeler replied. "I mean, you go from New York to California to wherever you want to name, you can see these organizations."

Next came the pink guns. "Now, the other thing, too, that our viewers are going to find very, very interesting, is the fact that they actually carry—some of these groups carry pink pistols," Wheeler said. "They call themselves the pink-pistol-packing group. And these are lesbians that actually carry pistols. That's 9-millimeter Glocks. They use these. They commit crimes, and they cause a lot of hurt to a lot of people."

Gaithersburg, Md., Detective Patrick Word, president of the Mid-Atlantic Regional Gang Investigators Network, an intelligence-sharing organization of 400 criminal justice professionals in Maryland, Washington, D.C., and Virginia, said there is no evidence whatsoever of a lesbian gang epidemic in his region. "Our membership reports only one lesbian gang," Word told the Intelligence Report.

Sgt. Brett Parson, a member and former commander of the D.C. Metropolitan Police Department's Gay and Lesbian Liaison Unit, also questioned Wheeler's numbers. "We have 150 to 175 total gangs in the D.C. area, and out of those only nine where the predominance of members are female," he said. "You simply can't make the jump that they are lesbians. I think it is fair to talk about violence and female gangs. But to sensationalize or marginalize a community by making a statement like that seems irresponsible."

Confronted by the Intelligence Report, Wheeler was unable, in several phone and E-mail exchanges over a two-day period, to specify a single law enforcement agency or officer, police report, media account or any other source he relied upon for his D.C. area lesbian gangs claim. But he insisted that his report was accurate and that any law enforcement officer who disagrees is "out of touch."

"For some reason or other, these organizations don't lay it on the line because they don't know what is going on on the streets," said Wheeler. "This is a serious crisis and the so-called experts are missing it."

According to Wheeler's personal website — www.rod007.com — he is a member of Jericho City of Praise, a conservative Christian megachurch in Landover, Md., whose leadership publicly advocates against equal rights for gays and lesbians. The website details Wheeler's 500-plus appearances on MSNBC, Court TV and Fox News Channel shows including "The O'Reilly Factor," "On the Record With Greta Van Sustern," and "Hannity & Colmes."

Fox News officials and Bill O'Reilly did not return E-mails seeking comment for this story. O'Reilly is quoted on Wheeler's website heralding Wheeler as "America's most recognized and trusted authority on crime analysis and law enforcement."

Another ringing celebrity endorsement on the site is attributed to White House Press Secretary Tony Snow: "We turn to Rod Wheeler to help us better understand and solve some of these terrible crimes in America."

Wheeler told the Report that he spent seven years in professional law enforcement before going to work as a corporate security officer for McDonald's Corp., a job he has since left. These days, Wheeler is a "food defense specialist" for the American Institute of Baking. Just this spring, he publicly warned that the Big Mac is vulnerable to bioterrorist attacks at "250 points" during production.

Viewers left wondering what, exactly, Wheeler was smoking before he went on "The O'Reilly Factor" might find a 1994 Washington Times article intriguing. The paper reported that Wheeler was suspended from the Metro D.C. police force after testing positive for marijuana in a random drug test. Wheeler told the Report that samples were mixed up and that he was eventually "exonerated."

Facts and Fiction
The only specific instance of actual violent lesbian gang activity that Wheeler cited on "The O'Reilly Factor" was a May 19 attack on a 15-year-old boy who was stabbed near a transit station in Prince George's County, Md. "And the police found out that it was a group of six women who identified themselves as being members of a lesbian gang that actually attacked this young man," Wheeler told O'Reilly.

According to a June 15 article in The Washington Post, however, two of the three individuals arrested in that assault were teenage males, though the article did note that, "Metro officials said the fight was between two gay and lesbian gangs that operate in Maryland."

An extensive Internet search seeking to verify O'Reilly's assertion in the introduction to Wheeler's interview that a lesbian gang called Dykes Taking Over is "terrorizing people" in Philadelphia turned up only one possible source. WCAU-TV, a local NBC affiliate in that city, reported in 2004 that a small group of 8th-grade girls at a West Philadelphia middle school were allegedly "bullying, groping and harassing" other girls in gym class with "gay remarks." The report made no mention of the 8th-graders using pink pistols or other weapons.

Similarly, O'Reilly's introductory mention of a Tennessee lesbian gang called Gays Taking Over that is "involved in raping young girls" appears to have been based solely on a highly dubious Feb. 28 television report from WPTY-TV, an ABC affiliate in Memphis, Tenn. Featuring dramatic "reenactments" of high school bathroom rape scenes shot in grainy black-and-white footage, the lengthy segment's vaguely salacious claims about local high school girls being raped and "sodomized" with "sex toys bought on the Internet" was based almost entirely on the lurid musings of a single Shelby County gang officer.

Titled "Violent Femmes," the sweeps-week segment was so thinly sourced and grotesquely sensationalized that it's difficult to believe that any professional journalist found it to be credible. And it wasn't. Under intense pressure from local gay and lesbian activists, the affiliate's station manager finally admitted that WPTY-TV's reporters had neither independently verified the gang officer's overheated claims nor obtained any documentary evidence such as arrest records or written police reports to substantiate their tale. As the station grudgingly conceded, "Our investigation did not turn up widespread violence in schools due to this."

Rashad Robinson, the senior director of media programs for Gays and Lesbians Against Defamation (GLAAD), said that while he wasn't pleased to see the inflammatory "Violent Femmes" segment used as a source for a national television "report" on Fox News, "I wasn't startled."

"The sad truth is that sensationalized, undocumented, fear-driven reports about [gays and lesbians] preying on children are proven to be a ratings winner, and the station managers and news producers know that because they're reporting about gays and lesbians they don't have to be as concerned about backing up their sensationalism with actual facts and figures," Robinson told the Report.

"The O'Reilly segment essentially reported a national epidemic of lesbian gangs preying on young girls without offering up one solid figure or one credible source. This type of reporting creates a climate of homophobia and fear and perpetuates dangerous stereotypes of gay people and definitely helps feed into a climate of anti-gay discrimination and violence, which is a true national epidemic, but not one you're likely to see reported with such zeal by Bill O'Reilly."

The third case O'Reilly referenced, the assault on 29-year-old Wayne Buckle in New York City last August, did actually occur. Buckle was whipped with belts and stabbed by women who identified themselves as lesbians. But there is no evidence the women are members of a criminal gang, and O'Reilly failed to report that the attack was prompted, according to the New York Daily News, by Buckle spitting, cursing, and flicking a cigarette at the women after one of them rebuffed his sidewalk sexual advances.

And then there are the pink Glocks.

There have been no media reports at all of lesbian gangs committing violence while armed with pink-painted 9-millimeter pistols or calling themselves, as Wheeler colorfully described it, "the pink pistol-packing group." Several law enforcement officers contacted by the Report found the idea laughable.

There is, however, a well-known national organization of gay and lesbian firearms owners called the Pink Pistols. This group has never been implicated in any gang activity. Asked by the Intelligence Report if he'd perhaps confused the Pink Pistols with a criminal organization, Wheeler denied it. "I wasn't referring to their pink pistols," Wheeler said. "These [lesbian] crews, these gangs, they buy a Glock 9-millimeter and you can paint them pink."

Pink Pistols spokesperson Gwen Patton said the pistols the group's members carry are, by and large, not actually colored pink. The Pink Pistols are now demanding an on-air apology from Wheeler, O'Reilly and Fox News.

"A lot of people are confusing these imaginary, lesbian, gun-carrying gangs with our organization," said Patton. "We would appreciate it if Mr. O'Reilly would invite Mr. Wheeler back onto his show to clear up this nonsense in the same arena it started — on national TV."