Are threats protected speech under the First Amendment? What about publishing enemies' home addresses? It depends 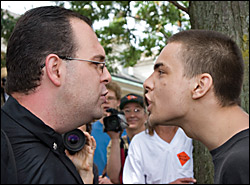 When a radio talk show host calls for the death of all illegal immigrants, can he be held liable in court for making a threat? What if the radio host (or Internet blogger) specifically singles someone out for his hateful threats, such as: "John Smith should be hung from the nearest lamppost" and provides John Smith's address? The answer is, it depends.

The First Amendment to the Constitution declares that "Congress shall make no law ... abridging the freedom of speech." But not all speech is protected by the Constitution. Exceptions exist for speech that is obscene, that presents a clear and present danger, for "fighting words," or for speech intended to incite "imminent lawless action."

Another kind of speech that is not protected is a "true threat" — something that a reasonable listener would understand as an actual threat of violence.

In Watts v. U.S (1969), the Supreme Court ruled that a man protesting the draft hadn't issued a true threat when he said that he would shoot President Lyndon Johnson as soon as he was issued a rifle. According to the high court, the context of the man's speech made it clear that he wouldn't actually shoot the president and was simply engaging in political hyperbole.

A similar case is NAACP v. Claiborne Hardware (1982), involving a 1966 boycott by black protesters in Mississippi. Civil rights leader Charles Evers gave a speech promising that "if we catch any of you going in any of them racist stores, we're gonna break your damn neck." The Supreme Court unanimously held that Evers' speech was constitutionally protected. It was not followed by violence, and there was no evidence Evers had personally authorized or threatened actual violence. According to the Court, this was strong rhetoric but not a "true threat."

Virginia v. Black (2003) is perhaps the most relevant Supreme Court case to address the question of whether a targeted threat made over the Internet or radio is protected speech. Black held that a statement is not a criminally punishable threat unless it was made "with the intent of placing the victim in fear of bodily harm or death." The Court's focus was not on the possibility that the threat would actually be carried out, but on whether the target of the threat would be reasonably put in fear of attack.

A case from the Ninth Circuit makes it clear that there are limits to the constitutional protection of Internet-based speech that calls for others to commit acts of violence. Planned Parenthood of Columbia/Willamette, Inc. v. American Coalition of Life Activists (2002) involved two types of threats by a radical anti-abortion group. First, the defendants had distributed "Wanted"-style posters with abortion doctors' names on them (there has been a pattern of such posters being distributed before the murder of several abortion providers). Second, the defendants created a "Nuremberg Files" website, which collected personal information about abortion providers, made that information publicly available, grayed the names of providers who had been injured, and struck out the names of providers who had been killed. The website did not explicitly threaten the doctors, but clearly encouraged and celebrated their deaths.

In a 6-to-5 decision by the entire ("en banc") Court of Appeals that was denied review by the Supreme Court, the court found that the "wanted posters," along with the personal information about clinic workers that was posted to the website, were "true threats" that were not protected by the First Amendment. The threatening nature of the posters "was reinforced by the scorecard in The Nuremberg Files." The effect of the Planned Parenthood ruling was to prohibit the publication of personal information about particular persons "with the specific intent to threaten them."

In the end, each case will turn on its own facts. But one thing is clear: Racist talk show hosts and Internet bloggers who make specific threats against individuals or call on others to do so and who intend to put their targets in fear of being attacked may indeed be held both criminally and civilly liable.