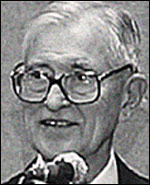 "Radical traditionalist Catholic" E. Michael Jones, a rabid anti-Semite, visited the Washington, D.C., offices of veteran Holocaust denier Willis Carto last March. While there, he found out something surprising: Carto has apparently become an adherent of Christian Identity, a theology that contends whites, not Jews, are the true Israelites of the Bible and that Jews are biologically descended from Satan.

Jones was in Carto's office being interviewed for The American Free Press, a Carto tabloid. The topic of the day was Jones' "thesis of the revolutionary Jew," which he has been expounding on in article after article in his magazine, Culture Wars. Recent installments have included "The Revolutionary Jew and His Impact on World History" and "Judaizing: Then and Now."

Jones wrote later that Carto had asked him during his visit, "So you don't hold much to the racial explanation of Christian [I]dentity?" A self-described Catholic, though of an excommunicated and anti-Semitic strain, Jones says he replied: "No, the New Israel is the Catholic Church. It has no racial identity." Jones also wrote that Carto had previously promoted Christian Identity "in a pamphlet he sent to me."

Willis Carto has been a major figure on the American radical right since the 1950s, when he set up his anti-Semitic Liberty Lobby in Washington. Although at one time he had access to leading politicians in the capital, he eventually became infamous for his pro-Nazi and rabidly anti-Jewish views and lost those connections. In 1978, he founded the first major American Holocaust denial outfit, the Institute for Historical Review. Throughout his career, Carto has been known for his anti-Semitic and anti-black radicalism, but he has previously shown little interest in religion, even radical religion.

Further evidence for Carto's dabbling in Identity, which sees in Jews the eternal and biological enemy of whites, is found in his Holocaust denial journal, The Barnes Review. The July/August issue advertises "The Early Israelites," a Christian Identity tome.