The home of a well-known molecular biologist was firebombed early on the morning of Aug. 2 with a homemade device police called "a Molotov cocktail on steroids." 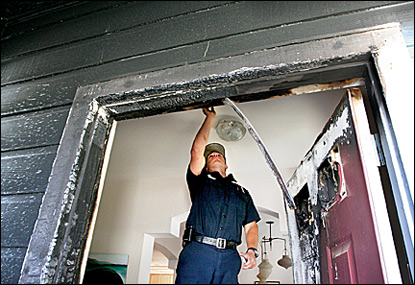 Authorities characterized a firebomb attack on the home of a California researcher as attempted murder.

The home of a well-known University of California, Santa Cruz, molecular biologist was firebombed early on the morning of Aug. 2 with a homemade device police called "a Molotov cocktail on steroids." David Feldheim, his wife and two young children escaped the blaze by climbing out of a second-story window and descending a fire ladder as their home filled with smoke and flames.

The attack, which police branded an act of "domestic terrorism," occurred just four days after a threatening pamphlet containing Feldheim's picture and home address, along with the photos and addresses of a dozen other researchers, was found on a downtown Santa Cruz coffee house's bulletin board.

Feldheim experiments on mice as part of his research into the development of brain functions related to eyesight. He told the San Francisco Chronicle that his work is important "so we can fix these connections [between the brain and the eyes] after damage due to injury or disease."

On the same day Feldheim and his family were attacked, a station wagon belonging to another Santa Cruz researcher was firebombed with a similar device. Although no group has claimed credit for either attack, Jerry Vlasak, spokesman for the North American Animal Liberation Press Office, which often posts communiqués from underground animal rights activists, defended the bombing of Feldheim's house as "necessary."

"They were trying to send a message to this guy who won't listen to reason, that if he doesn't stop hurting animals, more drastic measures would be taken," Vlasak said of the bombers.

The "animal liberation" mouthpiece also said that Feldheim's children were legitimate targets. "If their father is willing to continue his livelihood in order to continue chopping up animals in a laboratory, then his children are old enough to recognize the consequences," Vlasak said.

Feldheim's daughter is 6 years old. His son is 7.

More than 50 law enforcement officers, including special agents with the FBI's regional terrorism task force, are investigating the attacks, which are being treated as attempted homicides. Although violence from animal-rights radicals has been growing in recent years, no American in that movement has yet been charged with a crime of personal violence as serious as attempted murder.

No arrests have been made. The University of California, the City of Santa Cruz, the FBI and the Humane Society of the United States teamed up to offer a $30,000 award for information leading to a conviction of the person or persons responsible.

"The main thing I want to get across is that I and the community don't consider this protest, we consider this terrorism," said Santa Cruz Mayor Ryan Connerty.