Several prominent right-wing commentators and anti-immigration leaders were humiliated after they rushed to judgment in a pair of cases in which conservative activists filed bogus police reports claiming to be victims of violent crimes. 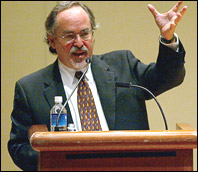 Several prominent right-wing commentators and anti-immigration leaders were humiliated last December after they rushed to judgment in a pair of unrelated but equally bizarre cases in which conservative activists filed bogus police reports claiming to be victims of violent crimes.

The first began when Princeton University student and anti-gay activist Francisco Nava, 23, showed up at a campus health center with a swollen jaw, bloody mouth and facial lacerations. Nava told police that two masked men had attacked him, repeatedly slamming his head against a brick wall while shouting at him to "shut the f--- up." Nava further claimed that he'd been receiving death threats since the previous October, when he published a column in the student-run Daily Princetonian that criticized the free distribution of condoms on campus.

A number of leading right-wing bloggers and commentators — most notably David Horowitz, a former leftist who has made a latter-day career of ranting about alleged anticonservative and anti-Zionist bias in America's universities — were quick to angrily label the apparent attack on Nava a hate crime.

"The left has now become the hate group," a pious Horowitz told The New York Sun.

After Nava made his claims, Horowitz posted a link to the Sun's report about the supposed attack on Nava to his popular website, Frontpagemag.com, under the headline, "Student beaten unconscious for conservative views." That same day, however, when police confronted Nava about inconsistencies in his story, he admitted faking the attack as well as sending death threat E-mails anonymously to himself, three other Princeton students, and to a conservative Princeton professor who had taken up his cause.

It quickly developed that Nava had similarly fabricated a death threat against himself while at an expensive private high school. Horowitz offered no apology or clarification after his angry attack on "the left."

That same week, anti-immigration blogs and online forums were atwitter with the tale of 44-year-old Angela D. Wilburn, the wife of Ozarks Minutemen founder and militant Missouri anti-immigration activist Brian Wilburn. In the wee hours of last Dec. 4, she had called 911 to report that three brown-skinned, Spanish-speaking men had broken into her mobile home. One of the intruders, she reported, had raped her and then shot her in the knee.

But three days after Nava's tale of masked leftists fell apart, Wilburn admitted her story was equally false, explaining she'd accidentally shot herself with her husband's gun while investigating a suspicious noise. There was no rape, no break-in, and no men with brown skin.

Wilburn was arrested and charged with filing a false report. Greene County Sheriff's Department officials said they plan to seek restitution for the 100 hours they wasted investigating her fanciful account.

Meanwhile, Wilburn's husband, whose organization presents itself as a first line of defense against "criminal alien invaders," told the Springfield News-Leader that his wife's bogus report of being terrorized, sexually assaulted and shot by Mexican home invaders "had nothing to do with the Minutemen. It was just a bad decision on her part."