White supremacist leaders are making a concerted effort to recruit active-duty soldiers and recent combat veterans of the wars in Iraq and Afghanistan, according to a new FBI report. 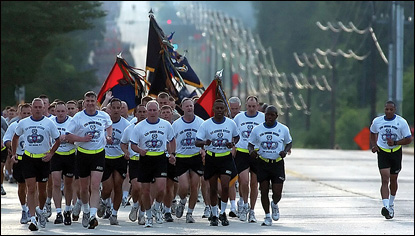 The U.S. military has struggled with the problem of right-wing extremists in the armed services for decades. A key worry is that racists may wreck morale and safety by sowing racial enmity within their units.

White supremacist leaders are making a concerted effort to recruit active-duty soldiers and recent combat veterans of the wars in Iraq and Afghanistan, according to a new FBI report. The unclassified FBI Intelligence Assessment, titled "White Supremacist Recruitment of Military Personnel Since 9/11," bolsters the findings of a 2006 Intelligence Report exposé that revealed that alarming numbers of racist extremists were taking advantage of lowered wartime recruiting standards to enlist in the armed services.

"Military experience is found throughout the white supremacist extremist movement as a result of recruitment campaigns by extremist groups and self-recruitment by veterans sympathetic to white supremacist causes," the FBI report states. "Extremist leaders seek to recruit members with military experience in order to exploit their discipline, knowledge of firearms, explosives and tactical skills as well as [in the case of active duty soldiers] their access to weapons and intelligence."

Based on analysis of FBI case files from October 2001 to May 2008, the report identified 203 military personnel or veterans who were active members in white supremacist organizations during that period.

"Looking ahead, current and former military personnel belonging to white supremacist extremist organizations who experience frustration at the inability of these organizations to achieve their goals may choose to found new, more operationally minded and operationally capable groups," the report concludes. "The military training veterans bring to the movement and their potential to pass this training on to others can increase the ability of lone offenders to carry out violence from the movement's fringes."