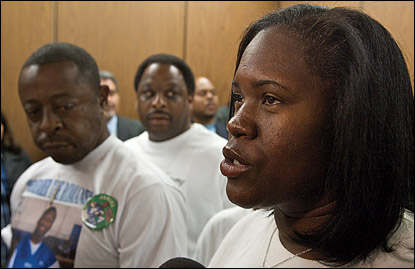 U.S. Army Sgt. Anita Shaw, with her husband, Jamiel Shaw Sr. (far left), talks about the murder of their son.

Washington, D.C. — Wearing T-shirts with a picture of their late son, Jamiel and Anita Shaw stepped in front of a podium bearing the logo of the Federation for American Immigration Reform (FAIR). The Shaws had arrived in Washington that morning on a flight from Los Angeles. They faced more than 100 people gathered on the west lawn of the U.S. Capitol.

"I was in Baghdad, Iraq, when my son was murdered by an illegal alien gangbanger," Army Sgt. Anita Shaw told activists taking part in "Lobby Days," FAIR's annual drive to influence members of Congress on immigration policy. Jamiel Shaw broke down several times as he described how he heard gunshots and then saw 17-year-old Jamiel Shaw Jr. bleeding on the sidewalk. The younger Shaw, a high school football star, was killed on March 2 near his home in South Los Angeles. Police say two Latino men drove up to Jamiel, asked him which gang he belonged to, and shot him when he didn't reply. (Shaw had no criminal history and was not affiliated with a gang.) Nineteen-year-old Pedro Espinoza, an undocumented immigrant, has pleaded not guilty to Shaw's murder.

"You would think he'd be trying to act like an American," Jamiel Shaw said of Espinoza. "But sometimes they don't want to be American. They want us to be like their country. And he was from Mexico. I'm not going to sugarcoat it."

But Shaw told his audience that the race of his son's killer had no bearing on his anger. "There's a lot of black illegal aliens, there's Latinos, whites. It doesn't matter to me. I want them all [out]," he said to loud applause. Since their son's death, the Shaws have been lobbying for Jamiel's Law, a proposed Los Angeles city ordinance that would require police to go after immigrant gang members who are in the country without papers but haven't committed any non-immigration violations.

The Shaws' grief is understandable. Still, there is a question as to whether they are being used because of their race. On June 21, the Shaws — who are black — spoke at a rally co-sponsored by Save Our State, an anti-immigration hate group that has allowed racist skinheads to join its protests and whose founder wrote on the group's online forum that "just because one believes in white separatism that does not make them a racist." Then, on Sept. 10, the Shaws were featured speakers at the gathering that launched FAIR's "Hold Their Feet to the Fire," a talk radio blitz held in conjunction with Lobby Days. Although there is no evidence that the Shaws had any idea of Save Our State's background or FAIR's connections to white nationalist ideology, the Southern Poverty Law Center lists both organizations as hate groups.

Cognitive Dissonance
The Shaws' appearance highlighted the glaring disconnect between the way FAIR tries to present itself publicly and the reality of its association with white racism. In 2006 FAIR created a front group, Choose Black America, to recruit black Americans to its cause and to deflect accusations of racism. Yet FAIR founder John Tanton, who still serves on FAIR's board, has long promoted the ideas of white nationalists to FAIR leaders and others — and FAIR officials have unflaggingly stood by their founder, insisting he is no racist.

Contradictions between the mainstream image that FAIR seeks to cultivate and the group's links to extremists weren't hard to find during its three-day campaign on Capitol Hill. The event brought dozens of private citizens to Washington to lobby lawmakers on behalf of FAIR. While the anti-immigration activists met with members of Congress, more than 40 talk show hosts conducted two days of live broadcasts from "radio row" at the Phoenix Park Hotel. The most prominent among them was Lou Dobbs, the host of CNN's "Lou Dobbs Tonight" who has repeatedly spread false information about undocumented immigrants, including the myth that they've contributed to a dramatic surge in U.S. leprosy cases. Dobbs received one of FAIR's "immigration reform awards" at a private reception during Hold Their Feet to the Fire.

But even as they were being heralded as immigration reformists, Dobbs and radio personality Roger Hedgecock, who co-sponsored Hold Their Feet to the Fire with FAIR, were hosting extremists on their shows. Hedgecock invited Peter Brimelow, who runs a racist, anti-immigration website called VDARE.com, to appear on a Sept. 11 broadcast from radio row. Brimelow has advocated changing U.S. immigration quotas to let in mostly whites and praised the Pioneer Fund — a eugenicist group set up to encourage "race betterment" — as "a perfectly respectable institution." He has also been interviewed on "The Political Cesspool," a white nationalist radio show whose guests have included former Klan boss David Duke and long-time Holocaust denier Mark Weber.

Dobbs spoke on Sept. 10 from radio row with another man who can include a "Political Cesspool" appearance on his resume: Chuck Baldwin, the then-presidential candidate of the staunchly antigovernment, anti-gay Constitution Party. Baldwin has written that "the South was right in the War Between the States" and that Martin Luther King Jr. "brought havoc and unrest to America as few men have ever done." Baldwin asserted during a campaign appearance that Sept. 11 could have been an inside job, and vowed, if elected, to appoint an independent committee to uncover the truth.

Attacking the 'Elites'
Speakers at FAIR's only public event during Hold Their Feet to the Fire repeatedly invoked that 2001 tragedy to argue that undocumented immigrants crossing the U.S.-Mexico border pose a serious national security threat. "9/11 is not gone forever from the public memory," FAIR President Dan Stein declared before the Shaws took the podium. "It's still fresh in the minds of American people. We're not going to let elites in this country bury the urgent priorities that need to be done."

Though billed as a press conference, the event felt more like a political rally. U.S. Reps. Duncan Hunter, Brian Bilbray and Darrell Issa, all California Republicans, addressed the gathering, where activists and talk show hosts far outnumbered journalists. (While some activists paid their own way, FAIR helped defray the lodging expenses of those who attended as part of an organization.) "Look at all of you, and let's have a round of applause for all those people who came to make sure this Congress hears from the people," cheered Hedgecock, the San Diego talk show host. Activists waved small American flags and held signs that commanded, "Free Ramos and Compean," the U.S. Border Patrol agents sentenced to a maximum of 12 years in prison for the 2005 shooting of an unarmed, fleeing drug smuggler. (Ignacio Ramos's wife, Monica Ramos, and father-in-law, Joe Loya, looked on from the crowd; Monica Ramos appeared on Dobbs' show that night.)

The supposed press conference lacked a question-and-answer session for journalists; in fact, the speakers did not seem to be addressing the press at all. Stein, who served as a master of ceremonies, led the audience through a series of call-and-response questions. "Are we going to let both political candidates go through this election without talking about the issue?" he asked.

Stein lamented that people weren't hearing much about immigration at the Republican and Democratic national conventions. "You have to wonder why that is. This is an issue people really are concerned about."

Actually, recent surveys suggest that that is changing: immigration has tumbled to near the bottom of Americans' list of concerns. According to this summer's monthly Gallup polls, the percentage of Americans naming immigration as the nation's top problem has dropped to the low single digits, ranking it below a host of other issues including the economy, the situation in Iraq, fuel prices, dissatisfaction with government, the energy crisis, unemployment and health care.

Not only has its cause lost traction, but also press coverage of FAIR has increasingly noted its hate group designation. Though he's declined to answer questions from the Intelligence Report, Stein alluded to the recent criticism during the Sept. 10 gathering: "The opposition got upset and they decided they had to try mudslinging and that's been going on. But you know what, when you sling mud at an organization like FAIR and its 200,000 members, you're slinging mud at people who have worked hard all their lives to try to bring about reform, people who have lost loved ones, people whose husbands are in jail for trying to defend our borders and do the right thing, victims of 9/11. Doing the right thing is doing what we're all about."

Yet doing the right thing apparently does not include severing ties with racists. The group that invited the Shaws to help make its case continues to embrace ideologues like Tanton, who said in an infamous 1986 memo: "As whites see their power and control over their lives declining, will they simply go quietly into the night? Or will there be an explosion?"