In a Texas town notorious for a grotesque 1998 murder, a former Klan leader mellows out with Latino kids playing futbol

Jasper, Texas — James Roesch is a good decade older than the Mexican teenagers he's trying to keep up with on a green felt indoor soccer field. They gracefully swerve around the goateed, baby-faced 27-year-old, scoring by ricocheting the ball off a rectangular wall indent that serves as a makeshift goal.

Most of the players call Roesch by his first name. They know him as the guy who often supervises youth soccer nights at The Indoor, a recreational soccer facility in Jasper that opened last May. But a few of them also know something about Roesch that he'd prefer to keep quiet: In 1999, he became the imperial wizard, or national leader, of the Knights of the White Kamelia, a Ku Klux Klan group.

Roesch's background with the Klan is hardly a secret. Type his name into Internet search engines and up pops Imperial Wizard Roesch. He's been quite the white-power showboat. But that's all in the past. At least, that is, according to Roesch, who claims he became a father, found Jesus, quit the Klan, renounced racism, and became a soccer fanatic, more or less in that order.

"Honestly, I came to Christ, I really did," he told the Intelligence Report when reached by phone at The Indoor. (Roesch also serves on the board of the Pineywoods Youth Soccer League, an outdoor soccer league open to boys and girls from ages 4 to 17.) "I had a religious awakening. I realized the path that I was on wasn't the path that people should be taking."

Roesch started down the path to Klan leadership in the mid-1990s, when he joined the Knights of the White Kamelia (KWK). He was in high school, and the KWK was at the height of its power with active chapters in eight states, a public access television show, and a proven knack for publicity stunts like holding recruiting drives on college campuses. 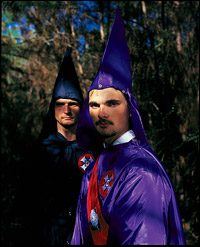 When James Roesch moved to Jasper, Texas, to set up a new Klan operation, he'd don his robes for just about anyone - especially press photographers - who asked. These days, he says he's put that all behind him.

As a rank-and-file member, Roesch liked to dress up in Klan robes and distribute racist pamphlets on street corners in his hometown of Ketterling, Ohio. Then, in 1996, the KWK was rocked by scandal when a Louisiana newspaper revealed that its imperial wizard at the time, Darrell Flinn, had a live-in girlfriend who was black. Flinn instantly vanished from the white supremacist scene. Two years later, Roesch, at the age of 19, was elected to lead the KWK after impressing a slim majority of fellow members with his detailed knowledge of Klan lore and secret customs.

Unfortunately for Roesch, arcane book knowledge did not translate into leadership acumen. Within a few weeks of his meteoric rise to power, about half of the KWK's members had quit in protest of their underripe new wizard's apparent incompetence.

Desperate for what's known in electoral politics as a "game changer," Roesch called a trick play. With as much fanfare as he could muster, he relocated himself and the KWK headquarters from Ohio to Jasper, a small city in deep East Texas which had recently been made infamous by one of the most notorious and gruesome American hate crimes of the late 20th century.

Murder and Marriage
On June 7, 1998, the summer before Roesch moved to Jasper, three drunken white men there, two of whom belonged to prison-based white supremacist gangs, had offered a ride to James Byrd Jr., a 49-year-old African American. Instead of taking Byrd home, the men beat him with a bat behind a convenience store, stripped him naked, chained him by the ankles to the rear bumper of a pickup truck and then dragged him for three miles. Byrd, who was alive for most of the dragging, died after his right arm and head were torn off when his body struck a sewage culvert. One week after Byrd's murder, about 30 members of the KWK and other Klan outfits, including Roesch, garnered widespread media coverage by marching in Jasper waving Confederate battle flags. 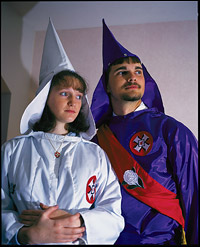 April Letney and James Roesch donned their finest Klanwear for their 2001 wedding, which was dutifully recorded by a magazine photographer.

"The social stereotype of what I was involved with before is pretty accurate," Roesch told the Report.

Roesch moved to Jasper in February 1999 during the capital murder trials of Byrd's killers. He lurked around the courthouse, chatting up journalists from around the world during lulls in the proceedings, trying to convince whoever would listen that his presence in Jasper represented a new era for the Klan in Texas.

But Roesch never really did a whole lot but talk. In March 2000, he claimed in an interview with Details magazine that he was promoting a stealth agenda by injecting Klan ideology into Jasper politics. "The Klan political platform is my political platform," he said. "I'll just take the name 'Klan' off it, and people will never know the difference."

When pressed for specific goals, though, all Roesch came up with was fixing potholes and renaming the city's Martin Luther King Boulevard. Roesch never did run for political office. But he did attend several Jasper school board meetings dressed in full imperial wizard regalia. He wore the same wizard outfit at his 2001 wedding to Jasper native April Letney. The two had met at a cross burning outside Jasper. Filmed for a documentary, their nuptials featured the wedding party firing guns in the air and raising their arms in sieg-heil salutes.

Soon thereafter, a Details photographer snapped a shot of the newly wedded couple at James Byrd's grave. The magazine's profile of Roesch also includes a separate, close-up photo of a sticker affixed to Byrd's headstone that proclaimed in blood red letters, "A Ku Klux Klansmen Was Here." According to Details, Roesch placed the sticker. Roesch adamantly denied that charge in his recent interview with the Intelligence Report. "That's not true, " he said. "They set me up. They wanted me to show them where the grave was and then they accused me of doing it."

Be that as it may, Roesch was fired from his manual labor job with a logging company as a result of the graveside photos. He and his wife then launched a home-based business sewing and selling golf knickers and Klan robes. In 2001, Roesch applied for a job as a prison guard with the Texas Department of Corrections.

He made it as far as cadet school, where he submitted a handwritten request to be assigned upon graduation to the state's death row facility in nearby Livingston, Texas, where two of the men convicted of murdering Byrd awaited execution. Investigative records obtained by the Austin American-Statesman showed that Roesch had somehow passed the initial background check, but then raised suspicions during a training lecture on prison gangs when he bragged that he had friends who were members of the Aryan Brotherhood of Texas, a white supremacist prison gang. Internal affairs investigators took a closer look at Roesch and then asked him to provide a written statement about his Klan activity. He was given the boot shortly thereafter.

Canning the Klan
After his Klan affiliation terminated his fledgling career as a prison guard, James Roesch stopped appearing in public in Klan robes. He also stopped giving media interviews. The Knights of the White Kamelia's membership continued to dwindle until its sole remaining chapter closed up shop in 2004.

During his interview with the Report, Roesch declined to be specific about when he supposedly quit the Klan, saying only that it occurred sometime between 2001 and 2004. According to Roesch, it began with a church confession in which he recanted his white supremacist beliefs. Next, he said, he informed all of his Klan buddies by mail that he was leaving the movement. "I sent everybody I knew a letter that I wasn't going to be a part of it," Roesch said. "I've gotten hate mail up to about a year ago from people saying they thought I should die."

Asked what inspired his apparent change of heart, Roesch replies: "There wasn't really a crisis unless you call kids a crisis. I got four of my own. Who really wants to grow up and say, 'Hey my dad's a bigot?'"

Roesch's wife also told the Report that her husband is no longer active with the KWK or any other racist organization. "He used to be; he changed his ways," said April Roesch, who called her own Klan involvement "just a phase" and claimed that getting married in his-and-hers Klan robes wasn't her idea. "I'm an easygoing person, so I did it just to go along," she said. As proof that she has renounced racism, April Roesch cited her volunteering to be adult leader of a local Girl Scout troop with black members. She then expressed her disillusionment with the "invisible empire" of the KKK.

James Roesch is used to losing, at least on the soccer field. His leaden footwork indicates he's new to the sport and not particularly adept. But then soccer's a new game in Jasper, and The Indoor is the first facility of its kind. It opened just in time to provide respite from the 100-degree summer heat and become one of the few gathering places in Jasper for Latino immigrants, most of them recent arrivals in a community known for racial divisions between black and white. (The owner of The Indoor declined to be interviewed for this story).

Jasper Police Capt. Gerald Hall told the Report that it was news to him that Roesch has become heavily involved in local youth soccer, but he indicated that it's been quite a while since Roesch caused any trouble. "Over the past few years he fell completely off the radar. … Most people probably don't even know who he is," Hall said, adding that his department hasn't fielded any nervous phone calls from soccer moms or dads. Even back when Roesch was making headlines, Hall said, "He didn't have a following here and had to go to bigger cities to find people."

Roesch is having better luck finding soccer teammates. Along with his role at The Indoor and serving on the board of the youth league, Roesch plays on a mostly Latino outdoor soccer team in nearby Lufkin. He's even learning to speak broken Spanish. "Otra campo, amigo," he said to one Latino teenager he wanted to step across the midfield line during a late summer night of pick-up games at The Indoor. "The other field, friend." Roesch then cracked a joke, in English, about making sure that all the white guys were on his team. This seemed to be a humorous reference to the Latino players' adroit soccer skills rather than a nod to his Klan connections, about which Roesch claims he still faces questions from other Jasper residents on a regular basis.

"I deal with it every day. I mean every day," Roesch said. "I have no shame in it [his former Klan activity]. I'm going to be completely honest with whomever I come across. There's no purpose in trying to hide or conceal anything from anybody because it's out there."