The Rizoli twins have dropped the charade when it comes to their Holocaust denial. 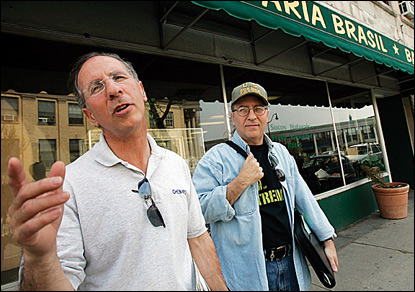 Jim and Joe Rizoli have dropped the charade of their Holocaust denial.

The Rizoli twins have dropped the charade when it comes to their Holocaust denial.

Two days after the Intelligence Report published a story earlier this year detailing allegations that Framingham, Mass., anti-immigration extremists Jim and Joe Rizoli have promoted Holocaust denial online using the handles of "jjrizo" and "JoRiz" since at least 2001, Jim Rizoli E-mailed the Report a message contradicting their earlier categorical denials.

"Great article about my brother and I," the E-mail read. "You will bring much attention to the Holocaust and people will hopefully see that there are a lot of 'loose ends' that need fixin [sic]."

The Rizolis, who spend most of their time these days attacking and demonizing Brazilian immigrants, had for years denied any involvement in Holocaust revisionism, claiming they were innocent victims of online identity theft. "Let me set you straight. My identity was stolen. People were posting things using my name," Jim Rizoli earlier told the Report.

Asked his opinion of Holocaust denial, Jim Rizoli replied, "I have no interest in that. Nothing. I'm not going to get into that."

But in his mock congratulatory E-mail, Rizoli suggested that readers of this magazine should "check out" the website nazigassings.com. Created by longtime Holocaust denier Friedrich Paul Berg, nazigassings.com repeatedly refers to the Holocaust as a hoax. "No one was ever killed in gas chambers, and there was NO program to physically exterminate all the Jews," the site insists.