Addison, Texas — "Environment is not about saving nature," the founder of Freedom Advocates, Michael Shaw, sternly warned an audience of antigovernment "Patriots" and far-right conspiracy theorists during a mid-July conference. "It's about a revolutionary coup in America. [Environmentalism] is to establish global governance and abandon the principles of Natural Law." Sustainable development policies, Shaw argued, will require "a police state" and ultimately "turn America into a globally governed homeland where humans are treated as biological resources."

One former popular Freedom 21er was disinvited. Bob Barr, a former conservative Republican congressman from Georgia, was asked not to return by the head of APC, Tom DeWeese, because Barr had talked to Al Gore about global warming. "This is not some nice little debate," DeWeese said he told someone in Barr's office. "This is war."

This year's conference linked up several of the far right's bogeymen into one giant whopper of a conspiracy about sustainable development policies that attempt to protect the earth for future generations. The basic thesis pushed at Freedom 21 was that the Security and Prosperity Partnership (SPP), a trade agreement between Canada, Mexico and the U.S. that includes some environmental requirements, is part of a nefarious and secret plan to merge the U.S, Canada and Mexico into something called the "North American Union" (NAU) — an entity which does not, in fact, exist, and has never been planned, despite the hysterical warnings of conspiracy theorists like Corsi.

Michael Coffman, executive director of the United Nations-hating Sovereignty International, took on something called Agenda 21, which was drawn up in 1992 for the UN Commission on Sustainable Development. Agenda 21 is a comprehensive blueprint of action to be taken globally, nationally and locally by organizations of the UN, governments, and major groups in every area in which humans impact on the environment (21 refers to the 21st century). In Coffman's eyes, Agenda 21 is a menace. 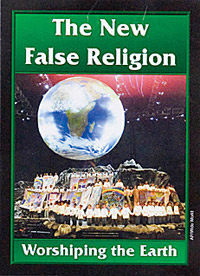 "An anti-human document, which takes aim at Western culture, and the Judeo-Christian and Islamic religions," is how Coffman referred to it. Coffman also alleged that Agenda 21 would lead to a kind of communist reallocation of property rights and redistribution of assets. Using a big word, Coffman labeled the proposed changes "usufructual," which he said means the government would own everything. Michael Chapman of Ed Watch, a group that opposes public education, reiterated Coffman's allegations that Agenda 21's real aim is to redistribute wealth. Coffman added that economic development is not being restricted in order to protect the environment, but rather to give power to the government.

The John Birch Society (JBS), a group that once insisted that President Eisenhower was a Communist Party member but now focuses on immigrant-bashing, agrees with Coffman. JBS was on hand to warn that environmentalists are really out to get your children. The JBS handed out cards featuring a strange depiction of a group of children holding hands under a large, glowing, balloon-like mockup of the earth that warned of "The New False Religion, Worshipping the Earth." "Advocates of a UN world government have drafted an Earth Charter, which they compare to the Ten Commandments and keep in an 'Ark of Hope,'" warns the JBS without any apparent reference to reality. "Will you let the United Nations or any other group undermine the faith of your family?" The JBS is so concerned with this that is has created a new website, www.getusout.org/earthworship, to battle "Earth Worship."

It turns out that environmentalists also are out to get your guns. Larry Pratt, of Gun Owners of America, a radical gun-rights group that doesn't believe in any restrictions on guns whatsoever, told the audience that "the major goal of the sustainable development movement is to disarm Americans."

Other notable conspiracy theorists put in an appearance at Freedom 21. Jerome Corsi — a man who has made a career of Catholic and Islam-bashing and is best known for co-authoring the error-ridden Unfit for Command: Swift Boat Veterans Speak Out that attacked John Kerry's war record — laid out several conspiracies during his keynote speech.

Corsi, who recently made headlines for his appearances on the racist radio show "The Political Cesspool," was also there to hawk his latest (and, once again, error-filled) book, Obama Nation. Corsi warned that the North American Union is imminent and that the Trans-Texas Corridor (TCC), a superhighway linking Mexico, the U.S., and Canada, must be stopped. Corsi described Washington, D.C., as "a day at the circus" and opined that Congress should be "put on a barge and sent out to sea." "It's time to make the U.N. into a parking lot," Corsi added.

Phyllis Schlafly, self-proclaimed defeater of the Equal Rights Amendment and founder of the anti-feminist Eagle Forum, was on hand to give one of her standard stump speeches railing against the courts, the government and public education. Schlafly was introduced by Cathie Adams, who leads the Eagle Forum's Texas branch. "Feminism has destroyed society," Adams told the group. "It's nice to look out in the audience and see men who are willing to lead and are doing it."

During a luncheon speech, Schlafly explained to the group how the federal court system has expanded its power from interpreting the law to legislating from the bench. Schlafly claimed that the problem with the Supreme Court goes back to a crooked deal made between the state of California and Earl Warren, who, while governor of California, allegedly delivered the Republican vote to Eisenhower in the 1952 election and was rewarded with a seat on the Supreme Court in 1953. Schlafly also expounded on the problems of public education, arguing that schools should "spend more time on prayer than putting on condoms" and claiming that "diversity is a code word for teaching homosexuality in schools." Schlafly finished her speech by encouraging everyone present to "take self-government back from the courts." For those who wanted to know how to proceed, copies of Schlafly's book, The Supremacists, The Tyranny of Judges and How to Stop It, were available at a book signing session after lunch.

Amazingly, a few state legislators made appearances at the conference, illustrating one more time how conspiracy theories can easily slip into the political mainstream. State Sen. Karen Johnson (R-Ariz.), a former campaign manager for white nationalist commentator and one-time presidential candidate Pat Buchanan, spoke on Arizona's own efforts to combat the SPP. Johnson, who is retiring at the end of this term, told the group that she loves Freedom 21 and has been attending for six years. State Sen. Randy Brogdon (R-Okla.) spoke on how he has worked to stop the Trans-Texas Corridor from crossing Oklahoma's border. Brogdon encouraged the group to "take a stand to protect the freedoms the founding fathers gave us" and reminded the audience: "America is not for sale. America will never be for sale."

What was for sale at Freedom 21 was an expensive program put out by the Free Enterprise Society (FES), which claims that it has determined lawful ways of avoiding intolerable debt and tax burdens. For a not-so-cheap one-time fee of $1,200, plus $50 per month, one can enjoy a lifetime FES membership and receive the FES handbook. Steve Hempfling, the director of the radical tax protest outfit, bragged that he has former judges and elected officials among his firm's membership. Describing the IRS as a "terrorist organization," Hempfling said that paying taxes is voluntary and that citizens waive their Fourth Amendment right to protection against unreasonable search and seizure when they file tax returns. "The income tax, to me, is a big fraud," Hempfling concluded.