Literally on the front lines of the illegal immigration debate, Arizona has seen some of the most violent anti-immigrant rhetoric and conflict in the country. 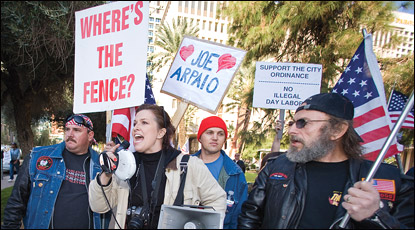 Phoenix has been the scene of increasingly strident anti-immigration rallies and other activism. Sites where day laborers seek work are the latest flashpoint in the nativists' war.

Literally on the front lines of the illegal immigration debate, Arizona has seen some of the most violent anti-immigrant rhetoric and conflict in the country. That has been especially true in recent months as immigrant supporters and armed anti-immigration extremists have faced off in volatile protests at several locations in the Phoenix area where day laborers congregate.

Members of the Northeast Phoenix Neighborhood Action Alliance, a coalition of residents and business owners, said armed Minutemen protesting a day labor center in the Palomino neighborhood are frightening homeowners and driving away customers. "They are bringing terror to the neighborhood," said the group's president, Keenan Strand, at a news conference in January.

One local resident, Maria Smith, reported that when she stopped by the Macehualli Work Center to pray for immigrant families, a man wearing a jacket with the insignia of the American Freedom Riders, a nativist extremist biker gang, called her a prostitute and threatened to shoot her.

Even more heated confrontations have taken place outside M.D. Pruitt's furniture store. Two years ago, when Home Depot stopped allowing day laborers to solicit work outside its Thomas Road store, the jornaleros moved further up the street to a spot near Pruitt's. Last fall, the store's owner asked Maricopa County Sheriff Joe Arpaio for help and began hiring off-duty sheriff's deputies to patrol the store's parking lot and arrest the day laborers for trespassing. That prompted pro-immigrant activists to hold a series of weekend protests outside the furniture store last November. Those events in turn attracted the attention of radical counter-demonstrators from nativist extremist groups such as the American Freedom Riders, Mothers Against Illegal Aliens, Border Guardians, various Minutemen factions and the Patriots Border Alliance. The migrant supporters brought mariachis to their side of the street; the extremists brought bullhorns and pistols to the other.

Joining the anti-immigrant protests were a number of white supremacists including Scott Hume, the acting leader of the Phoenix chapter of the neo-Nazi National Socialist Movement, and Damon Ashenfelter, who on his MySpace Web profile laments "the decline of the white race and the downfall of American society by the hands of mongrels and their general thought process."

Last December, Arpaio — never one to shy away from an opportunity to garner attention — announced he would be dispatching on-duty deputies to the furniture store protests as well. And, unlike Phoenix police, who are prevented from inquiring about immigration status, Arpaio's officers would be checking papers.

"This weekend, I will increase the number of deputies to patrol the Pruitt's area, and I promise that my deputies will arrest all violators of the state and federal immigration laws," announced Arpaio. "I will not give up. All the activists must stop their protests before I stop enforcing the law in that area."

The next weekend, Maricopa County deputies arrested more than 100 undocumented immigrants pulled over on traffic stops. Several arrests were made at the furniture store protests as well. Daniel Pochoda, legal director of Arizona's American Civil Liberties Union, was arrested, handcuffed and taken to jail for trespassing by parking his car in the Pruitt's parking lot.

A truce was brokered in early January, with the owner of Pruitt's agreeing to stop hiring off-duty police officers if both sides agreed to stop protesting outside his store. But nativist extremists vowed to continue similar protests in different locations.

"The confrontation has now become essentially a do-or-die situation for both sides, with implications far beyond illegal day labor," American Freedom Riders founder Danny Smith wrote in a message to supporters. "This is no longer a mere skirmish, it is a major battle which we can not afford to lose. We have succeeded in taking it to a national level of visibility, and now there is no turning back — WE MUST WIN."