It was shocking enough when an unstable skinhead was acquitted of murdering an unarmed woman. Now he's bragging about it 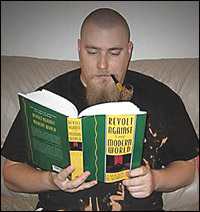 Even for a fascist killer, Hardy Lloyd has a lot of rules. The "Daily Code of a Fascist" section of his sprawling website issues decrees on dress ("A Fascist should wear black all the time!"), diet ("A Fascist eats lots of organic fruits and vegetables!"), calculating weight and distance ("A Fascist uses the Metric System!"), and everyday conversation ("The Fascist shall greet all Comrades with one of the following: 1) Freedom! 2) Hail Victory or Sieg Heil 3) Greetings, Comrade(s) … A Fascist shall refer to non-Fascists in one of the following ways: 1) Infidel 2) Non-Fascist 3) Enemy").

Lloyd, an unstable, 30-year-old racist skinhead and former Pennsylvania leader of the violent neo-Nazi group World Church of the Creator, goes on to encourage cohorts to always carry a weapon, and to never fight fair. "Stab your enemy in the back, or kick him when he, or she, is down," he exhorts. "Do not have sympathy for the enemy, but have only utter contempt."

There's no shortage of delusional grandiosity in Lloyd's bloodthirsty screeds. "I'm the next generation of Aryan thought," he proclaims. "I am the beginning of the final stage of evolution. I am what we should all be!" But then, a firm grasp of his own significance in the world has never been one of Lloyd's strong points. Neither has his sense of morality.

He was kicked out of the World Church of the Creator after being involuntarily committed to a psychiatric hospital in 2003. The following year he began referring to himself as "the doctor of all hate" and promoting himself as the leader of the so-called "Order of National Socialism," whose motto was "Wake up and Kill Someone." Today, he's admonishing his comrades to be as violent and vicious as possible. "Women and children can also be your enemy," he writes. "Do not shy away from hitting or killing a woman or child!"

Hardy Lloyd practices what he preaches. Until 2004, it was tempting to write him off as a loathsome character with extremely unpleasant views. But then he killed a woman. He did it, Lloyd now says, "just to watch her die."

The victim was Lori Hann, a 41-year-old divorced legal secretary who met Lloyd through an Internet dating service. Lloyd shot her in the temple on Aug. 3, 2004, and she died on the porch of a stranger's home in the Pittsburgh neighborhood of Squirrel Hill.

According to homicide investigators, Lloyd said at first that he shot Hann as she was running away from him after a heated argument between the two of them in Hann's car. But then he changed his story, claiming that Hann had threatened him with a handgun before they both exited the vehicle and that he fired in self-defense when she whirled toward him moments later. He said he mistakenly believed the gun was still in her hand, when it was actually still in her car.

Lloyd spent more than two years in jail awaiting a murder trial in which prosecutors argued that Hann pulled over because she was terrified and that Lloyd shot her in cold blood as she was running for help. But the prosecutors didn't convince the jury, which acquitted Lloyd of first-degree murder as well as voluntary manslaughter, finding him guilty only of carrying a firearm without a license. Jurors apparently believed that Lloyd reasonably assumed that Hann was armed.

After he was freed last November, Lloyd launched what is probably yet another one-man organization, "Universal Fascism," whose stated goal is to "promote open and violent revolt against the Americans, the JEWS, the Economic Elite of the world, and Monotheism!" No longer strictly a white supremacist, Lloyd informed the Intelligence Report in a recent E-mail exchange that he is now dedicated to fostering "inter-racial cooperation between Fascists" across the globe. "I have associates in Japan, Turkey, the UK and Ireland, all over Europe, Mexico, America, Canada, Panama, Columbia, Chile, Brazil and Argentina," he claimed.

He also has a taste for the macabre. Last December, a month after starting up his latest group, Lloyd began posting song lyrics to his website in which he taunts Hann's family and gloats about getting away with murder. One of his songs, a take on rapper Ice-T's controversial 1992 single, "Cop Killer," is titled "B---- Killer."

In his version of Johnny Cash's legendary "Folsom Prison Blues," Lloyd adds, "I shot that b---- in Squirrel Hill, just to watch her die."

Hann's family has declined to discuss the case with reporters.

Lloyd claimed in one of his E-mails to the Report that he suspected Hann was a secret agent. "She was an employ [sic] of the Pentagon, and was keeping files on people, and then sending them to an FBI agent!!" he wrote. "Also, she confessed to being a spy. … What I did was morally and ideologically right and just!! I killed a government agent of an evil and tyrannical order!"

That has a better ring to it, after all, than, "I gunned down a frightened, unarmed woman."