Around America, racist toughs have been flooding into the world of mixed martial arts. Now, one of them is rising to the top 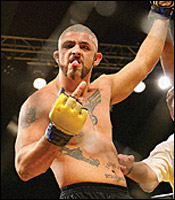 Melvin Costa has become one of the highest ranked King of the Cage fighters in America. He is also a white nationalist with a body inked with Nazi symbols.

Melvin "Man-o-war" Costa has a classic Nazi eagle and swastika insignia tattooed across his chest and a prison gang spider web inked on his right elbow.

Costa, 26, also is a convicted felon, self-avowed white nationalist and currently the 10th-ranked light heavyweight fighter in King of the Cage, one of the most popular semi-professional "mixed martial arts" (MMA) combat leagues in America. MMA is the fastest growing sport in the country. Television ratings for its preeminent league, the Ultimate Fighting Championship, or UFC, routinely outdraw every other sport except NFL football among men aged 18-34.

Not surprisingly, this rapidly rising blood sport is likewise wildly popular among racist skinheads and other young extremists with a thirst for violence. Many white supremacist online forums have recently established discussion groups devoted specifically to MMA; skinhead gangs across the country are raising money by hosting illegal backyard tournaments; and retired white supremacist cage fighter Mike Buell runs a major MMA training school in Arizona whose logo is a Celtic cross (often used as a white supremacist symbol) and the phrase "Hail Victory" (the German equivalent is "sieg heil").

Costa, however, is the first openly white nationalist MMA fighter to become a Top Ten-ranked competitor in a sanctioned organization like King of the Cage, which is a proving ground for up-and-coming fighters, a select few of whom go on to fame and fortune in the Ultimate Fighting Championship.

"A swastika, as far as I hold it true to my own, it stands for the purity of my people's blood," Costa told leading MMA sportswriter Sam Caplan last October. "I do believe in the purity, security, and the survival of the white race. … When I come down that [fighter entrance] ramp and people see me, they know I'm white power." Costa did clarify, however, that he considers himself a white nationalist rather than a neo-Nazi because "[a] neo-Nazi holds Hitler's beliefs to be true down to a T. I don't. I believe in Hitler's point of view as far as racial consonance but I don't believe a lot of [his] things as far as controlling the economy."

By Costa's own account, he was frequently incarcerated for burglary and assault from the time he was 15 until his most recent release from prison in March 2006. His first King of the Cage fight occurred the following April. Costa knocked out his opponent at 1:06 into the first round.

"I don't feel pain. No f-----' brain, no pain!" he said then. Over the next six months he reeled off three successive knockout victories. Southern California skinheads in full dress — boots, suspenders, bomber jackets — began showing up at King of the Cage events in droves to cheer on the Aryan warrior, whose swastika tattoo, outspoken white nationalist ideology and growing skinhead fan base presented MMA promoters with a public relations dilemma.

Last Oct. 18, shortly after Costa's comments and pictures of his tattoos were republished widely on MMA fan websites, Gary Shaw, the live events president of the parent company that owns King of the Cage, issued this statement: "I try not to allow anyone to fight in the cage or the ring that has anything inappropriate either on their gear or tattooed permanently on their body. And that means either ethnic, or racial, or anything offensive to the general public. I was unaware of the situation but I'm in the process of handling it now. Hopefully, it will never happen again."

But it did, less than two months later. Costa fought in a King of the Cage event held last Dec. 18. For the first time, though, he lost. Davis, for his part, did not return two E-mails seeking clarification on his league's regulation of fighters with "inappropriate" tattoos.

Judging by online forum discussions, Costa's growing legions of white supremacist fans seemed far less concerned with his swastika or spider web tattoos than a third tattoo, circling his navel, that boasts, "I have a small penis." The common theory is that, as one fan said, "He might be going for a bit of sarcasm, depending on the actual size of his penis, given the false stereotype about us."

Be that as it may, Costa says, "At least God blessed me with a strong jaw and a big head."