Hate Groups on the Move, Some to Unlikely Places 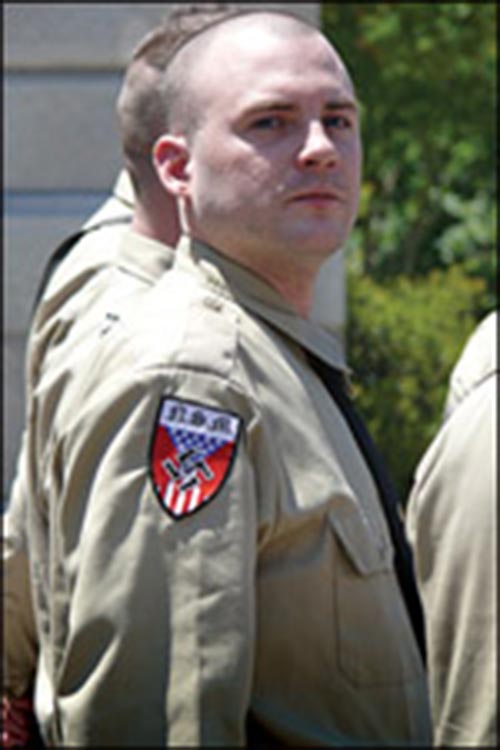 The National Socialist Movement has a fondness for faux Nazi wear that has drawn ridicule from others on the radical right.

Last December, the National Socialist Movement (NSM), currently the largest neo-Nazi group in the country, announced that it was relocating its national headquarters and business operations from the Minneapolis area, the NSM's base of operations since it was founded in 1974, to Detroit, a city with a population of close to 1 million people — nearly 90% of whom are non-white. (Minneapolis, by comparison, is only 18% non-white.)

While the uniform-wearing NSM was active in Michigan in 2007, holding rallies in Lansing and Grand Rapids and distributing literature in several counties, it had previously steered clear of Detroit, a city with largely black leadership. But according to a recent press release confirming the move, NSM leader Jeff Schoep now resides in Detroit, where he is "aggressively strengthening the organization with mandatory leadership requirements including mandatory training seminars."

Also last December, the Church of Jesus Christ Christian, the religious alter ego of the neo-Nazi Aryan Nations, held an organizational meeting at a community center in Longview, a small (pop. 35,000), predominantly white (90%) city in southwestern Washington after announcing its intention to open a new branch there. While 400-500 anti-racist protesters held a simultaneous pro-diversity rally, about 30 skinheads and other neo-Nazis attended the racist gathering, which featured hate rock bands, a reading of poetry based on Viking mythology, and a video about the "myth of 9/11."

Earlier, Longview Mayor Dennis Weber recommended to the City Council that it form a task force to make it clear to the Aryan Nations that "the group is not welcome to the city."