A racist murderer says he acted after reading a hate website. The site, based in Estonia, is run by a longtime American neo-Nazi

After civil rights pioneer Rosa Parks died in October 2005, she became the first woman and the second African American ever to lie in state in the U.S. Capitol Rotunda, a place of honor usually reserved for presidents and war heroes. More than 50,000 people waited long hours in line to pay their respects to the woman who started the Montgomery Bus Boycott of 1955-56.

Many of them may recall being accosted by a gaunt-faced white man with stringy hair, wearing horn-rimmed glasses, one eye pressed to the viewfinder of a video camera, recording their surprise and anger as he spoke ill of the dead. "Rosa Parks was a shitskin communist," he said. "I'm here to celebrate her death."

Though in his mid-50s, Craig Cobb was like a child spouting vulgarities, relishing the shocked faces of the grown-ups around him. Sparking outrage is a favorite pastime for Cobb, a longtime neo-Nazi activist videographer who runs Podblanc, a white supremacist video-sharing website that's fast becoming an online institution for the white nationalist movement. It's modeled after YouTube, which Cobb refers to as "Jew Tube" because its operators censor racist and anti-Semitic content.

Podblanc has more than 1,000 channels, each of them directed by a different registered user. The content includes combat handgun training, homemade explosives how-to guides, and a complete audio recording of the infamous race-war fantasy novel, The Turner Diaries. One Podblanc video details the security measures at three synagogues in northern California.

The most popular video on the site shows Russian neo-Nazis beheading and shooting Asiatic immigrants. Also popular are montages of skinheads in Russia and eastern European countries punching, kicking and stomping orthodox Jews and non-whites. The victims appear to be selected at random as they ride subways and walk down public streets. In one video, a skinhead wielding a log crushes the head of an African immigrant, obviously killing the man. The faces of the attackers are blurred to protect their identities.

Deadly Inspiration
Since Cobb, an American who divides his time between this country and a house he owns in Estonia, founded Podblanc in April 2007, the site (which is registered in Estonia) has developed a considerable following. The number of registered users online at any given time — 100 to 200 during business hours in U.S. time zones, about twice as many at night — is dwarfed by that enjoyed by white nationalist website Stormfront, where the content is considerably toned down by comparison, but it is still sizeable in the world of hate sites. 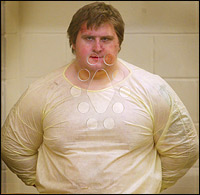 Although Stormfront has far more guests viewing its content, it was one of Podblanc's anonymous lurkers who made the news earlier this year by translating the site's violence-glorifying propaganda into real-world tragedy. Keith Luke, a mentally disturbed young man in Brockton, Mass., allegedly shot to death two black immigrants from Cape Verde and sexually assaulted and attempted to murder a third because, he said, he was "fighting for the white race." Luke, 22, said he'd developed his views in large part from watching videos on Podblanc, according to police. His plan, he said, was to kill as many non-whites as possible and then burst into the weekly bingo night at a local Orthodox synagogue with guns blazing.

Had he not allegedly raped one of his victims (which Podblanc users condemned for the interracial "sex" involved, not for the brutal violence), Luke might have earned his own Podblanc tribute video, similar to those Cobb has created to honor "lone wolf" spree killers like Benjamin Nathaniel Smith. In July 1999, Smith, a prominent member of the neo-Nazi World Church of the Creator, went on a three-day shooting rampage targeting Jews and non-whites. He killed two people and wounded nine before committing suicide. 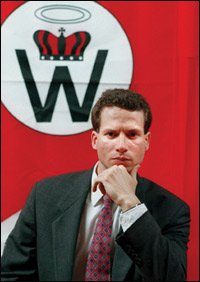 Cobb himself was a quite vocal member of the World Church of the Creator until its virtual collapse following leader Matt Hale's January 2003 arrest for soliciting the murder of U.S. District Judge Joan Lefkow after Lefkow ruled against the WCOTC and Hale in a trademark dispute. Hale was eventually convicted and sentenced to 40 years in prison.

In retaliation, Cobb distributed Lefkow's home address and a map to the location on the Internet. In 2005, a man seeking vengeance on Lefkow in a matter unrelated to the WCOTC case broke into her home and murdered her husband and mother.

Soon after Hale's incarceration, Cobb, who's originally from Missouri, turned up in Pocahontas County, W.V., where he operated a small grocery store in the town of Frost, not far from the rural headquarters of the National Alliance, another major neo-Nazi organization. Cobb attended the National Alliance's invitation-only "leadership conference" at its Hillsboro compound in October 2003. As a shopkeeper, though, Cobb was a bit of a flop. He painted the sides of his store with the website addresses of hate groups, opened for business just an hour or two a day, and pushed white supremacist literature on his customers.

Since at least 2004, Cobb has been a prolific distributor of The Aryan Alternative, a white supremacist periodical that's written by Alex Linder, founder of the Vanguard News Network, and published by former White Patriot Party leader Glenn Miller. Podblanc videos document Cobb distributing The Aryan Alternative in at least a dozen states, plus the District of Columbia. They show Cobb traveling in cars packed roof-high with bundles. He dons latex gloves to avoid leaving fingerprints before meticulously folding thousands of copies one-by-one into square newsprint projectiles he tosses into driveways and presses into the hands of unsuspecting passersby.

Sometimes, Cobb distributes in white neighborhoods, from working class to wealthy. At others, he travels in minority neighborhoods, stirring up trouble more than recruiting for the movement. One video shows Cobb fleeing down a residential street in Hawaii as enraged native Hawaiians charge his car and smash its windows with iron rods. It's titled, "Fun With Pineapple N------/Shoulda Brought a Gun."

Instructing Extremism
On some distribution missions, Cobb travels with Todd Vanbiber, a former National Alliance member and suspected bank robber who was badly injured in April 1997, when one of 14 pipe bombs he was building in a storage unit in Orlando, Fla., exploded in his face. Vanbiber pleaded guilty to weapons and explosives charges in the late 1990s and was sentenced to more than six years in prison. 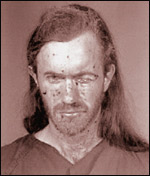 Podblanc might have saved Vanbiber a lot of pain and a little prison time. Cobb's video site offers a host of pipe bomb-making videos, along with instructional videos for homemade flamethrowers, videos ticking off recipes for explosives like Thermite, and short films detailing sniper assassination tactics. They complement hundreds of videos promoting black-on-white crime hysteria, anti-Jewish conspiracy theories, bogus immigrant-bashing statistics and other typical white supremacist fare. One nerve-rattling series displays Cobb's talking head superimposed on a pulsating 1960s kaleidoscopic backdrop as he drones on about the Holocaust being a hoax.

Cobb's talky to a fault. When Secret Service agents interrupted his heckling of mourners outside the Rosa Parks ceremony, he mouthed off until they identified themselves as federal agents. Then he apologized. "I'm garrulous. I'm sorry," he said. "I probably wouldn't have been so cavalier if I'd known you were Secret Service."

At a neo-Nazi rally in Kingston, N.J., later that year, Cobb antagonized non-white counter-protesters until carloads of them shouting threats began pursuing the taxi cab he occupied. The cabbie was mortified. "Man, you can't just say things like that and not expect people to respond," he said.

But then Cobb is not only expecting a response — he's begging for one, one he can put up on Podblanc for the world to see.