The National Alliance, once a neo-Nazi powerhouse, has become the object of ridicule. It's also home to a wide array of criminals

When National Alliance (NA) chairman Erich Gliebe appeared on a list of extremists banned from entering the United Kingdom that was released earlier this year, the online white supremacist world was abuzz with ridicule. It was the first time that Gliebe's name, or that of his deeply troubled and increasingly criminal-infested organization, had surfaced in recent memory.

The consensus among neo-Nazis and other racists posting to a variety of online forums was that the Home Office (roughly the U.K. equivalent of the State Department) had wildly overrepresented Gliebe's clout by listing him in the company of suspected Muslim jihadists and more accomplished U.S. extremists, like radio shock jock Michael Savage and Don Black, a former Klan leader and founder of the dominant racist online forum Stormfront.

According to his many critics on the radical right, Gliebe, a 46-year-old former boxer, has almost single-handedly wrecked what was once America's most influential white supremacist organization. Today, the number of dues-paying National Alliance members is well under 100 — down from more than 1,400 in 2002. Outside of a 2007 Holocaust denial conference, the group has not held any major events or published any significant propaganda in years. The NA headquarters compound in West Virginia is seldom visited by anyone except two part-time staffers who come in a couple of times a week to fill book orders and answer correspondence. Gliebe, who lives in Cleveland, has not been there in months. The buildings are said to be run-down, and the grounds overgrown with weeds.

Meanwhile, Gliebe's personal life is equally in disarray. He separated from his wife and moved back home with his mother in July 2008, then filed for divorce last December. Earlier this year, Gliebe was taunted online for living in his mom's basement and trying to run what is left of the Alliance from a computer at the local library, since his elderly immigrant mother does not have an Internet connection.

An E-mail circulating in response to reports of the Alliance chairman's U.K. travel ban joked that Gliebe was "so broke he couldn't travel to London, Kentucky, let alone London, England."

On the Skids
If Gliebe could scrape together enough gas money for a drive to Kentucky, he would find what could very well be the last public sign in America of the National Alliance's shrinking presence. 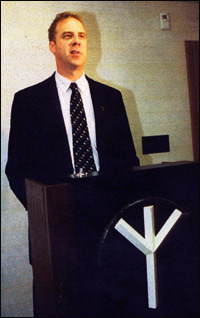 In May, the state of Kentucky ordered the removal of a small metal road sign that a local NA member had arranged for the state highway department to install in exchange for members picking up trash along a section of roadway. After consulting with attorneys, however, state officials reconsidered this decision and, for now, the sign remains.

By comparison, at the height of its power, the National Alliance had sufficient funds to purchase advertising space on billboards and buses all over the country. The inflammatory content of those advertisements generated headlines from Las Vegas to St. Louis to Tampa, Fla. Today, all of those billboards are gone, along with the members who paid for them.

Similarly, the National Alliance once could afford to purchase airtime for a weekly radio address that was broadcast on half a dozen powerful AM radio stations across America. The group also bought airtime each week for its worldwide shortwave radio broadcast of "American Dissident Voices" (ADV).

Today, there are no radio stations carrying the NA message and no global shortwave broadcasts. Instead, once a week, Gliebe drives to a friend's house in Parma, Ohio, where he reads and records his notoriously dull, 10-to-15 minute ADV monologues, which are then "broadcast" on the NA website.

Crime and Punishment
Although the National Alliance under Erich Gliebe is smaller, has far less money and is dramatically less effective in promoting racist ideology, there is growing evidence the group is nevertheless attracting an increasingly volatile and violent criminal class into its ranks.

Since the July 2002 death of Alliance founder and longtime leader William Pierce, Alliance members and former members have been charged with a number of serious violent crimes, including kidnapping, armed robbery, aggravated assault and at least seven murders. They include:

The Alliance Today
In addition to the prominent NA members who have been arrested or convicted of committing serious crimes since he took over the organization, Gliebe has recently promoted into positions of authority within the organization several NA members with criminal records and histories of violence that predate the death of William Pierce. They include:

At one time, the National Alliance had billboards in several cities, including this one advertising its National Vanguard magazine in Tampa, Fla.

From a public safety perspective, the good news is that infighting, corruption and incompetence seem to be causing what's left of the National Alliance to gradually fall apart. The downside is that while the NA no longer publishes books or generates much income or attention, it's become a magnet for outcasts, convicts and sociopaths, many of whom, like Gliebe, have been almost universally rejected by the established white supremacist subculture.

The era of polite, well-dressed young men circulating National Alliance literature at gun shows and other public events is long gone and shows no signs of coming back. It's been replaced by the era of skinhead thugs, career criminals and spastic violence, apparently operating with little top-down leadership. More unstable than ever before, the NA is also more dangerous. It has little left to lose.