Critics of Cynthia McKinney may dismiss her as a loose cannon and a rabble-rouser, but to her supporters, the former Georgia congresswoman is someone with the courage to challenge convention and speak the truth. McKinney, 54, represented an Atlanta-area district as a Democrat from 1993-2003 and 2005-07. A vigorous critic of President George W. Bush, she gave voice to a theory, widely circulated on the political fringes, that Bush knew in advance of the Sept. 11 attacks but allowed them to happen because they would prove profitable to the global investment firm his father was associated with. In her final term, she introduced bills to impeach Bush, Vice President Dick Cheney and Secretary of State Condoleezza Rice.

An advocate of peace and international human rights, she opposed the first Gulf War in 1991 while still a state legislator, and was an early and vocal critic of the Iraq war as well. In Congress, she was a rarity in American politics for her willingness to criticize Israel's treatment of Palestinians. Along the way, however, she has given off hints that her distaste for Israel's policies contained elements of anti-Semitism — and that has caused her trouble. She was defeated in the 2002 Democratic primary by an opponent who drew financial backing from supporters of Israel and opponents of McKinney's radical statements. The night before the primary, her father, a Georgia state legislator, declared on Atlanta television that "Jews have bought everybody. Jews. J-E-W-S." 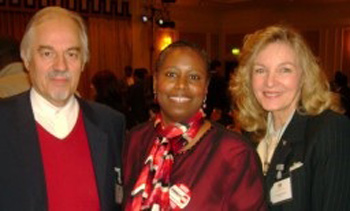 McKinney returned to Congress two years later for one more eventful term before being bounced by voters yet again in the 2006 primary. (In August 2009, she said that "Zionists" were "successful in kicking me out of Congress two times.") She quit the Democratic Party in 2007. But for all her baggage, she remains respected in certain quarters as an effective progressive voice. In fact, the left-liberal Green Party picked her as its presidential candidate in 2008.

That the Green Party chose McKinney was no big surprise, because she and the Greens see eye to eye on many issues. In particular, McKinney's critical view of Israel and sympathy for the Palestinians is in line with a platform adopted by the Green Party in 2004. The platform rejects "[t]he U.S.' unbalanced financial and military support of Israel while Israel occupies Palestinian lands." It upholds the right of Palestinian refugees who were displaced when Israel was created in 1948 to return to their homes. It calls for a withdrawal by Israel to its 1967 boundaries and a "complete dismantling of the Israeli separation wall in the occupied West Bank."

In her antagonism toward Israel, however, McKinney may be taking the Green Party further than it cares to go. In March of this year, she attended a conference in London on the Gaza crisis organized by a foundation established by Mahathir Mohamad, who was prime minister of Malaysia from 1981 to 2003 and has a long history of anti-Jewish rhetoric. In a 1970 book, Mahathir wrote that "Jewish stinginess and financial wizardry gained them financial control of Europe" and that Jews "are not merely hook-nosed, but understand money instinctively." In a 2003 speech at an international summit of Islamic leaders, he said: "Today, the Jews rule the world by proxy. They get others to fight and die for them. They invented socialism, communism, human rights and democracy to avoid persecution and gain … control of the most powerful countries."

McKinney commented about the London conference in two postings on the Green Party's website in which she praised Mahathir ("one of my heroes") and also a man named David Pidcock, whom she called "my London friend." A British-born convert to Islam, Pidcock is the author of an extensive collection of conspiracy-laden anti-Semitic works, including the 1992 work Satanic Voices Ancient & Modern, which blames most of the world's current and ancient problems on a centuries-old conspiracy whose participants include Freemasons, Illuminati, "Luciferian Zionists," the Rockefeller family, big oil companies and the Council on Foreign Relations. The principal Internet outlet for Pidcock's writings is the website iamthewitness.com, which is devoted to fascist and anti-Semitic writings, prominently featuring The International Jew published by Henry Ford.

At the conference, McKinney was photographed with Pidcock and Michele Renouf, a former model and socialite who is considered one of Britain's leading Holocaust-denial activists.

On April 20, McKinney posted another commentary on the Green Party site, this time focusing on the international economy. The essay essentially accused financier George Soros and former Federal Reserve Chairman Alan Greenspan (both of whom are Jewish) of participating in a plot to destabilize the world economy to pave the way for "one-world government." She used a term from a writer named Matthias Chang to describe the principals of this conspiracy — "the Shadow Money-Lenders" — that also is the title of Chang's latest book. She praised the book and quoted from it extensively.

Matthias Chang is a Malaysian lawyer, a Catholic of Chinese ancestry, who served as an adviser to former Prime Minister Mahathir and remains his close associate. In The Shadow Money-Lenders, Chang avoids the rhetorical excesses of the less subtle Jew-haters. But his description of the financial conspiracy is well salted with names of various Jewish bankers past and present (Kuhn, Loeb, Warburg, and so on). Chang's sentiments were clearer in 2006, when he submitted remarks to be read to a "Free Speech" conference in Washington, D.C., organized jointly by The Barnes Review and American Free Press.

The Barnes Review, whose website homepage promotes Chang's books, is a journal specializing in Holocaust denial started in 1994 by long-time white supremacist and anti-Semite Willis Carto; the American Free Press, which began publishing in 2001, was also started by Carto and specializes in anti-Semitic material and conspiracy theories. Chang was unable to attend in person, so his remarks were read by Michael Collins Piper, a writer and contributor to the American Free Press whose main claim to fame is his theory that Israeli spies were behind the assassination of President John F. Kennedy.

Chang's remarks, which are posted on his website, included a shout-out to a remarkable group of haters, Holocaust deniers and conspiracy theorists: "American Free Press, The Barnes Review, The Spotlight, and the truth seekers that I have long admired, Harry Elmer Barnes, Willis Carto, Michael Collins Piper, Christopher Petherick [and] Eustace Mullins (whose life-long persecution by the Police State is a disgrace to the Constitution)." Some of those names are more familiar than others, but take Mullins, for example. Among his writings over the years are declarations that Jews are literally descended from Satan and that they "drink the blood of an innocent gentile child" in religious ceremonies.

Are Matthias Chang's views in line with the U.S. Green Party's positions? Yes, many of them are, said Scott McLarty, the party's media coordinator. "We're very critical of the power of banks and their manipulation of the international economy."

But McLarty said it is unfair and simply wrong to assume that McKinney agrees with Chang, Mahathir or Pidcock across the board just because she quotes them or praises some of their ideas. "This is a guilt-by-association accusation," McLarty said. "It would be like accusing anyone who said nice things about or associated with Henry Ford of anti-Semitism."

Nor does Chang's phrase "shadow money-lenders" necessarily equate to Jews, McLarty said, and an "assumed equation of banks with Jews is also fallacious — banks are run by people of many different ethnicities. Wealth trumps religion, race and nationality."

McKinney's April 20 essay on the Green Party site is enthusiastic in its praise for Chang, and it, too, makes reference to bankers and financiers past and present — George Soros, Alan Greenspan, the Rothschilds — who are Jews or of Jewish descent. McLarty said he would relay to McKinney a request for an interview to discuss this directly, but she did not respond.

The U.S. Green Party held its 2009 annual national meeting in late July in Durham, N.C. McKinney, scheduled as a featured speaker, was unable to attend in person but she spoke briefly via a video hookup from California, where she now lives. Perhaps mindful that she had drawn some criticism for some of the company she had been keeping, she offered a standard disavowal of anti-Semitism. "Judaism is not Zionism," she said. "Zionism is a political trick being played on a lot of people."

About 80 party members of the Green Party listened, politely applauding when she said American policy needs to "restrict money for the Israeli killing machine."

The sparse turnout served as a reminder that the Green Party faces an uphill fight in its effort to become a factor in American politics. The party might have made a breakthrough in 2000, when Ralph Nader drew almost 3 million votes for president, far more than any Green candidate before or since. Instead, many liberals blamed Nader and the Greens for swinging the electoral vote in Florida and New Hampshire to Bush, and held the Green Party at least partly responsible for all that followed. Nader further damaged the party with his flagrant lack of remorse, souring voters who might otherwise have been receptive to the Green Party's program of peace, environmentalism and international cooperation.

Last Nov. 4, McKinney and the Green Party were on the ballot in 31 states and the District of Columbia. She got just 161,000 votes, slightly more than one-tenth of 1% of the total, and did not affect the outcome of the general election; three other minor-party candidates finished ahead of her. But McKinney does seem to have one thing in common with Nader: In the months since the election, she may have followed his course of inflicting political damage on the Green Party.