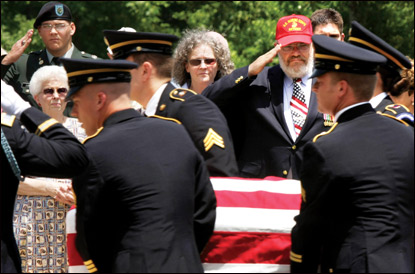 A 23-year-old gunman angered by the deaths of Muslims in Iraq and Afghanistan opened fire outside a military recruiting center on June 1, killing one soldier and seriously wounding another, according to law enforcement authorities in Little Rock, Ark.

Police said that Abdulhakim Mujahid Muhammad pulled up in a black SUV outside the Army-Navy Career Center in a strip mall while Army recruiters William Long, 24, and Quinton Ezeagwula, 18, were outside smoking. Muhammad allegedly fired at least 30 rounds from a Russian-made SKS assault rifle from inside his vehicle. 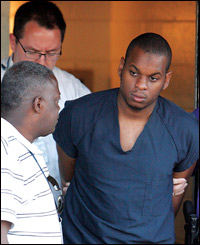 Witnesses told police that Long fell, fatally wounded, on the spot. Ezeagwula, bleeding from a head wound, crawled to cover as the black SUV sped away. Muhammad was apprehended on a highway 15 minutes later. Police found the SKS in his vehicle, along with a handgun, a .22-caliber rifle and hundreds of rounds of ammunition.

Muhammad, previously known as Carlos Bledsoe, is a U.S. citizen who converted to Islam as a teenager. Federal records show that he traveled to Yemen in September 2007 and lived in the port city of Aden after obtaining a work visa to teach English. In November 2008 he was arrested for overstaying his visa, and he was deported through the American Embassy in Sana, the Yemeni capital, on Jan. 29, 2009.

Muhammad had lived in Memphis and Nashville before moving to Little Rock a few weeks before the shootings.

In a jailhouse telephone interview a week after his arrest, Muhammad told The Associated Press that his actions were justified because the U.S. military has targeted Muslims in the Middle East.

"If there had been more recruits out there at the time he would have killed more of them, or tried to," Pulaski County prosecutor Larry Jegley told the Arkansas Democrat-Gazette. "It’s my understanding that after his conversion to Islam he decided that he had a bone to pick with the military officers because of what he perceived to be mistreatment of Muslims around world."

Muhammad was charged with first-degree murder, first-degree attempted murder and 15 counts of committing a terrorist act, the latter counts resulting from the gunfire at a busy shopping center. He is being held without bail.

Prosecutors said they intend to seek the death penalty.