The hard core of the anti-immigration movement is growing

Midway through last year, Jim Gilchrist, one of the principal architects of the modern nativist movement, sounded like a man burdened with regret.

"In retrospect, had I seen this, had I had a crystal ball to see what is going to happen… . Am I happy? No," Gilchrist told the Orange County Register last June 25. "Am I happy at the outcome of this whole movement? I am very, very sad, very disappointed."

"There's all kinds of organizations that have spawned from the Minuteman Project and I have to say, some of the people who have gotten into this movement have sinister intentions," Gilchrist said. 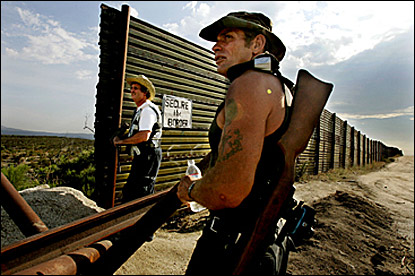 Jim Gilchrist was right. Even as the total number of anti-immigration groups has remained more or less the same in recent years, the number of extremist groups within the nativist movement has continued to climb. According to a count by the Southern Poverty Law Center, the number of "nativist extremist" groups in the U.S. rose from 144 in 2007 to 173 last year — a 20% increase.

Organizations identified by the Intelligence Report as nativist extremist are groups that go after people, not policy. Rather than limiting themselves to advocating within the mainstream political process for tighter border security, stricter immigration controls or tougher enforcement of immigration laws already on the books, these fringe outfits target and confront immigrants as individuals.

Nativist extremist groups do not, however, present a unified front. Like other movements on the radical right, theirs is rife with infighting, ego clashes and allegations of fraud leveled by former allies. "I get more hate mail from members of my own movement, the so-called Minutemen, than from the open-border people," Gilchrist told The New Republic last August. He complained about "troublemakers with personality disorders and criminal propensities" hijacking the cause.

Gilchrist was embroiled in controversy and court battles last year after Minuteman Project board members accused him of misappropriating more than $400,000 in donations. His organization lost five chapters. Meanwhile, the Minuteman Civil Defense Corps, a spin-off group led by Simcox, more than doubled its number of chapters from 34 to 78, establishing itself as the largest and most geographically widespread Minuteman organization in the country. This rise occurred despite persistent allegations of fundraising improprieties leveled against Simcox by former MCDC national officers and state chapter leaders, along with a marked drop in actual border operations conducted by the MCDC.

Many other growing nativist extremist groups — most notably the Federal Immigration Reform and Enforcement Coalition, or FIRE, which increased from two chapters in 2007 to 14 last year — largely steered clear of the border in favor of confronting immigrants with aggressive protests at day labor sites, which are safer, closer to home, and don't require spending hot days or cold nights in the desert.

One exception to this trend was the die-hard nativists stationed in the badlands near Campo, Calif. Since late 2005, the Campo Minutemen and various like-minded groups have maintained a heavily armed, tightly organized presence in a human and drug smuggling hot zone roughly 60 miles southeast of San Diego. Whereas the original Minuteman Project and subsequent made-for-TV civilian border patrol operations were carried out in heavily traveled or populated areas the organizers knew to be shunned by coyotes and drug runners, the Minutemen outside Campo are dug into remote, secretive positions in dangerous territory. The Campo operation is a magnet for the movement's true believers, many of whom feel marginalized by the election of Barack Obama and the trouncing of anti-immigration candidates in last year's elections, perhaps making them more volatile than ever.

"I'd be wary of going down to the border myself these days," Gilchrist told The New Republic. "I'm worried about what [the Minutemen] would do with a sidearm."

Last year ended on a bizarre note for the nativist extremist movement when Shawna Forde, the leader of a small but ambitious group called Minuteman American Defense, reported she'd been the victim of a Dec. 29 home invasion carried out by a trio of Spanish-speaking men who ambushed her in her kitchen, beat her unconscious, sexually assaulted her, slashed the back of her neck with a knife, and then wrote "13" on her floor with a black felt marker. She said the 13 was apparently a reference to the ultra-violent, international Latino street gang Mara Salvatrucha, or MS-13.

Some rival group leaders didn't buy Forde's story, which was under police investigation at press time. First of all, her estranged husband was shot exactly one week earlier in the same home where the reported rape occurred. Then, on Jan. 15, Forde told police a man she couldn't describe had shot her in the arm in an alley two blocks from her home.

"The small scratches she reports via photos on her arms and neck look far too light for any knife attack, much less the work of MS-13," Americans for Legal Immigration head William Gheen wrote in a mass E-mail to his group's members. "Why would MS-13 switch from brutal murder and decapitations to bruises and light scratches that look like they were made with a paper clip? If this story is a hoax and some sort of attention grab, then it could prove highly embarrassing to our movement and cause."