Twin brothers with long histories in the white supremacist movement were arrested this summer for allegedly constructing and sending a mail bomb that blew up in the hands of a black official in Scottsdale, Ariz., in 2004, injuring him and two others.

A federal indictment charges Dennis and Daniel Mahon, both 59, with conspiracy to damage buildings and property with an explosive.

The brothers were taken into custody in a June 25 raid of their home in Davis Junction, Ill. Agents from the U.S. Bureau of Alcohol, Tobacco, Firearms & Explosives (ATF) and the U.S. Postal Inspection Service carried out a search, which yielded assault rifles, bulletproof vests, two improvised explosive devices and a large assortment of white supremacist literature and other racist paraphernalia.

A taping of the Mahon brothers' conversation inside a law enforcement vehicle shortly after their arrest revealed Dennis Mahon saying that if authorities had arrived at 3 a.m. instead of 6 a.m. they would have needed body bags. "We should have had a shootout," he said. Daniel Mahon agreed.

In a simultaneous raid, federal agents searched the Kosciusko County, Ind., home of White Aryan Resistance (WAR) founder and former Klan leader Tom Metzger. The Mahon brothers are longtime supporters of WAR, and the federal indictment accuses them of carrying out the mail bombing to "promote racial discord" on behalf of Metzger's organization. 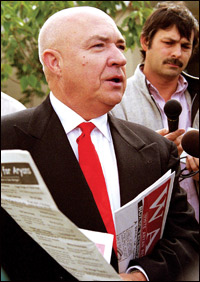 A third raid by federal agents that day turned up more than a dozen firearms, along with blasting caps, gunpowder and fuses, at the rural McDonald County, Mo., property of yet another longtime white supremacist organizer, Robert Joos.

Joos was not charged with participating in the 2004 bombing, but was held without bond on federal weapons charges, including one for being a felon in possession of firearms. According to prosecutors, Joos' property has long served as a training ground for underground white supremacists. They also alleged that the first phone call one of the Mahons made after the bomb detonated was to Joos.

On Aug. 11, a federal judge reversed an Illinois federal magistrate's order to release Daniel Mahon on a $50,000 cash bond. "No conditions of release would reasonably ensure the safety of the community," U.S. District Judge David Campbell wrote. "Daniel has described himself as a domestic terrorist and has espoused views against not only minority groups but the government generally."

Campbell's ruling came on the same day that Don Logan, the Scottsdale city diversity director who was injured in the bombing, addressed the court and Daniel Mahon.

"This individual represents hate, and that hate is a danger to the community," Logan said. "That someone would come to Arizona and launch an attack simply because my skin color is different from theirs, simply because of hate … is unconscionable."