Even as many celebrated, the election of America's first black president provoked a furious backlash from some angry whites

Barack Obama campaign volunteer Kaylon Johnson was one of the millions of people around the world who celebrated the historic election of the nation's first African-American president. He even opened a shop to sell Obama memorabilia in Shreveport, La., where he lives. But then Johnson learned better than most that racists were anything but euphoric over the president-elect.

Nearly a month after the election, on the night of Dec. 6, Johnson, 33, pulled into a Shreveport gas station behind the wheel of his GMC Yukon adorned with Obama bumper stickers. Wearing an Obama T-shirt, Johnson purchased a soft drink and was returning to his vehicle when he was jumped by three white men shouting "F--- Obama!" and "N----- president!" The pummeling left Johnson with a broken nose and a fractured eye socket that required surgery.

The attack on Johnson was just one of what likely was hundreds of racially charged incidents around the United States related to Obama's campaign and ultimate victory. Some may qualify as hate crimes, others as offensive pranks and protests. Many involved students — from grade school through college. The incidents began in the days leading up to the Nov. 4 election. A sampling:

A life-sized likeness of Obama was found hanging from a noose in a tree at the University of Kentucky.

The co-owner of a Palm Beach, Fla., restaurant wrote "White Power" on staff memos taped to the eatery's kitchen walls. She told her black employees they would be fired if they voted for Obama. 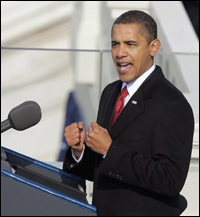 Even as Barack Obama spoke of the need for the country to pull together, some Americans were doing their best to tear it apart.

The incidents continued on the night of the election. A black Muslim teenager in Staten Island, N.Y., said he was assaulted by four white men who yelled "Obama." That same restaurant owner in Palm Beach wrote "KKK" on employee timecards. After newspaper reports of her behavior, she blamed her actions on "watching too much Fox News" and "my hot Italian blood."

The day after Obama's victory, rhetoric about history, healing and hope soared. But so did racial rancor.

In Snellville, Ga., a boy on a school bus told a 9-year-old girl that he hoped Obama would be assassinated. That night, also in Snellville, a vandalized Obama sign and two pizza boxes filled with human feces were left on a black family's lawn. Small black effigies were found hanging from nooses in trees in two Maine towns. In Midland, Mich., a pistol-packing member of the Knights of the Ku Klux Klan wore his Klan uniform and carried an American flag on a city sidewalk.

"Obama" was spray-painted on a black man's car, which was then torched, in Otter Creek Township, Pa. Racist graffiti and an apparent reference to Obama's win were spray-painted on a high school gym and at a local skate park in Kilgore, Texas. At North Carolina State University, four students spray-painted racist and threatening graffiti aimed at Obama, sparking an anti-racist rally attended by 500 people.

In the following days and weeks, reports of incidents continued to pour in. Among them:

Only hours after Obama's election, a predominantly black church in Springfield, Mass., was torched. Three white men were arrested just days before Obama's Jan. 20 inauguration and charged with conspiring to deprive church congregants of their civil rights. 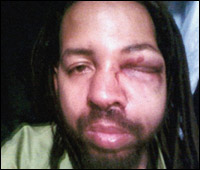 A sign was placed inside a general store in Standish, Maine, that read, "Osama Obama Shotgun Pool." Customers could sign up to bet $1 on a date when the new president would be assassinated. "Stabbing, shooting, roadside bombs, they all count," the sign said. At the bottom of the sign somebody had written, "Let's hope someone wins."

An employee of a gun-and-lock shop in Traverse City, Mich., flew the American flag upside down because, he said, it symbolized "an international signal for distress and we feel our country is in distress because the n----- got it."

The husband-and-wife owners of a motel in Huntsville, Ark., replaced the American flag flying outside their inn with a Confederate battle flag, saying they did so not because of Obama's race, but rather to protest voters' decision to put a "Marxist in the White House."

A dark-skinned doll labeled "Obama" was hung in a high-school stairwell east of Tacoma, Wash. Five students were expelled.

A biracial student at a high school north of Pittsburgh complained that a teacher's aide said to a student sitting near her that Obama would be killed, that the American flag would be changed to the KFC chicken chain's emblem, and the national anthem would become "Movin' on Up" — the theme song of "The Jeffersons," a sitcom about a black family. The aide also berated her for supporting Obama, the student said. The aide was suspended.

A University of Alabama professor reported that an Obama poster was ripped off her office door. When she put up another one, somebody wrote a death threat against Obama and a racial slur on it.

Federal authorities arrested a Wisconsin man in Brookhaven, Miss., four days before Obama's inauguration for threatening to assassinate Obama in a posting to an Internet site about UFOs and extraterrestrial aliens. Steven Joseph Christopher, 42, allegedly wrote that he "can no longer allow the Jewish parasites to bully their way into making the American people submit to their evil ways."

Neo-Nazi radio show host Hal Turner wrote on his blog that his "inauguration dream" was for somebody to send an explosives-laden aerial unmanned drone or chemical-filled balloons into inaugural crowds. In a follow-up posting, Turner maintained that Obama and congressmen and senators attending the inauguration deserved to die, as did African Americans ("sub-human simians") and liberals ("mentally-ill Whites") in the crowd.

Incidents like these and his own beating go to show "we have a lot of work to do still," said Kaylon Johnson, the Louisiana entrepreneur. Even so, he's not discouraged. He remained elated about the election outcome and the fact that Obama carried his home parish of Shreveport in a state won by John McCain. "We're still on the same high, the same energy level as during the campaign," Johnson said.