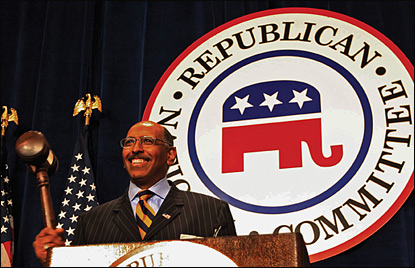 Already reeling from the election of a black president, white supremacists were enraged by the appointment of Michael Steele - "Obama Junior," in the words of David Duke - to chair the Republican National Committee.

Extremists view Steele's ascension to the helm of the GOP as a betrayal by the party that many considered, in their words, "the lesser of two evils." On blogs and online forums, they excoriated the Republican Party for supposedly pandering to minorities.

For now, though, white supremacists are doing more whining than revolutionizing. The Council of Conservative Citizens headlined their anti-Steele screed, "GOP continues shooting bullets into it's [sic] own corpse."

The League of the South, a racist neo-Confederate hate group that has proposed that the South secede anew, blasted Steele for reaching out to moderates in a blog post titled, "New GOP chair to Southerners and conservatives: drop dead." It concluded: "Remind me again why I should vote Republican?"

"Apparently Chairmanship of the Republican National Committee has become another of those positions, like being head of an Ivy League School or Governor of the Federal Reserve, to which white men of Christian heritage Need Not Apply," fumed the writer of the post, Patrick Cleburne.

Perhaps the only bright spot in recent mainstream political events for the anti-immigration sector of the extremist movement came in late January, when outgoing President Bush commuted the lengthy sentences of Jose Compean and Ignacio Ramos, two Border Patrol agents imprisoned for shooting an unarmed, fleeing drug smuggler in the buttocks and then attempting to cover up the episode. Nativists from Lou Dobbs to the vigilante Minutemen groups had demanded their release.

Celebration of the commuted sentences in white supremacist circles was considerably less enthusiastic, considering that both agents are of Latino descent. As "Aryan Warlord" put it in his Jan. 19 post to a Ramos-and-Compean discussion thread on the white nationalist online forum Stormfront: "Okay, so they can't hold authority over whites any more but they get out of prison [for shooting a Mexican]. I can live with that."