After sponsoring several fighters, a California clothing firm with ties to racist skinheads is banned by mixed martial arts leagues

Three major Mixed Martial Arts (MMA) leagues have banned a "street wear" clothing company with ties to the racist skinhead movement. But the California-based company, Hoelzer Reich, continues to make inroads into mainstream youth culture by providing money and free garments to at least some professional MMA fighters and motorcycle racers. These athletes then wear the clothes, much of which displays Nazi imagery, in public appearances and in merchandise such as posters and screen savers.

Hoelzer Reich's enlistment of fighters is troubling because of MMA's skyrocketing popularity with young men aged 18-34 — a prized demographic not only for advertisers, but also for white supremacist recruiters. Televised MMA events since 2007 have routinely drawn 3 million to 6 million viewers, beating out NASCAR, Major League Baseball and National Hockey League sporting events in both the 18-34 and 18-49 male categories, according to Nielsen ratings.

Last fall, Wolbank was asked about his association with Hoelzer Reich by Crime Pride, a neo-Nazi magazine published in the Czech Republic. "It's a new clothing line company out of California that sponsors professional cage fighters, motocross riders and our band," Wolbank replied. "Check out their gear, it is very cool!" 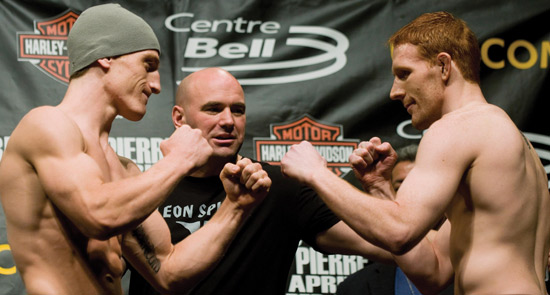 Mac Danzig (left), champion of the sixth season of "The Ultimate Fighter," is one of those who have recently ended sponsorship deals with Hoelzer Reich.

The "gear" produced by Hoelzer Reich consists mainly of T-shirts and hooded sweatshirts in the same black-red-and-white color scheme as the flag of the Nazi Party. They bear a variety of Nazi-era military images, including SS lightning bolts, Totenkopf death's heads, Iron Crosses, swastika-clutching eagles and SS officer rank insignias. Some of the shirts and "hoodies" bear the popular racist skinhead motto "Blood and Honor" (this was also the motto of the Hitler Youth). Others proclaim, in German, "das vierte reich hat begonnen," which translates to "The Fourth Reich has begun." 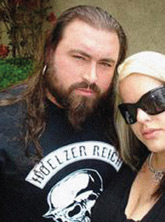 Hoelzer Reich founders Jed and Jamie Vine say they never meant to offend anyone with the Nazi imagery that runs through their clothing. They chose the company's name out of "pride in our German heritage."

"I don't see what the issue is, to be honest," Koger told the Intelligence Report. "I think people just have too much time on their hands and their problem is they read too far into things. Just because there are skulls and iron crosses on some shirts doesn't mean it's racism."

Another well-known athlete sponsored by Hoelzer Reich is Niko Puhakka, a professional MMA fighter since 2002 with numerous neo-Nazi tattoos, including a life rune (a symbol, taken from a medieval Germanic alphabet, that represents the neo-Nazi National Alliance) and "Blood and Honour" (in addition to being the Hitler Youth slogan, the Nazis' 1935 Nuremberg race laws were known by that phrase) splayed across his chest.

The Finnish brawler is just one of at least seven mid- to high-level professional MMA fighters who entered into sponsorship agreements with Hoelzer Reich since the company began recruiting athletes last year.

"We truly enjoy sponsoring MMA fighters and helping them out financially to achieve their dreams … and being involved with their careers," Hoelzer Reich co-owner Jamie Vine stated to Cage Pages, an online MMA publication, last December. 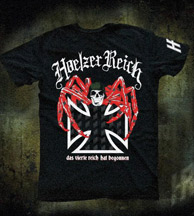 Among its Nazi-themed clothing, the shirt that stands out is marked "das vierte reich hat begonnen" - "the Fourth Reich has begun."

By her own account, Vine founded Hoelzer Reich with her husband, Jed, neither of whom had a previously documented history of involvement in the skinhead movement. "Hoelzer," she said, was Jed's great-great-grandfather's name, and they chose "Reich" out of "pride in our German heritage."

In March 2008, the Report revealed that rising numbers of racist skinheads were participating in organized MMA training and, in a handful of cases, fighting at a professional level. Following the publication of that article, Dana White, president of the premiere MMA leagues Ultimate Fighting Championships (UFC) and World Extreme Cagefighting (WEC), declared a "zero tolerance policy" toward "any and all skinheads and other white power racialists" competing in either the UFC or the WEC. (The WEC focuses on lighter weight classes, the UFC on fighters 155 pounds and above.) In a subsequent letter to the Report, White reiterated his firm position: "There's no place in our sport—none—for that kind of bigotry and idiocy."

Despite the zero tolerance policy, a Hoelzer Reich-sponsored fighter, Joe Brammer, appeared on national television wearing a Hoelzer-Reich T-shirt, replete with Iron Crosses and death's heads, last December in the season finale of the hugely popular reality TV show "The Ultimate Fighter." The show, which pits aspiring MMA fighters against one another in weekly elimination fights, is produced in direct cooperation with the UFC, one of the leagues overseen by White. UFC champions serve as coaches on the show and White periodically appears on the program. Among the contestants, the last man standing is awarded a six-figure UFC contract.

Brammer and his entourage wore the Hoelzer Reich gear for his weigh-in, a media event, and during his "walkout," the pre-fight ritual in which the cameras focus on the fighter and his crew as they make their way from backstage to the octagon. (Brammer has never publicly expressed white supremacist views).

Almost 4 million viewers watched. Brammer lost the fight, but his defeat did nothing to dampen the fast-burning controversy among the online MMA fan community sparked by his walkout apparel.

"If Brammer wants to wear this shirt down Main St., he is free to do so. The First Amendment guarantees him that right. But free speech does not mean consequence-free speech," said Yahoo! Sports MMA writer Maggie Hendricks. "Fighters shouldn't be able to wear shirts into the Octagon (and make sponsor money from broadcasts) that promote something so hurtful and offensive." 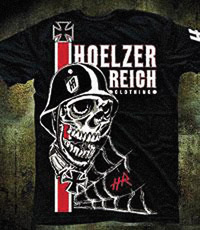 Attempting damage control, Hoelzer Reich posted this defense to several MMA forums: "The imagery and symbols used in our clothing line were chosen and referenced from several German and Prussian Military themes, based on our interest of WW1 and WW2 Germany. … We did not realize that the brief association some of the imagery had with Nazi Germany over 70 years ago would still be so sensitive to so many people. The bottom line is: we NEVER meant to offend ANYONE. We do not support the Neo Nazi ‘cause,' nor do we promote any racist ideologies."

Incredulous MMA bloggers pointed out Hoelzer Reich's association with hate rock musician Wolbank as well as its sponsorship of Niko Puhakka, the fighter with the neo-Nazi tattoos.

The fallout was immediate. First, one of Hoelzer Reich's best-known fighters, undefeated (14-0) Lyle "Fancypants" Beerbohm, severed ties with the company. "I'm no longer being sponsored by Hoelzer Reich, and I want to apologize to my fans," he announced online.

Next, Zuffa LLC, the parent company of both the Ultimate Fighting Championships and World Extreme Cagefighting, announced that fighters and their support staff were banned from wearing Hoelzer Reich clothing at weigh-ins, for walkouts, in the octagon during fights, or at any other UFC or WEC-affiliated public appearances.

Zuffa's banning of Hoelzer Reich had a punishing effect. The following day, Strikeforce, the third largest MMA league after those owned by Zuffa, issued a similar ban. "We will not permit our fighters to wear this type of apparel in our cage," said Strikeforce director of communications Mike Afromowitz.

Along with Puhakka, MMA fighters who are still sponsored by Hoelzer Reich, according to the company, include: Jesse Newell, Justin "Punisher" Pennington and Marcus Sursa. Other than Puhakka, none of the Hoelzer Reich fighters have identified themselves as white supremacists.

"Hoelzer Reich's defenders … say that the clothing only promotes German-American pride, and as a German-American, that offends me more than anything," said MMA sportswriter Hendricks. "I am proud to be German, and live in a traditionally German area of Chicago. We are all able to show our pride in Deutschland without paying homage to such a dark part of history."

David Holthouse is a former Intelligence Report staff writer and free-lancer based in Alaska.