Unfortunately for law enforcement, self-described "sovereign citizens" don't come with a warning label. In the past, most sovereigns were white supremacists organized into small groups that typically all used the same "private" license plate instead of legal tags. Today, while that is sometimes still true, the ideology of the sovereign citizen movement has spread to the point where adherents hail from any race and are found throughout the nation. And they do not all necessarily carry fake license plates or bear other obvious markers. Still, there are common traits that law enforcement officers can and should be on the alert for. They include:

License plates with oddball names like the "Kingdom of Heaven" and the "Little Shell Pembina Band," which is a fake Indian tribe that runs a redemption scam. The FBI has a brochure available for all law enforcement agencies that includes pictures of a variety of sovereign plates. 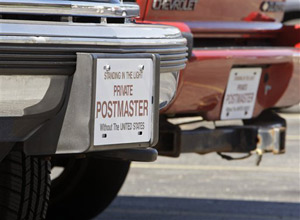 Two vehicles with no registered license plates are parked outside an apartment complex in Columbus, Ohio.

Unusual use of outdated language.A simple question like, "Where are you headed?" may get you a response along the lines of,"I am a free man, traveling upon the land."

An arrogant or belligerent attitude. Sovereigns believe that they have secret knowledge about a complex government conspiracy that most Americans, including law enforcement officials, are too stupid to comprehend.

Anti-Federal Reserve or banking comments, even though all you are discussing is a driver's license, registration tags or traffic infractions. Anger towards other government agencies such as FEMA, the EPA, the U.S. Post Office and the Census Bureau is common.

The absence of a zip code in adherents' addresses (sometimes, the zip code is present, but placed in brackets).