One of the most prominent nativist extremist groups in the nation disbanded this spring, five turbulent years after its birth at a highly publicized civilian border watch in Arizona.

The breakup of the Minuteman Civil Defense Corps (MCDC), the biggest of several groups whose volunteers have conducted armed border patrols in recent years, is the latest sign of trouble within the faltering Minuteman movement. In a March 22 E-mail to supporters, then-MCDC President Carmen Mercer said the group's board had decided to dissolve MCDC in part because it did not want to take legal responsibility for the actions of its fired-up volunteers. Though the group will no longer exist as a corporation, she said that individual MCDC chapters may continue to operate and urged supporters to carry on the group's work independently. "I predict Americans, on their own, will lock, load and do what the feckless cowards in Washington refuse to do — and frankly I hope Americans do take up arms to defend this great nation," she wrote in an "urgent alert." 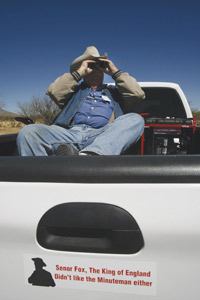 Indeed, an April 5 E-mail from Mercer asserted that "the death of the Minuteman Civil Defense Corps is greatly exaggerated." The message named several Minuteman station and regional leaders who plan to carry on the group's mission and to set up a national umbrella group with a website.

MCDC is an offshoot of the Minuteman Project, a month-long volunteer border patrol operation held in spring 2005 that brought hundreds of anti-immigration activists to the U.S.-Mexico border, along with a few neo-Nazis from the National Alliance. During a March 2005 news conference with Mexican President Vicente Fox, then-President George W. Bush called the Minutemen "vigilantes" and said he favored "enforcing the law in a rational way." But by then a movement had taken hold; other Minuteman groups and imitators emerged from the original Minuteman Project, now a California-based organization run by founder Jim Gilchrist. Many of the Minuteman volunteers who monitor the border also subscribe to the "Aztlan" or "reconquista" conspiracy theory that the Mexican government is trying to reconquer the American Southwest by encouraging illegal immigration (and possibly ultimately resorting to force of arms).

Family Feuds
Almost since their inception, MCDC and the larger Minuteman movement have been plagued by infighting, allegations of financial impropriety and civil litigation. (Mercer herself is a defendant in a lawsuit, filed last summer by the Arizona attorney general, that alleges she controlled a post office box used for a property tax scam; she said she got the box for a friend and denied knowing about the scam.) In addition, the leader of Minuteman American Defense (MAD) has been charged with the May 2009 murder of a 9-year-old Latina girl and her father during a home invasion in Arivaca, Ariz., setting off furious accusations and counter-accusations within the movement about who had supported the now-jailed MAD President Shawna Forde over the years.

Despite the upheaval, MCDC managed to grow: In 2009, the group had at least 74 chapters in nearly 30 states, more than any other Minuteman spin-off group. In recent media interviews, Mercer claimed, perhaps improbably, that MCDC had about 12,000 members.

The announcement of MCDC's dissolution followed an E-mail Mercer sent a week earlier, in which she urged supporters to bring their rifles to the border to "forcefully engage" the "criminals" who try to cross without documentation. Mercer wrote that she received hundreds of responses to that March 15 E-mail, including some that verged on over-enthusiastic. "It was obvious that many had decided to return to the border who had tired of the sometimes futile watch and observe methods. It showed me that people are not willing to be silenced anymore; it also showed me that people will be less likely to follow the rules of engagement in a desperate attempt to stop the criminals who violate our borders every day. That is not what we want and we cannot take the responsibility for this."

But Mercer, a naturalized U.S. citizen who immigrated from Germany, was less than candid when she told the Arizona Daily Star that "people are ready to come locked and loaded, and that's not what we are all about." In fact, the Tombstone, Ariz., restaurateur had repeatedly told supporters in the week-earlier E-mail precisely that — to return to the border "locked and loaded." Mercer would not speak to the Hatewatch blog, which published an earlier version of this report. "I do not think anything I say would make it truthfully on[to] your blog," she wrote in an E-mail. "I have followed the attacks of your organization against our organization. I think you would be wasting my time."

In fact, attacks often came from former supporters within the anti-immigration movement, who heavily criticized MCDC founder and former leader Chris Simcox for failing to complete a promised "Israeli-style" border fence and for allegedly selling out his organization to a shadowy network of professional right-wing fundraisers. The Minuteman PAC, established in December 2005 as the political arm of MCDC, also came under fire for spending only a small fraction of the $1.7 million it raised in 2007-08 to help elect and defeat candidates. (The rest went toward operating expenses, including promotion of the PAC's mission, fundraising and staff salaries.)

In 2007, Simcox fired 18 state, regional and national MCDC leaders because they had raised questions about his financial accountability. Two years later, Simcox quit MCDC himself to run unsuccessfully for Congress, leaving Mercer to run the organization. Since then, other MCDC officials also have resigned, including Vice President Al Garza, who said last summer that he was quitting to launch the Patriots Coalition because "the organization [MCDC] is now on a path that I cannot endorse." Two days after MCDC folded, the Patriots Coalition announced that it would waive the application fee for Minutemen who join the group. Indeed, some ideas of the reinvigorated "Patriot" movement, including antigovernment conspiracy theories, appear to be gaining popularity in Minuteman circles.

Besides liability concerns, Mercer wrote that most of the organization's leaders had left and would not support the more aggressive tactics outlined in her earlier E-mail. In addition, she said MCDC was having trouble raising money after breaking off relations with the Declaration Alliance, a right-wing advocacy group that handled some aspects of MCDC's financial operations. The most recent tax forms show that MCDC received just under $209,000 in revenue during 2008, down from nearly $790,000 in 2007.

"I really think the demise of MCDC has very much more to do with the evaporation of the donations," wrote Border Guardians founder Laine Lawless to a Minuteman E-mail group. "When all the money is gone, the higher-ups leave."

Although the first Minuteman patrol made national headlines, MCDC's collapse has received little media attention outside Arizona. Jim Campbell, who filed a lawsuit (later dropped) against MCDC after donating $100,000 for the border fence, also blames financial mismanagement for the fall of the organization whose mission he still supports. "In the past two years, the movement has gone so downhill," the Air Force veteran told the Intelligence Report. "It almost doesn't make a story anymore. For all intents and purposes, MCDC has been defunct."