A look back at the anti-immigration movement in 2009, a year in which the number of hard-line groups nearly doubled

The relentless demonization of immigrants by hard-line nativist groups was punctuated by murder last year, when the leader of Minuteman American Defense (MAD) and two followers were accused of shooting a Latino man and his 9-year-old daughter to death in Arizona. The crime set off a firestorm of mutual recriminations among nativist leaders — but it did nothing to slow the movement’s growth.

The double murder took place near the town of Arivaca last May, when MAD leader Shawna Forde and two of her confederates allegedly stormed into the man’s house before being driven away by shots fired by his wounded wife, who reportedly later identified Forde as one of her attackers. Officials say that Forde wanted money to finance her group and believed her victims were cash-rich drug dealers.

These horrific murders represent the most egregious behavior by nativist extremists in 2009, a year in which the groups’ in-your-face tactics were repeatedly used against immigrant communities. On the California border, Minutemen armed with rifles, night-vision goggles, thermal-vision scopes and body armor held regular sundown-to-sunup reconnaissance patrols. Minutemen from across the country joined hands with antigovernment “Patriot” extremists in “Operation Spike,” a September border watch event held in Cochise County, Ariz. Day laborers continued to be targeted, as the largest hard-line nativist group, the Federal Immigration Reform and Enforcement (FIRE) Coalition, held regular protests against day laborers, often sending videographers to day laborer centers to intimidate contractors and workers alike. The videos were then posted on anti-immigrant websites. 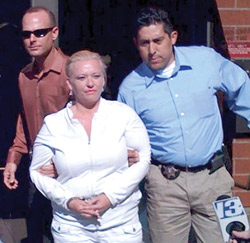 The double murder in Arizona — the horror of which was emphasized by a widely circulated photograph of the smiling 9-year-old victim in a white christening dress — did nothing to dampen a dramatic rise in what the Southern Poverty Law Center (SPLC) lists as “nativist extremist” groups. (These groups do not limit themselves to pushing for more border patrols or tougher enforcement of laws against hiring undocumented workers. Instead, they target individual immigrants with “civilian border patrols” and harassment at day labor hiring centers and the like.) According to the SPLC’s latest count, nativist extremist groups skyrocketed nearly 80% in 2009, rising to 309 from 173 in 2008 and 144 in 2007.

Nativists and Patriots Unite
The dramatic spike in the numbers over the last year is almost entirely accounted for by the rapid growth of the FIRE Coalition, which had only 13 chapters in 2008 and but had expanded by the end of 2009 to 135 chapters in 34 states. Dedicated to ending “the invasion of illegal aliens,” FIRE Coalition activists held aggressive protests across the country, frequently in front of Mexican consulates, and staged other provocative actions targeting day laborers. Run by Jason Mrochek, who has appeared on several national news programs, FIRE took the lead last year in coordinating the activities of the often fractious nativist extremist movement.

Among other things, FIRE launched The Patriot Coalition, an antigovernment outfit battling “globalism,” “socialism” and the “loss of National Identity and Culture.” This was one of several examples last year of formerly single-issue immigration extremists adopting the ideas and conspiracy theories of the antigovernment Patriot movement. Another was seen in the case of Al Garza, who was vice president of the richest Minuteman outfit, Minutemen Civil Defense Corps (MCDC), until he quit the group in August. Garza went on to form the extremely similarly named but organizationally separate Patriots Coalition, another group that merges the ideas of the nativist movement and those of the Patriots.

According to Garza’s website, “Our country has two enemies: Those who want to destroy us from the outside and those who attempt it from within.” The site is also thick with materials supporting “birther” conspiracy theories about President Obama’s citizenship. When it first went up, it featured a digitally altered photograph of a bullet-riddled Air Force One and the caption, “Obama’s first low pass over Texas.” (The image has since disappeared.) It also directed readers to both the angry protests seen earlier this year at so-called “town hall” meetings on health care and, a little later on, the “tea party” tax protests. In September, the Patriots Coalition held its first border-watch event, bringing a reported 45 people to Arizona.

Jeff Schwilk, the foul-mouthed founder of the San Diego Minutemen nativist extremist group, also moved into the Patriot world last spring with an E-mail announcing the formation of the SoCal [for Southern California] Patriot Coalition. Declaring “Revolution is Brewing!”, Schwilk went on to say, “It’s a new beginning, at least for our very strong movement in SoCal, the front lines of the invasion from Mexico and the socialist takeover. … Let’s roll! Let’s take our country back now! Strength in numbers.” A later Schwilk press release said that “Patriotic and Constitutional American grassroots groups” had merged to “fight the growing threats to our region and to the taxpaying American citizens.”

According to Schwilk’s E-mail, the coalition consists of 23 member organizations including the San Diego Minutemen. It is a diverse coalition with tax-protest groups like Stop Taxing Us and the Taxpayer Revolution Committee; several gun rights organizations; eight rogue Minuteman factions, including the Mountain Minutemen, members of which produced a faked video that in approving tones purported to show the murder of a Mexican immigrant by a border vigilante sniper; and two nativist groups long listed as hate groups by the SPLC, Save Our State and the California Coalition for Immigration Reform.

This November, nativist activists moved into yet another precinct of the antigovernment right, trying to steal some of the thunder of the tea-party movement by calling for a series of protests labeled “Tea Parties Against Amnesty and Illegal Immigration.” The events took place around the country and were pushed mainly by Americans for Legal Immigration, MCDC and RightMarch.com. Each was chaired by prominent nativists like Rosanna Pulido of the Federation for American Immigration Reform (FAIR) and Dan Smeriglio of Voice of the People.

Voice of the People has not distinguished itself for sensitivity. Six weeks after the 2008 killing of Mexican immigrant Luis Ramirez by a group of white teenagers in Shenandoah, Penn., the group held a protest there against illegal immigration. (The teens were acquitted of all serious charges by a local all-white jury. But in December, a federal grand jury indicted two of them on charges that could result in life in prison. Three Shenandoah police officers, including the chief, also were indicted on charges of conspiring to obstruct justice in the case.)

Murder and the Minutemen
The Minuteman Project (MMP), which was one of the first large nativist extremist groups when it was formed in 2005, saw its numbers rise from 17 chapters in 2008 to 35 chapters in 2009. This is truly remarkable given that Shawna Forde, who faces a possible death penalty if she is convicted in the double-murder trial now scheduled for early 2011, once served as an official of the group. A true product of the nativist extremist movement, Forde also spent time at the Arizona compound of American Border Patrol, a hate group headed by Glenn Spencer. In 2006, she took part in a televised forum on immigration in her hometown of Yakima, Wash., where she was identified as an official representative of the Federation for American Immigration Reform (FAIR), which is listed by the SPLC as a hate group. (FAIR denies it ever had any connection to Forde.)

The double murder capped longstanding warnings — at least one of them, ironically, from Forde’s former MMP boss — of growing violence and white supremacy in the nativist groups. In 2008, Jim Gilchrist, who created the original Minuteman Project with Chris Simcox and now runs MMP, said he was “very, very sad, very disappointed” at the many people with “sinister intentions” and “Saddam Hussein mentalities” in the various Minuteman splinter groups. “I have found, after four years [that]... I very well may have been fighting for people with less character and less integrity than the ‘open border fanatics’ I have been fighting against. And that is a phenomenal indictment of something I have created.”

Forde’s arrest ignited a new round of infighting on the nativist scene, which already was riven by turf battles, accusations of theft and dishonesty, and lawsuits. In July, William Gheen, leader of another relatively prominent nativist extremist group, Americans for Legal Immigration PAC (ALIPAC), issued a list of groups to avoid in the wake of the Arivaca double murder. Heading the list was Gilchrist’s MMP. In a note, Gheen explained: “Both Gilchrist and [Glenn] Spencer have been highly negligent in who they have associated themselves and their organizations with by supporting and assisting Shawna Forde long after it was clear to many others that she should be cast out of our movement.”

Spencer’s group fired back a few days later, with office manager Melissa Jaramillo writing an open letter to Gheen. “There must be something wrong with you,” she wrote, adding that Spencer had long shown “hatred” toward Forde.

In December, Gilchrist joined the fray, sending out an E-mail that attacked Gheen, San Diego Minutemen leader Jeff Schwilk, and former Save Our State leader Chelene Nightingale as “grifters posing as patriots,” “incurable racists who limit activist participation to only white persons, bigots” whose “shortsightedness limits their association only to those who will goose-step according to their whim.”

Gheen didn’t waste much time in replying to at least some of those attacking him for his initial criticism. “Is there anyone close enough to Jim Gilchrist to stick a needle full of Thorazine in his arm?” he wrote, among many other things.

As more and more evidence against Forde and her alleged co-conspirators has become public, most of her one-time supporters have fallen silent. But not all of them. Laine Lawless, who heads up a small hate group called Border Guardians and who urged the neo-Nazi National Socialist Movement in a 2006 E-mail to launch a campaign of violence against the undocumented, put up a website devoted to building up support for Forde. Entitled “Justice for Shawna Forde,” Lawless’ site says that “Shawna’s legal team believes in her innocence, and so do we.”

Trouble in Mind
Meanwhile, the Minuteman Civil Defense Corps, which was founded by Chris Simcox after he split with Gilchrist and left the Minuteman Project, lost three chapters in 2009, but still had a substantial 75. It may not do so well next year, as Simcox quit MCDC last May to run for the U.S. Senate from Arizona. At the same time, Simcox angered his fellow Minutemen by moderating his anti-immigrant tone and denouncing other Minutemen leaders who had gone beyond immigration issues to radical ideas like tax resistance, Texas secession and even insurrection.

In late August, MCDC, which was also wracked with infighting over alleged financial improprieties, took another blow when it came to light that Simcox’s replacement as MCDC leader, Carmen Mercer, was being sued by Arizona Attorney General Terry Goddard. Mercer was named in court documents along with the CEO of a California company called Property Tax Review Board Inc. The firm allegedly mailed thousands of deceptively official-looking letters to Arizona homeowners soliciting $189 in return for what it called a “property-tax-assessment-analysis.” Officials say the letters directed recipients to send their payments to a post office box controlled by Mercer.

Despite all of this, the number of nativist extremist groups has continued to grow at a rapid pace. What follows is a state-by-state list of the 309 groups that the Southern Poverty Law Center lists as nativist extremist groups. In the case of three major formations — the Minuteman Civil Defense Corps, the Minuteman Project, and the Federal Immigration Reform and Enforcement Coalition — acronyms have been added to help identify affiliated chapters that use other names.