On Aug. 27, its members marched on Town Hall — a ragtag band, some dressed in ill-fitting military surplus clothing, others in the Oath Keepers’ black and yellow — to boldly proclaim that the red banner of tyranny would not fly in Quartzsite, a town of about 3,800 residents strung along Interstate 10.

“We want to set an example here,” Oath Keepers founder Stewart Rhodes said at the conclusion of a two-mile march. “If every community across the country simply did what’s being done right here — right here, right now — we would restore our republic.”

Then, just as suddenly as they had come, Rhodes and his followers turned on their heels and disappeared, driving off into the sweltering desert.

In many respects, the Oath Keepers’ foray into Quartzsite was a footnote to an already complicated tale of alleged small town corruption. A battle there pitted Police Chief Jeff Gilbert and the Town Council against then-Mayor Ed Foster, several police officers and a handful of citizens — a battle byzantine enough that it’s hard to say, even at this late stage, exactly what happened. What does seem clear is that the Oath Keepers, a group that traffics in conspiracy theories about government plots, were determined to use the controversy for their own ends.

The Quartzsite controversy centered on the claim that Foster, an avuncular former Wrigley’s chewing gum company engineer, had discovered that checks totaling $250,000 were mysteriously being written on the city’s accounts every year. The allegations, which many in the city doubted, prompted several state investigations. 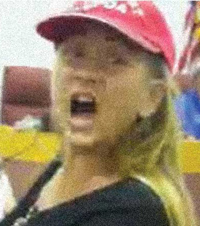 Jennifer Jade Jones, addressing a crowd in the small Arizona town of Quartzsite in August, demanded an investigation into alleged financial chicanery by city officials. She was supported by the antigovernment Oath Keepers, who came to town to participate in a rally.

Patriot circles erupted with cries that the “martial law” that antigovernment extremists have feared for years had finally come. Mayor Foster raised the stakes by saying publicly that indeed, that was just what Chief Gilbert had imposed.

Into that fray stepped the Oath Keepers. On their website, they predicted the world would soon see “the Quartzsite saga to be a vital pivot point on which small-town America shall awaken to the encroachment of corruption and violation of rights from Federal levels downward.”

It’s pretty clear that that did not happen. But one result of the Quartzsite conflict was to give a clearer picture of what the Oath Keepers really represent. Rhodes has angrily rejected characterizations of his group as conspiracy-minded or radical, saying it only asks members to pledge to defend the Constitution (or make that pledge a second time; most Oath Keepers are in the military, law enforcement or are veterans). But they didn’t look that way in Quartzsite.

Marching alongside the Oath Keepers were members of various border militias performing “security.” Some perched on the backs of low-slung pickups with desert tan military-styled rifles propped casually on their laps. That wasn’t all — mingling in the crowd and seeking recruits was at least one member of the Republic for the united States of America, one of the “sovereign citizens” Patriot groups that believes the government has no right to impose most taxes or other laws.

The spirit of the afternoon, in fact, was as much a call for resistance as it was a day to congratulate Foster, Jones and their compatriots for defending their desert outpost from the supposed onslaught of tyranny. There were speeches and music, and barbecue and beer, as about 100 people settled into lawn chairs to share stories of border adventures and government ignominy.

Gilbert, who monitored the afternoon from afar, said the Oath Keepers’ goal was clearly opportunistic, an effort to paint themselves as noble crusaders against the political rot that the chief said existed only in their minds. “The Town of Quartzsite is not corrupt, nor am I,” he told the Intelligence Report by E-mail. “We have been exploited by individuals and groups who have a bigger cause.”

What that cause is has been a matter of dispute.

The group’s core plank and the key element of its website is the “10 Orders We Will Not Obey.” These include orders to put American citizens in prison camps and impose martial law — the very reason the Oath Keepers came to Quartzsite.

Rhodes, in the past, has defended such paranoid fears as mere theoretical worries — worries about, for example, a new version of the internment of Japanese Americans during World War II. But the reality is that all the things the Oath Keepers fear — martial law, foreign troops, the collapse of paper money, the internment of liberty-loving Americans in concentration camps — are longstanding conspiracy theories that are central to the ideology of the Patriot movement. 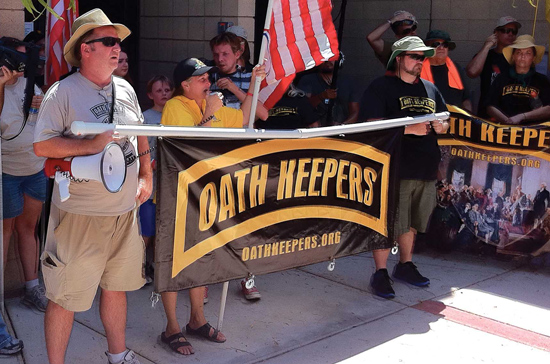 This April 17, for instance, Rhodes described America’s military veterans as a “sleeping giant” who needed to be awakened to save the country. “The hour is late, and our Constitution hangs by a thread,” he wrote. He then went on warn of “the liberty crushing plans of the political and financial elites who intend to use chaos as an excuse to scrap our Constitution and national sovereignty once and for all.” He predicted the crash of the system of “fiat money” — money that is not backed by precious metals — and said that the “coming economic collapse” may be used as a pretext to impose “martial law.” He proposed that state militias be formed capable of “repelling invasions” (he has since made efforts to establish such a militia in his native Montana). He also suggested setting up barter networks and using gold and silver as money. “We must have an alternative to the fiat money in place when it collapses, so we can resist what the globalists have in store for us.”

Be that as it may, it’s unclear what any of that really had to do with Quartzsite. The suggestion that the town had been put under martial law came from the mayor during an emergency meeting held to address Jones’ arrest, and after that Gilbert quickly became a focal point for Patriot ire, with some websites referring to the chief as a “Nazi cop.” But there doesn’t seem to be anything to it.

Gilbert also showed the Report materials, allegedly from one of Jones’ blogs, that went far beyond community muckraking. One unsigned post read: “In the AZ that I remember real citizens carried guns and had the balls to use them. … Take your town back. If they won’t listen to reason, run them out of town, or kill them.”

Gilbert later said that things had grown quieter in Quartzsite. The Oath Keepers had promised to help Jones move, he said, but few stuck around after their rally finished. Jones has since moved herself out of town.

The Oath Keepers, meanwhile, have touted their afternoon as nothing short of a smashing success. “As our Declaration of Independence made clear, the only legitimate purpose of government is to secure our rights, and if one level of government is abusing our rights, it is incumbent on the next level to investigate and to take action to stop the abuse,” Rhodes wrote following the event.

Apparently, the people of Quartzsite don’t agree. A recall election held on Aug. 30 ousted Mayor Foster, who lost his post to former town councilman and Fire Department Capt. Jose Lizarraga. The La Paz County Recorder’s Office counted 289 votes, or 53% of the vote, for Lizarraga, compared to Foster’s 230. Jones, the local gadfly who set off the ruckus and later described the recall outcome as a “nauseating turn of events,” ran as a write-in candidate and garnered just 23 votes.

Said Gilbert: “I hope this is the starting point again.”