Dec. 21
A federal judge in New Jersey sentenced neo-Nazi blogger and shock-jock radio host Harold C. "Hal" Turner to 33 months in prison for using his blog to threaten three federal judges, less the eight months Turner had served while awaiting trial. Still facing Connecticut state charges for threatening officials in 2009, Turner was allowed by a court there to fire his attorney and take on a public defender.

Jan. 14
Kentucky's intermediate appellate court overturned a $1.3 million judgment against Ron Edwards, former imperial wizard of the Imperial Klans of America. The court found insufficient evidence to support a state jury's 2008 conclusion that Edwards bore some responsibility for the 2006 beating by several IKA members of a 16-year-old boy they mistakenly thought was Latino. The Southern Poverty Law Center, which represented the victim, later asked the Kentucky Supreme Court to reinstate the original verdict. 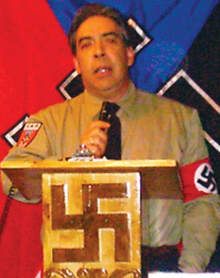 Jan. 26
Jacques Pluss, a former academic who claimed to have infiltrated a neo-Nazi group as part of his research but later turned out to be an enthusiastic supporter, was arrested by New Jersey State Police for sending threatening E-mail messages to Abraham Foxman, national director of the anti-racist Anti-Defamation League. The one-time National Socialist Movement member was charged with intimidation, weapons violations and contempt of court, and released on $25,000 bail.

Mar. 18
A federal jury in North Carolina convicted Bernard von NotHaus, who long sold an alternative currency to members of the antigovernment "Patriot" movement, of manufacturing counterfeit coins with the intent to defraud. Von NotHaus, who faces up to 25 years in prison, advertised his currency as an inflation-proof alternative to U.S. dollars. Federal authorities later moved to confiscate seven tons of coins made of a variety of precious metals and worth an estimated $7 million.

Mar. 25
Samuel Lynn Davis of Idaho pleaded guilty in a Nevada federal courtroom to 31 counts of bank fraud and money laundering, completing the fall of a man who had boasted of not filing a tax return since 1998. Davis, 56, is an antigovernment "sovereign citizen" who hawked the so-called "redemption" scam that claims that participants can get millions from the government by filing certain documents. An elder in the Guardians of the Free Republics, Davis faces up to 20 years in prison on each count when he is sentenced in late June.

Mar. 30
Four South Texans said to be members of the Southern White Soldier Gang — a reputed spinoff of the Aryan Brotherhood prison gang — have been charged in the March 23 murder of a 25-year-old man, believed to be a gang rival. The Hardin County sheriff said that Kenny Don Stanley of Vidor confessed to the shooting, while Kristopher Leigh Guidry of Humble, Tanner Lynn Bourque of Bridge City and Vickie Starks Fitts of Hull admitted to participating.

Apr. 7
Brandon Lee Hall, a member of the Aryan Knights Brotherhood, was sentenced in Atlanta to 30 years in prison for possession of weapons and explosives. Hall was arrested a year earlier with a machete, handguns, black powder ball-bearing rounds, a possible bomb and a map of Austin, Texas. He also had an ominous note that read, "I'll get a chance at being famous."

Apr. 7
Four Hardy, Ark., men were indicted on federal civil rights charges for allegedly tossing a Molotov cocktail into the home of an interracial couple on Jan. 14. If convicted, Jason Barnwell faces up to 85 years in prison, while Gary Dodson, Jake Murphy and Dustin Hammond could receive 70. The couple was unhurt. Court documents describe Dodson and Barnwell as white supremacists.