Old times certainly are not forgotten in some parts of the South. Two private Mississippi academies, set up in 1968 for white children facing the unacceptable (to their parents) prospect of sharing their classrooms with African Americans, are still being enthusiastically funded by white supremacists.

Calhoun Academy in Calhoun City and Carroll Academy in Carrollton have been the beneficiaries of considerable financial support over the past two decades from the Council of Conservative Citizens (CCC), a crudely white supremacist group whose website has referred to blacks as "a retrograde species of humanity" and whose newspaper, Citizens Informer, regularly publishes articles condemning "race mixing" and lamenting the decline of white, European civilization. 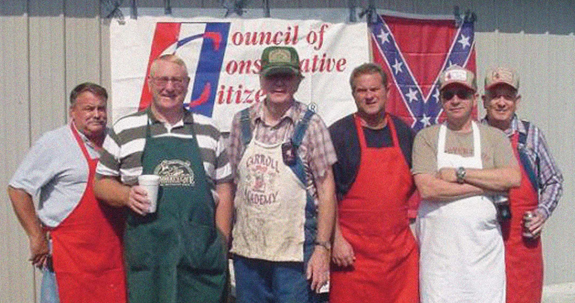 A group of men helping to raise money for Mississippi’s Carroll Academy gather in front of a banner for the white supremacist Council of Conservative Citizens, a school benefactor.

The CCC is the direct descendant of the segregationist White Citizens Councils of the 1950s and 1960s, having been largely built on the earlier councils' mailing lists. The Supreme Court's landmark 1954 decision, Brown v. Board of Education, ordering desegregation of the nation's public schools, sparked the growth of the White Citizens Councils, which declared, "We will not be integrated. We are proud of our white blood and our white heritage of sixty centuries." The councils' first order of business after the court decision was to create private, all-white schools that came to be known as segregation, or seg, academies. By 1975, at least a half million white students had withdrawn from public schools to avoid mandatory desegregation.

Though the academies remain across the South, their days of overtly catering solely to whites have ended. But a minority presence at some schools can be hard to find: The headmaster of Carroll Academy, Steve Flemming, told the Intelligence Report that the school has one non-white student. Calhoun's headmaster, Coach Cameron White, said that his school had four non-white students, some of whom "may have black blood in their families."

The Carroll and Calhoun academies, which both were founded in 1968 and offer classes from kindergarten through high school, are revered by the CCC. The CCC's longtime national field coordinator, Bill Lord, who was president of Carroll Academy for 14 years in the 1980s and 1990s, called them "the miracle of the century." In 2004, Lord wrote in the Citizens Informer that the academies create "an atmosphere free of social experiments" for those who want to "associate with persons of like persuasion," presumably meaning other whites. According to his biographical profile, Lord helped organize both Carroll and Calhoun academies, as well as six others in Arkansas and Tennessee.

The CCC works hard to support the schools, holding barbecue fundraisers that bring in substantial donations. In 1999, for instance, the CCC reported that it had raised over $100,000 for Calhoun Academy. The group also prominently features activities taking place at the academies in its publications. The CCC's April-June 2010 Citizens Informer, for example, ran a photo of the Carroll Academy Lady Rebels basketball team along with congratulations for having won a championship.

In February 2010, Carroll Academy hosted a CCC meeting that featured Jeppi Barbour, brother of Mississippi Gov. Haley Barbour, describing a petition drive for a ballot proposal the would require voters to show ID before voting. Photos show Jeppi Barbour in the academy's library speaking to dozens of CCC members. And the local CCC chapter regularly meets in the school's facilities. In March 2009, the chapter's meeting at the academy featured an unnamed guest speaker who is "one of the top judges in Mississippi, who gave a talk on the need for conservative organizations across the state to offset the liberals that are trying to influence the courts." (In recent years, the CCC has avoided naming public figures who address the group because of the ramifications of speaking to an openly racist group. Most politicians have strenuously avoided the CCC since the late 1990s.) 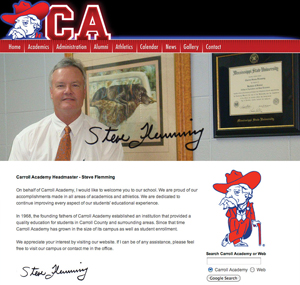 Carroll Academy’s school mascot is Colonel Reb — the same symbol axed by the University of Mississippi because of its evocation of the racist doctrines of the Confederacy.

In line with the CCC's reverence for all symbols of the Old South, Carroll Academy's sports teams are called the Rebels and the school's mascot — featured prominently on its website — is Colonel Reb. (The colonel is identical to the mascot of the University of Mississippi that was axed seven years ago because of its connection to the Confederacy and its racist doctrines.) Several photos of a recent barbecue fundraiser the CCC held for the school are on the academy's website, including two that depict a big CCC banner alongside a Confederate flag.

Calhoun Academy also gets considerable ink in the CCC's newsletter. A picture in April-June Citizens Informer shows a massive barbecue pit full of chicken that was sold to help the school. "Tasty B-B-Q benefits Calhoun Academy," reads the caption. On another page the newsletter notes that the barbecue event brought in over $1,600 for Calhoun, described as a "private school organized by the Council." A 2004 description of another barbecue fundraiser put on by the local CCC chapter said the funds from "the program are used to purchase textbooks and visual aids for the school library." These events have been held for nearly two decades for both schools.

Given the CCC's long relationship with Carroll Academy, it was surprising how unaware headmaster Flemming said he was about the group. He told the Report that CCC members have children in his academy and that the group is "supportive of the school." But he said that he was "not informed" about the nature of the CCC, even though the group regularly meets on his campus. He declined to condemn their racist views, saying that he didn't want "offend anyone" and that "they have their right to feel how they feel." Flemming also told the Report that the parents of his school's one non-white student "have never had a concern" about white supremacists meeting at and helping to fund his academy.

For his part, White, the headmaster at Calhoun Academy, told the Report that the CCC donates only "about $4 a year" to the school, which contradicts the CCC's published accounts of its fundraisers for the school. When asked about the barbecue the group held earlier this year to raise funds for the school, White said his campus receives "no direct donations" and added that he didn't know if the CCC had "assisted in cooking" to benefit the school. When asked about the CCC's views — one of its platform statements is a promise to "oppose all efforts to mix the races of mankind" — White said, "I wouldn't comment on that."

Both academies are accredited members of the Mississippi Association of Independent Schools (MAIS), which includes dozens of private academies in Mississippi, Louisiana and Arkansas. A search of the association's accreditation materials could find no reference to best practices or policies dealing with racism or discrimination. But in a November E-mail to the Report, MAIS Executive Director David Derrick said: "Policies of the Mississippi Association of Independent Schools (MAIS) provide that member schools shall not discriminate in enrollment on the basis of race. Member schools, however, are autonomous in their decisions regarding funding. There are no policies in place that allow for, or require, review of funding sources of member schools."

After the CCC's support for these schools was initially disclosed in October on the Southern Poverty Law Center's Hatewatch blog, two petition campaigns were organized on Change.org to stop racist funding of the academies. By January MAIS had changed its tone, demanding that the schools end their financial relationship with the CCC.