Espousing highbrow “Aryan” ideas, the White Order of Thule (WOT) was a neo-Nazi spiritualist group in the closing years of the 1990s (the name Thule refers to the northernmost habitable regions known to ancient Greek geographers). Founded by imprisoned cocaine dealer Peter Georgacarakos, art student Michael Lujan and new age occultist Joseph Kerrick — eccentrics who considered themselves the intellectual vanguard of the white supremacy movement — WOT required inductees to advance through “degrees of membership,” studying German philosopher Friedrich Nietzsche, Adolf Hitler and others. The group’s belief system promoted “Nietzschean notions of the Superman against Judeo-Christian religion,” as well as the darker sides of paganism, scholar Nicholas Goodrick-Clarke wrote in Black Sun: Aryan Cults, Esoteric Nazism, and the Politics of Identity, a seminal 2003 work on what’s often called “esoteric Nazism.” Among the White Order’s core beliefs was the idea of Aryan superiority as supposedly embodied in Greco-Roman culture. 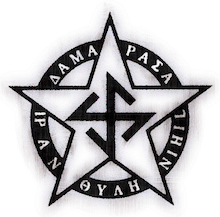 The White Order of Thule’s sigil — a sign or image that is considered magical — was designed by Joseph Kerrick and incorporates a Nazi swastika.

While WOT avoided overt acts of violence in promoting an all-white nation in North America, one of its more prominent members, Leo Felton, went to prison for plotting to bomb Jewish and black landmarks and incite a race war. (After his arrest, to the shock of his comrades and his skinhead girlfriend, it emerged that Felton’s father was black.) Nathan Pett, also known as Nate Zorn, was a member of the group and worked on both of its publications — Crossing the Abyss, a newsletter that claimed to shed “light on the murky area between cutting-edge Aryan pagan spirituality and revolutionary realpolitik,” and another called Fenris Wolf. Today an avowed critic of the white supremacy movement, Pett spoke with the Southern Poverty Law Center about the White Order and his own eventual dismissal of racist ideas.

How would you describe the makeup and identity of the White Order of Thule?
They were a very motley crew of eccentric people that weren’t satisfied or didn’t fit in with [more traditional neo-Nazi groups like] the Hammerskins or the American Front or the National Alliance. It was this pseudo-intellectual group, guys who were smarter than some of the knucklehead skinheads I knew. The group catered to people who felt that they wanted something a little smarter, more professional, and a little bit more elitist. But it was really a prison-run fascist book club, more or less. I say that because most of the members hadn’t met each other.

What were the group’s core beliefs?
The more intellectual people would deny it, but it’s all the same crap [as in less pretentious parts of the white supremacist movement] in hindsight for me.

They would combine theosophy [a mystical religious philosophy founded in the 19th century that also influenced some German Nazis] with pagan beliefs, primarily more Greco-Roman, which is different than most of the other racist groups obsessed with the Nordic thing. They rejected that in favor of this more Mediterranean, right-wing, pagan mindset.

And as you got more into what they called study, you started to find they also dabbled in things like Christian mysticism, but rejected mainstream Christianity and Christian Identity [a racist variant of Christianity that says Jews are biologically descended from Satan and people of color do not have souls] as unsound. Now you might ask, why? They’re all racist and they’re all the same. But they don’t look at it that way. It was an alternative to the other white separatist, white nationalist, white supremacist groups.

Did that thinking draw a large base of followers when the group was most active?
We had a hard time getting a lot of followers because, as you know, the white power movement is very right wing. That goes back to the John Birch Society [that was founded in 1958], very anti-communist. But the White Order would promote things like Stalin as a good leader, and so forth. And that’s why the group never caught on — the white supremacist movement will always be right wing. It will always be anti-communist and xenophobic.

Of course, I always felt bringing leftist philosophy into this was just a front. I don’t really think you can be a neo-Nazi and truly be a leftist thinker or a progressive or a liberal. Instead, it was catering to people that were looking for an alternative religion, people who felt they wanted something supposedly a little smarter. You’re dealing with a con artist, after all. Peter Georgacarakos was the number one con artist you will ever deal with. I mean, let’s face it: the group is a cult. It was about getting people to join and follow the leader, very similar to Jim Jones’ People’s Temple.

A cult? What can you say about that?
It was very much a cult of personality surrounding one man, Georgacarakos. He wanted to be the godhead of this group. It’s kind of why Lujan got tired of it, and why I got tired of it. Overall, he’s a good example of why when you talk about any type of discrimination, whether its discrimination against people because of sexual orientation, or their economic background, or their nationality, or their religion, or race, there’s always a Hitler type that wants to be a figurehead. And that’s Georgacarakos.

The others wanted to follow the leader — Joseph Kerrick was more or less a former hippie, new age kind of cult person. He has been in every new age cult that you can think of. Mike Lujan is another guy. He’s what you call a joiner and followed Charles Manson for years.

Was the group sizeable enough to be divided into chapters?
The chapter thing is funny. Let’s face it — the White Order of Thule had such a small amount of people. The chapter in Virginia was just Michael Lujan and a P.O. box. The same with me in Washington state. I was the only guy there. I had one or two people I knew who I tried to get interested, but it was so bizarre to most white supremacists to do the weird mix of philosophy. Most people just didn’t want to get into it, you know? It was so esoteric. People couldn’t understand what the hell it meant, including me.

So did you feel conned when you left the group?
Something happened when I worked at a fish market in Baton Rouge, near the Louisiana State University campus. Louisiana is a strange place for a white supremacist [because of its multicultural population]. I still don’t understand how David Duke can have so much support.

But this was a big market of about 50 to 100 employees. Everyone was Caucasian, except for a Hispanic woman and a black guy. And here is the ironic thing about that — the guy that I identified with more than anybody else was the black guy. We had a similar sense of humor and we really hit it off, because we were basically forced to have to work together. He was such a good guy that it started to really make me doubt my own beliefs. I actually thought, “If I wasn’t a damn skinhead, this guy would have been a great friend.”

So it’s like living a double life, and I started to get wise to the fact I was being lied to. And that puts a lot of doubt in your mind.