The White House this spring released the president’s “long-form birth certificate” after declining to do so for years. It confirms that Barack Hussein Obama II was born on Aug. 4, 1961, in Honolulu — precisely what the president has been saying for his entire life.

The White House this spring released the president’s “long-form birth certificate” after declining to do so for years. It confirms that Barack Hussein Obama II was born on Aug. 4, 1961, in Honolulu — precisely what the president has been saying for his entire life.

Presented with the very document they’ve been demanding, denizens of the “birther” movement instantly shifted strategy, declaring that the long-form birth certificate was a fraud and developing ever more elaborate interpretations of the meaning of the term “natural born citizen” to insist that Obama is not one.

Orly Taitz, often described as “Queen of the Birthers,” found herself in a yelling match with host Lawrence O’Donnell on MSNBC. Taitz demanded that the camera zoom in on what she claimed was a copy of Obama’s draft records — new proof, she insisted, of a fraudulent presidency — but was quickly silenced by O’Donnell, who was clearly infuriated by her shifting attack. 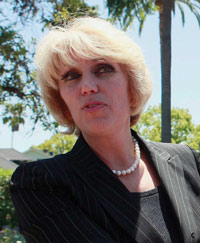 Taitz was rapidly joined by others on the far right.

The Council of Conservative Citizens, a white nationalist group that has described black people as a “retrograde species of humanity,” accused the White House of doctoring Obama’s birth certificate, claiming to have uncovered computer coding that suggests it had been digitally altered. Similarly, over at the far-right WorldNetDaily website, Joseph Farah — who has sponsored billboards with the text “Where’s the birth certificate?” — declared: “It would be a big mistake for everyone to jump to a conclusion now based on the release of this document, which raises as many questions as it answers.”

Right-wing attack dog Jerome Corsi — whose second book questioning Obama’s honesty, Where’s the Birth Certificate? The Case That Barack Obama is not Eligible to be President came out three weeks after the certificate was released — took only a day to regroup. “Obama’s presidency now depends upon the White House being able to support the veracity of all the information contained in the birth document released yesterday morning,” he wrote in WorldNetDaily, publisher of his book.

“I’m going to be telling the entire world about this scandal over the next few weeks, [and] this is going to make Watergate look like a political sideshow in comparison,” Corsi added on May 17, the day his book was finally released, in an interview with right-wing radio host Steve Malzberg. 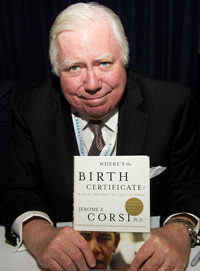 The same day, James Edwards, racist host of the “pro-white” radio program “The Political Cesspool,” congratulated himself for helping Corsi research his screed — a fact that Corsi acknowledged on page 270 of his book. The radio show has hosted an array of Klan and neo-Nazi leaders.

Only New York City real estate mogul and reality TV star Donald Trump, a relative newcomer to the birther game, seemed to take pleasure in the birth certificate’s release. At a news conference held the day the document was released, Trump — then the nation’s most prominent birther — bizarrely claimed that the victory was his. “I’m very proud of myself, because I’ve accomplished something that no one else has been able to accomplish,” he said.