In 1998, the murder of James Byrd Jr. tore open racial wounds in East Texas. Now, controversy is reopening those wounds

Thirteen years ago, one of the most horrific racially motivated murders in U.S. history focused the scrutiny of a shocked nation on this staid East Texas town like sunbeams through a magnifying glass: On June 7, 1998, three white men chained a black man, James Byrd Jr., to their pickup truck by his ankles and dragged him three miles along a remote country road to his death, decapitating him and scattering pieces of his body over 75 locations.

Desperate to stave off a devastating racial explosion — not to mention an international reputation as a hotbed of race hate — black and white residents circled their wagons, spurned interloping agitators including the Ku Klux Klan and the National Black Panther Party, and somehow managed to hold their community together despite East Texas’ long history of strained race relations.

For a while afterward, Jasper almost began to look like a model of reconciliation — a primer on how a determined community could, with patience, perseverance and good will, overcome even the nastiest racial legacy. As a testament to that change, the fence separating the whites-only and blacks-only sides of the Jasper City Cemetery was torn down in 1999, the year after Byrd was buried there. 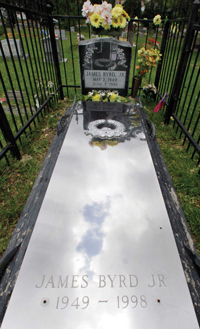 The issue today is the April 22 appointment of the city’s new police chief, Rodney Pearson, a black man. A petition drive to recall three of the black city councilmen who voted for Pearson followed — with nearly all the signatures belonging to white residents.

Each side in the controversy accuses the other of racism: Whites say the black-majority City Council passed over better-qualified white candidates just to name a black man chief, while blacks say whites are angry that black people have the power to pick a chief that whites don’t favor.

“I do not believe this petition is about incompetency, but about four black council members voting to hire a black police chief,” the Rev. Ray Lewis, who is black, declared at a recent City Council meeting. “We can make it be something else but I believe we, all in this building tonight, know the truth of the matter.”

“Was race a factor [in Pearson’s selection]?” attorney Mike Getz, who is white and represents the petitioners seeking the three councilmen’s recall, asked in an Intelligence Report interview. “It appears, if you look at it objectively and subjectively, absolutely. For them to suggest that [Pearson] was the most qualified candidate for the position is absolutely ludicrous.”

Almost certainly, both sides are right: The Jasper City Council majority likely did have race in mind as it selected a black man for the job. But hasn’t race always been a factor in decisions made for years by white-dominated councils that never considered qualified black candidates?

And, by the same token, both sides are wrong: White people in Jasper now resent a situation they never seemed to mind when it favored them. Black people, meanwhile, are defending the kinds of capricious government decisions they long resented when they worked against African Americans.

The controversy may not be unique in a nation undergoing seismic demographic realignments in countless venues, with the non-Hispanic white population expected to fall below 50% by 2050. But this is Jasper, a town thrust by fate into the role of canary in the coalmine of American race relations. How Jasper handles race may tell us something about how America handles race. Certainly, it makes it clear one more time that there is no easy fix when it comes to race in America. Those who dreamed of a “post-racial” America after the 2008 election of the nation’s first black president were doing merely that — dreaming.

A Band-Aid on Race
“Jasper has never healed from James Byrd,” observes Willie Land, one of the four black council members who voted to install Pearson as the city’s new police chief and who is now a target of the recall effort. “Jasper put a Band-Aid on it. This will set us back further than James Byrd.”

The current controversy caught many here by surprise. Even before Lawrence Russell Brewer, John William King and Shawn Allan Berry picked up hitchhiker Byrd and viciously beat and murdered him in 1998, the town was something of an anomaly for East Texas: It had already elected a black mayor, R.C. Horn, despite not being majority black. Since then, coinciding with a slow decline in the white percentage of the population, the City Council has become majority black, though with scarcely a social ripple — that is, until former police chief Todd Hunter stepped down Feb. 1. After that, Jasper’s racial détente quickly unraveled.

On Feb. 14, the five members of the Jasper City Council — Land, Terrya Norsworthy, Joe Clyde Adams and Tommy Adams, all of whom are black, and Randy Sayers, who is white — unanimously appointed as interim police chief Pearson, a 22-year trooper with the Texas Department of Public Safety (DPS) and also Jasper’s volunteer fire chief for four years. No one was more shocked by that decision than police Capt. Gerald Hall, an 18-year department veteran and its second-in-command. By most appearances, Hall had seemed the obvious choice for at least the interim role.

What had happened? Apparently, rumors and suspicions swirling independently in black and white Jasper had risen to hurricane force. Black people in town believed Jasper Mayor Mike Lout, who is white, had privately assured Hall, who also is white, that he would be named interim chief, thereby giving Hall a considerable edge for the permanent position — even though, under the city charter, the mayor has no authority to select or even cast a vote for the police chief. Many black critics cite a Facebook post by Hunter, the former chief, to Hall’s wife Judy, which read: “I recommended him [Hall] to the Mayor and the Mayor told Gerald he was going to be the Interim. Didn’t think I needed to campaign since it looked like it was a done deal.” 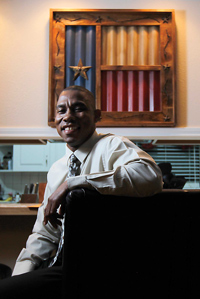 Following the Feb. 14 vote, civil discourse in Jasper seemed to crumble. Lout — perhaps the person in town best positioned to mediate the controversy — instead took sides, publicly declaring his displeasure with Pearson’s selection.

Hall and two other Jasper police officers publicly criticized the City Council’s decision — as their new boss sat listening only steps away. In one council meeting, a local white business owner reportedly made a disparaging remark using the word “n------,” and nearly came to blows with a black resident. The businessman, Ronnie Samples, publicly apologized two days later to defuse a boycott by a handful of protesters outside his store.

Nasty Facebook messages, some written by Jasper police officers, their wives, and local business owners, proliferated. One white businessman, gun shop owner Lance Caraway, who has contracts with the city, wrote, “I’LL SAY IT! STUPID N------!!!” A black resident reported seeing a black dummy hanging by a noose in a white neighbor’s yard, apparently put up by the owner.

The local radio station, KJAS — which Lout owns — obtained a copy of a city-financed background investigation of Pearson that turned up repeated issues with writing bad checks, including a 1990 misdemeanor arrest in Nolan County, Texas, that Pearson initially failed to mention in his application for police chief.

But KJAS didn’t report that Lisa Peterson, the county attorney for Nolan County, told the investigator Pearson and his then-wife were “equally guilty” of writing bad checks, that “[f]ull restitution was finally accomplished,” and that Peterson described Pearson as “good and honorable person.” Pearson, however, also served a five-day suspension from DPS in 1995 for more bad-check problems — problems he had also failed to note on his application. Pearson acknowledges the application omissions, but says they were inadvertent and that he had made an effort to amend the application before the matter went public. “It was a mistake,” Pearson told the Intelligence Report. “I’ve never had the chance to explain that.”

Into the Fire
On April 22, the four black members of the City Council named Pearson, a 19-year resident of Jasper, the permanent chief of police, bypassing Hall and 21 other applicants. (Sayers, the lone white council member, dissented.)

The civic ruckus only intensified. A local ad hoc group called the League of Concerned Citizens launched the petition drive to recall the three black council members eligible for reelection, charging them with “incompetence, misconduct and malfeasance in office” — even though their vote for Pearson was perfectly legal.

One of the recall drive’s proponents, Vickie Stewart, insisted that the issue was the council’s judgment, not the race of the applicants. “None of [the council members] gave any reasoning for their decision other than, they did it,” Stewart, who is white, told the Intelligence Report. 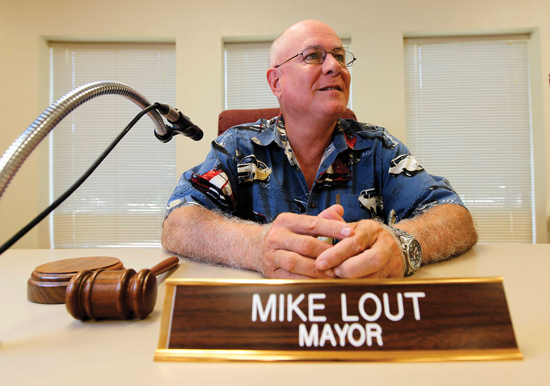 After months of feeling as though they had no counter to Lout’s reports on KJAS, which they considered one-sided, the council majority finally deployed some heavy artillery of their own: Attorney and tough-talking former state Sen. David Bernsen.

One of Bernsen’s first moves was to call a July 27 press conference on the doorsteps of City Hall. “The chief and his wife, Sandra, and their family have quietly endured six months of hurtful, false and shameless allegations,” Bernsen said. “They were hopeful that common sense, community spirit and decency would prevail. It is now apparent that a certain small group of people are more interested in their personal, financial and political gain than they are in telling the truth or seeking the truth.”

Bernsen is helping the black council members challenge the recall effort in court. Meanwhile, five white Jasper police officers and two other candidates for the chief’s position have filed complaints with the U.S. Equal Employment Opportunity Commission, alleging racial discrimination on the part of the council or Pearson.

Of course, even a successful recall of the three targeted Jasper City Council members won’t guarantee that a new panel would fire Pearson. Still, petitioners’ attorney Getz said, the effort serves a purpose. “You can sit and wring your hands and bemoan what’s happening to your city, or you can be active and try to change what you believe are wrongs in your city.”

And the sparring continues: Black Jasper activists in September submitted to the city their own recall petition to remove Lout, the mayor, from office.

Can Jasper survive all the racial self-righteousness and emerge, as it seemed to once before when faced with horrific racial violence, stronger? Communities around the country face a similar question as the population continues to undergo racial change even as the nation struggles to cast off its racist past. In some ways, it’s hard to see how Jasper will prosper. It seems likely that whether Pearson hangs on to his new job or departs, half the city will remain embittered.

As it happens, Lawrence Brewer, one of the three killers of James Byrd Jr., was executed on Sept. 21 by lethal injection at the Texas Department of Criminal Justice facility in Huntsville, 103 miles from where his crime occurred 13 years earlier. (King is appealing a death sentence, and Berry is serving a life sentence.) But the emotional sentence being served by the City of Jasper has yet to be commuted.

Jasper County Sheriff Mitchell Newnan has been distressed to observe local folks who had been friends for years, now at odds with each other.