In what may have been a hate crime committed by assailants who mistook their victims for Muslims, two elderly Sikh men were shot to death while taking their customary afternoon stroll in Elk Grove, Calif. — the latest evidence of what appears to be a year-long rash of anti-Muslim hate.

Surinder Singh, 65, died on the street where he was shot on March 4. His friend, Gurmej Atwal, 78, initially survived two gunshot wounds to the chest, but died of his wounds about six weeks later.

Both men wore the dastars (traditional Sikh turbans) and beards common to men of their faith. Police, who could determine no other motive, suspected the men were victims of a hate crime.

Four months earlier, Harbhajan Singh, a Sikh taxi driver in nearby West Sacramento, was severely beaten in what was determined to be a hate crime. Pedro Antonio Ramirez, 42, and Johnny Morales, 33, were arrested and pleaded no contest to felony assault. The pair and their wives had left a bar and got into Singh's taxi on Nov. 28, called him a Muslim, made references to Osama bin Laden, and assaulted Singh with their fists, leaving him bloodied and suffering from facial and spinal fractures. Ramirez accepted a plea bargain of 13 years in prison; Morales, who played a lesser role in the assault, faced up to a year in jail. 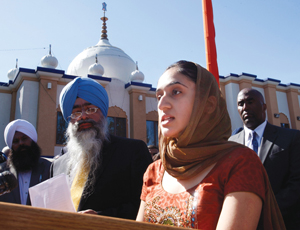 Cut down in California: Navi Kaur remembers her grandfather, Surinder Singh, who was murdered during an afternoon stroll.

Local residents affirmed that Sikhs have often been the target of attacks since 9/11 — even though Sikhs had nothing to do with those attacks. "The turban is a big problem for us," Gurjatinder Singh Randhawa, chief editor of the Sikh newspaper Punjab Mail USA, told the Sacramento Bee. "We look the same as Afghan Taliban — but we are not Taliban."

According to the film documentary "Mistaken Identity: Sikhs in America," there were 295 attacks against Sikhs across the United States in the weeks following 9/11 (when attacks against people believed to be Muslims spiked 1,600%, according to FBI hate crime statistics). The attacks included the murder of Mesa, Ariz., gas station owner Balbir Singh Sodhi on Sept. 15, 2001. Frank Silva Roque, 44, was convicted of first-degree murder in the case. He reportedly told friends and a waitress at a local Applebee's restaurant the day of the 9/11 attacks that he planned to "go out and shoot some towel-heads."