One of the epicenters of anti-abortion extremism seems to be in North Carolina, where the FBI in September arrested Justin Carl Moose, the self-professed "Christian counterpart to Osama bin Laden," for conspiring to bomb an abortion clinic. Moose told a confidential FBI informant he was the organizer of a "phantom cell" for the Army of God, a theoretical group (no real structure is known to exist) composed of those who have attacked abortion providers. He used his Facebook page to issue communiqués, even posting detailed bomb-making instructions free for the taking.

FBI agents in Greensboro, N.C., began investigating Moose in early August after Planned Parenthood contacted them and told them that a man was advocating violence against their clinics. Moose was arrested and agreed to plead guilty in exchange for leniency. He faces 20 years in prison and a maximum fine of $250,000, according to a plea agreement filed last November in federal court. He was to be sentenced in March.

Moose's words to an online sympathizer left little doubt about whether he might follow through with his threats: "As far as I'm concerned, nothing is off limits to stop abortion. Anything and everything goes. I have learned a lot from the muslim [sic] terrorists and have no problem using their tactics." 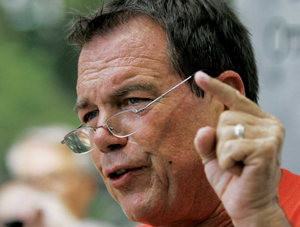 Also in North Carolina, the Rev. Philip "Flip" Benham, director of the Concord-based Operation Save America and a long-time hardliner against abortion, ran into serious legal trouble of his own. In November, the fundamentalist Christian minister was found guilty of stalking a doctor who performs abortions. Benham came to national attention when he began papering neighborhoods with hundreds of Old West-style "Wanted" posters for doctors in Charlotte who perform abortions.

The posters didn't put a price on the doctors' lives, but in the aftermath of Tiller's murder in Kansas, many doctors felt threatened, especially considering the murderous outcome of similar flyers distributed in other states. David Gunn in Florida and George Patterson in Alabama, both doctors, were shot and killed in 1993. Another doctor, John Britton, was murdered a year later in Florida. All were once featured on "wanted" posters.

Meanwhile, investigators have begun looking into whether Tiller's killing was connected to a broad network of radical anti-abortion activists, one of gunman Scott Roeder's former roommates told The Kansas City Star.

Tim Parks, Roeder's friend and former roommate, said he and six others appeared before a grand jury in October for a line of questions focusing on the Bible study group Roeder attended. The group, which met for potlucks and Scripture study, described themselves as Messianic Jews who, unlike mainstream Jews, believe that Jesus was the Messiah and that hastening his return would usher in the end of the world.

In Boulder, Colo., Donald Hertz was sentenced to five years of probation for threatening the family of Dr. Warren Hern, one of only a few physicians nationwide who will perform late-term abortions. Prosecutors said Hertz called a clinic last summer and warned that his "associates" in Utah planned to kill Hern and members of his family. At the time of the threats, Hern was under the protection of U.S. Marshals.