In the last several years, an obscure United Nations accord called Agenda 21 has emerged as something of a unified field theory for the antigovernment movement. On its face, Agenda 21 does nothing but provide countries and communities with a set of principles to grow smartly — a plan, in short, to fight overpopulation, pollution, poverty and resource depletion.

But for a far-flung network of antigovernment extremists who have risen up to attack it, the nonbinding document that was approved 20 years ago at the UN’s Earth Summit in Rio de Janeiro is not really about preserving the planet at all. Between the lines, they argue, lies a blueprint for the “New World Order.”

In his final days on Fox News, Glenn Beck passionately argued that by agreeing to follow Agenda 21, the U.S. government had colluded with internationalists to undermine its own sovereignty and turn the nation into an environmental refuge where nature would take precedence over people. 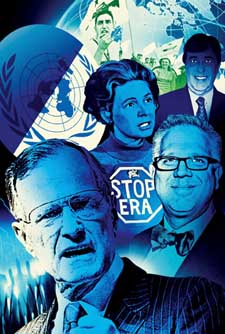 In the years since President George H. W. Bush signed on to a global sustainability program in 1992, a raft of far right activists have warned shrilly of a plot to create an authoritarian one-world government. They include (from top) John Bush of Texans for Accountable Government; Tom DeWeese of the American Policy Center; Phyllis Schlafly of the Eagle Forum; and Internet television host Glenn Beck.

The irony is that Agenda 21 is all about survival. It was intended to offer a strategic plan to scale down the use of natural resources to levels that meet “the needs of the present without compromising the ability of future generations.” (The 21 stands for the 21st century.) One hundred and seventy-eight world leaders, including President George H.W. Bush, signed on to the agreement in 1992.

While there is some opposition to Agenda 21 from the left — from groups like Democrats Against Agenda 21 — it’s on the radical right that the UN plan has become a touchstone of a larger theme that equates environmentalism with totalitarianism and the loss of individual freedom. For a growing cast of far-right hardliners, Agenda 21 is a sort of Trojan horse, a totalitarian scheme with a green environmental mask, lying in wait to destroy America as we know it.

How such an arcane UN document that defines the concept of “smart growth” and environmental sustainability became so controversial, even though it gives the UN no enforcement powers, has a lot to do with the work of a tight cadre of antigovernment “Patriot” activists whose fears are rooted in right-wing lore about a New World Order, a kind of authoritarian one-world government. Figures such as Tom DeWeese, head of the American Policy Center, Phyllis Schlafly, founder of the anti-feminist Eagle Forum, and John Bush, with Texans for Accountable Government, have in recent years crisscrossed the country to put on seminars and conferences that strike terror into those inclined to believe conspiracy theories about powerful global elites plotting to install a socialistic global government. The John Birch Society, an archconservative group formed during the Red Scare of the 1950s, regularly assails Agenda 21 with the fervor it once reserved for communists.

Under Agenda 21, these activists argue, the expansive American way of life, in which everyone can aspire to the dream of owning a house with a big yard and two cars in the driveway, will be replaced by one in which increasing numbers are crammed into urbanized “pack ’em and stack ’em” apartment complexes, and forced to use mass transportation and live according to a collectivist ethos. Once the UN’s radical utopia is achieved, gun ownership will be forbidden and the UN will raise an army intent on terrorizing the populace in the name of social order and equality, sustainability and smart growth — all words that anti-Agenda 21 activists believe signal the true intent of the UN’s plan.

Armed with suspicions and “research,” activists have disrupted meetings from Oklahoma to Ohio, where a Facebook group called Ohio Agenda 21 Watch keeps tabs on “the many socialist groups working in Ohio whose aim is take away our sovereignty and incorporate Ohio into UN control.”

In Edmond, Okla., protesters shut down a community workshop held to gather public input on environmental sustainability. After 20 minutes, police were called to disrupt the melee, and the backlash to the city’s decision to follow Agenda 21 ultimately prompted officials to stop coordinating with the UN. Shannon Entz, a community development manager in Edmond who helped organize the workshop in December 2010, told the Intelligence Report that a group called Govern Edmond Locally had enraged the audience with flyers vilifying the UN.

“I can understand how people, in some cases, may be fearful of government,” Entz said. “[But] where it loses steam is they give cities and government a little too much credit. … We certainly don’t have the money or the political will to hurt, or harm, or take private property [to protect the environment].”

In Colorado, Patriots have fiercely resisted environmental initiatives proposed by the U.S. Forest Service. Some are convinced the UN is cutting off access to national forests to leverage natural treasures against foreign debt, or worse, to build prison camps for U.S. citizens. The Tenth Amendment Center and the Oath Keepers have launched propaganda campaigns to curb the supposed UN advance. Even the League of the South (LOS), a neo-Confederate group that advocates a second Southern succession, has gotten involved. Those attending the grand opening in January of the LOS compound in Wetumpka, Ala., had to wipe their shoes on a UN flag before entering the building.

During a speech in late 2010 to the City Council in Austin, Texas, where he lives, John Bush of Texans for Accountable Government summarized the global plot that these activists believed they have unmasked. He had come to challenge a local resolution designed to make the city more energy efficient.

“Before carbon was thought of as the most evil thing in the world,” Bush said, “there were … internationalists hashing out a plan to further their scheme for world government through the means of excessive environmentalism.”

Experts who study conspiracy theories attribute the rise of Agenda 21 fears to distrust of the UN that existed long before the document was drafted and approved at the Earth Summit. “Any time you get some sort of UN program that suggests any kind of change in the way people live, even if it seems outwardly benign and even voluntary, it’s going to be taken up by people of a conspiracist bent,” Michael Barkun, a political science professor at Syracuse University, told the Report.

The fact is that Americans on the extreme right have harbored wild fears about global control, and the loss of national and local power, for at least a century, going back to the League of Nations and even before. Much more recently, in 1991, President George H.W. Bush deepened suspicions about the designs of global elites when he used the phrase “new world order” during a speech to Congress following the Gulf War — an utterance that, in retrospect, has been interpreted as a revealing slip of the tongue. The signing of Agenda 21 came the next year.

Now, with the resurgence of the Patriot movement since President Obama’s election, Agenda 21 has moved to the top echelon of radical-right fears.

Just as it did with communism, the John Birch Society has done as much or more than any other group on the radical right to drum up panic and outrage. It has held more than a dozen conferences across of the nation in the last six months to sound the alarm. “It boils down to control,” spokesman Bill Hahn told The Missoulian after a protest in Missoula, Mont. “Do we allow an international organization to implement its extreme environmental agenda through innocuous names of sustainability, smart growth, etc., or do we retain the sovereignty that allows us to govern ourselves and decide locally what is best?”

There seems to be an even better question: Is there something real to fear in Agenda 21 — or is it just another bogeyman of the politically paranoid?