Sikh temple killer Wade Michael Page wasn’t the first to develop extremist beliefs in the military. The Pentagon has struggled for decades to keep white supremacists out of the ranks.

If Wisconsin mass murderer Wade Michael Page did indeed develop his extremist beliefs while serving in the U.S. Army — as the evidence strongly suggests — he wouldn’t be the first. Many analysts believe Timothy McVeigh, America’s most infamous domestic terrorist and a veteran of the Gulf War, also became radicalized while in the military. Acting on his rage against the U.S. government, he went on to bomb the federal building in Oklahoma City in 1995, killing 168 people.

Of course, it’s no surprise that, with a force of more than 1.4 million active-duty personnel, some small percentage would harbor extremist beliefs. But because these service members are trained in weaponry and combat techniques — skills highly valued by antigovernment militias and violent white supremacist groups — it’s a particularly thorny problem, one that military officials have grappled with for decades.

An unclassified Intelligence Assessment by the FBI’s Counterterrorism Division in July 2008 pinpointed the potential danger: “The military training veterans bring to the [white supremacist] movement and their potential to pass this training on to others can increase the ability of lone offenders to carry out violence from the movement’s fringes.”

The report could easily have been describing Page, the neo-Nazi skinhead who killed six and wounded four at a Sikh temple in Oak Creek, Wis., last August.

The report added: “[S]ensitive and reliable source reporting indicates supremacist leaders are encouraging followers who lack documented histories of neo-Nazi activity and overt racist insignia such as tattoos to infiltrate the military as ‘ghost skins’ in order to recruit and receive training for the benefit of the extremist movement.” 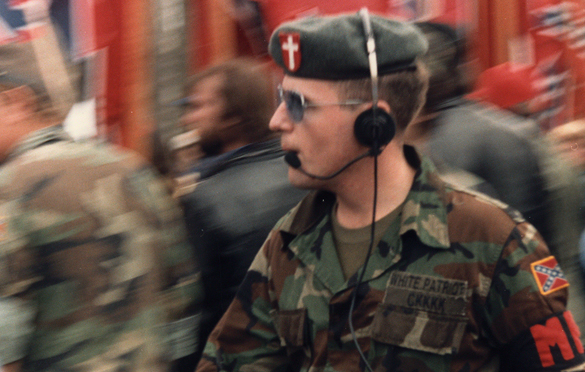 The Department of Homeland Security noted its concern in an April 2009 report on the threat of domestic terrorism, stating that “rightwing extremists will attempt to recruit and radicalize returning veterans in order to exploit their skills and knowledge derived from military training and combat.”

The Department of Defense has been forced to confront the problem several times since the mid-1980s — each time tightening rules designed to weed out neo-Nazis and other extremists.

In 1986, the Southern Poverty Law Center (SPLC, publisher of the Intelligence Report), wrote to Defense Secretary Caspar Weinberger to turn over evidence that active-duty Marines stationed at Camp Lejeune in North Carolina were providing equipment and paramilitary training to a violent Ku Klux Klan group known as the White Patriot Party.

Weinberger responded by issuing a directive stating that military personnel must “reject participation in white supremacy, neo-Nazi and other such groups which espouse or attempt to create overt discrimination.”

But many military commanders interpreted the rule as prohibiting only egregious forms of hate group activity, not mere membership or activities like distributing racist literature.

The issue arose again a decade later, after the Oklahoma City bombing and the ritualistic, racially motivated slaying of a black couple by neo-Nazi paratroopers stationed at Fort Bragg in North Carolina in late 1995. Following hearings by the House Armed Services Committee and an investigation by an Army task force, the Department of Defense amended its regulations to more clearly define the nature of prohibited extremist activities.

In 2006, the Intelligence Report revealed that large numbers of neo-Nazis had infiltrated the ranks. The report blamed relaxed wartime recruiting standards and ambiguous regulations. It quoted a military investigator who said he had identified and submitted evidence on 320 extremists at Fort Lewis in Washington state but that only two had been discharged. It also cited the case of Matt Buschbacher, a Navy SEAL who attended the 2002 leadership conference of the neo-Nazi National Alliance while on active duty. The SPLC alerted military officials to Buschbacher’s activities, but he was allowed to complete a tour of duty in Iraq and given an honorable discharge.

The SPLC, along with 40 members of Congress, urged Defense Secretary Donald Rumsfeld to adopt a “zero tolerance” policy toward white supremacists in the ranks. But the Pentagon did nothing.

Two years later, in 2008, the SPLC issued a new report revealing that 46 members of the white supremacist web forum New Saxon had identified themselves as active-duty military personnel. It quoted a racist skinhead who wrote on a neo-Nazi online forum that he had joined the Army and specifically requested an assignment where he would learn how to make an explosive device. “I have my own reasons for wanting this training but in fear of the government tracing me and me loosing [sic] my clearance I can’t share them here.”

Again, the Pentagon denied there was a problem and refused to act.

But the evidence continued to mount, and in February 2009, the threat became harder to ignore. Lance Cpl. Kody Brittingham, a Marine stationed at Camp Lejeune, was arrested and later charged with threatening the president after investigators found white supremacist materials and a journal containing a plot to assassinate President Obama among his belongings.

With no apparent action being taken by the Pentagon, in July 2009 the SPLC appealed to Congress to investigate. In a letter to committee chairmen with oversight over homeland security and the armed services, the SPLC presented dozens of additional profiles of active-duty military personnel on the New Saxon website. Those profiles included an individual who wrote that he was about to be deployed with the Air Force overseas and was looking forward to “killing all the bloody sand n------!” Another listed Adolf Hitler’s Mein Kampf as one of his favorite books. Many of the profiles included pictures of the posters in military uniform.

In November of that year, the Pentagon quietly tightened its policy on extremist activity, which formerly only banned “active participation” in extremist groups but did not define what that meant.

Under the new regulations, military personnel “must not actively advocate supremacist doctrine, ideology or causes” or “otherwise advance efforts to deprive individuals of their civil rights.” The new rules specified that “active participation” includes activities such as recruiting, fundraising, demonstrating or rallying, training, organizing and distributing supremacist material, including online posts.

The rule revision surely won’t eliminate all racial extremists or potential terrorists from the armed services. But it should make it much easier for commanders to investigate and discharge the likes of Matt Buschbacher.