It’s no secret that Michael Hill, president of the neo-Confederate hate group League of the South (LOS), is a racist with a deep-seated contempt for black people and a more-than-rosy view of his “Anglo-Celtic” landsmen.

It’s no secret that Michael Hill, president of the neo-Confederate hate group League of the South (LOS), is a racist with a deep-seated contempt for black people and a more-than-rosy view of his “Anglo-Celtic” landsmen.

The former professor, who for 18 years taught history at a historically black college in Alabama, has long opposed racial intermarriage, defended segregation as a policy designed to protect the “integrity” of both the black and the white races, and described antebellum slavery as “God-ordained.”

Despite all this, it has until recently been easy enough to dismiss Hill as a garden-variety bigot. But with a bellicose essay published this June on the LOS website, Hill revealed himself as a white supremacist with views that are essentially indistinguishable from those of the Klan.

White people, he wrote, are endowed with a “God-ordained superiority.” Black people “have never created anything approximating a civilization,” and it’s a “monumental lie” that all men are created equal. Slavery, he contended, was “successfully defended from a Biblical standpoint” until “the institution’s legitimacy was systematically undermined in the name of ‘equality’ and misappropriated ‘Christian ethics’” by the “War for Southern Independence” and all that followed.

“[I]nstead of whites owing black reparations for slavery and its alleged attendant ills … blacks in reality owe white America (especially the South) a debt that likely will be neither acknowledged nor paid,” he wrote. 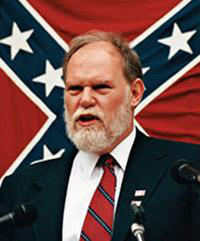 Hill has been moving in this direction for some time. Though the group was nominally non-racist when he and a batch of other white academics and Southern intellectuals founded it in 1994, its platform over the years has become distinctly white nationalist, with the stated goal of building a theocratic South defined by “the cultural dominance of the Anglo-Celtic [white] people and their institutions,” as Hill once put it. At the same time, its early rhetoric demanding that the rest of the country treat the South with more respect has been replaced with explicit calls for a second secession from the “ungodly” North. Beginning in 2007, when the national conference was titled “Southern Secession: Antidote to Empire and Tyranny,” each year has seen further and more militant dedication to that idea.

Hill’s own militancy was on full display at last summer’s national conference in Abbeville, S.C. “The mantra [that] violence, or the serious threat thereof, never settles anything is patently false,” he said, adding later, “He who is willing to die for a cause will defeat one who isn’t.”

His June essay, titled “Our Survival As A People,” seems to complete this evolution. “It is white Southerners themselves who must muster the courage to act and act soon,” he wrote, noting demographers’ predictions that whites will be a minority in America by the middle of this century. “If we are not willing to fight to preserve that glorious heritage bequeathed us by men of honor, genius, and principle, then we truly deserve the disinheritance that will befall us within the next half century.”